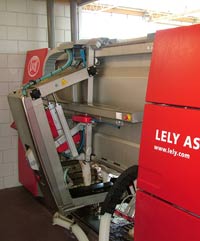 The latest phase in milk robot development by Dutch manufacturer Lely makes its new Astronaut A3 “Next” machine even more of a complete herd management aid.

Emphasis on udder health has brought more sensors for conductivity and temperature plus new 3-colour analysis of milk. “We now measure the green and blue spectra as well as the more normal red for increased information on udder health,” explains Lely marketing manager Coert van Lenteren. “This backs up the Astronaut’s unique continuous cell count recording from individual quarters.”

Fine-tuning the actual milking operation has Lely honing its proven variable pulsator speed system for individual quarters with pulsators moved nearer the udder on the redeveloped chrome-nickel-steel milking arm. Milking has been speeded up by a few percentage points and teat cups are removed 50% faster from the individual quarters after milking out, claims Lely. There’s also marked reduction in detection and correction time when a teat cup is attached wrongly.

Milk recording is no longer by volume in the collection jar. Lely says weighing is more accurate, now suspending the jar from a weighing cell.

The Astronaut’s X-Link terminal at the actual robot has a new touch-screen for easier-viewing of all functions.

Out in the cow barn, optional software with the new robot – or as retrofit on present Astronauts – offers cow-tracking via collar transmitters for on-screen position and movement information. New cow collars include sensors for determining cudding activity as well as body temperature as part of rumination/oestrous diagnosis.

Price for the A3 Next starts at around €110,000. But the list of optional extras – from automatic steam sterilisation to single quarter cell counts – is a long one, and marketing manager van Lenteren admits the price can climb to €125,000. “We like to talk about selling the robots in pairs nowadays for herds of 120-130 milkers and then we can say that delivered and fitted price for a pair (in The Netherlands) runs from €215,00 to €250,000.”

And long lists of optional extras are not the only point the Astronaut has in common with motor cars: Lely has announced a trade-in system for its early Astronauts starting in western Europe this year and administered by subsidiary Lely Taurus. Older models are taken in by Taurus, thoroughly renovated, and sold-on with a one year guarantee. “We reckon on a 15-year working lifetime for our robots but some customers are wanting to change over to newest models after seven or eight years,” says van Lenteren. “In fact, the farmer who bought our thousandth milking robot in 2000 is just now negotiating a trade-in for our latest model.”

The innovative Lely group now claims “a good 50%” of the world robot milker market with 7000 robots in operation in 29 countries at end of 2008.

Lely developed its first robot in 1992, although a further three years went by before first sales at the RAI farming exhibition in Amsterdam. Between 1995 and 1997 around 100 robots changed hands with the 1000th robot sold during the German EuroTier exhibition 2000 in Hanover. At a recently opened factory in Rotterdam, a staff of 100 currently assemble 40 to 50 Astronauts per week with production changing over to the A3 Next this summer. Emphasising the accent on innovation, the shopfloor team in Rotterdam is backed up by 50 R&D staff.