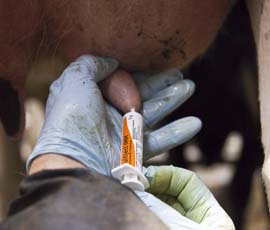 Speaking during a Farm Health Seminar at the Livestock Event Andrew Bradley of Quality Milk Management Services said not all cows needed to be treated with antibiotics at drying off.

Dr Bradley said it was worth identifying infected cows and treating accordingly. “200,000cells/ml is the natural threshold to use, so cows above that need a teat sealant and an antibiotic at drying off and those with a low somatic cell count just a sealant. However, if you want to be sure you are treating all infected cows then you can move the threshold,” he said.

However, Dr Bradley stressed if farmers were using an internal teat sealant by itself then cleanliness was paramount.
“A good test on cleanliness is to ask the question whether you are prepared to put it in to your mouth. If it is clean enough to put in your mouth then it’s ok,” he said.

Dairy farmer Robert Ham of Alston Sutton Farms, Somerset said he had three different groups for his dry cow therapy based on cell counts along with pre-existing data on intramammary infection.

“Our three groups are low, medium and high and we also look back at each individual cow’s last four somatic cell counts. Any cow with cell counts less than 100,000 are low risk cows and we just use a teat sealant and no antibiotics. Cleanliness is key here as there is no room for error,” he said.

Mr Ham explained that cows with 100,000 to 200,000 cells/ml  were medium risk and an antibiotic was given aimed at prevention of environmental bugs along with a sealant. High risk cows were classed as those with cell counts of more than 200,000 and received antibiotics aimed at curing. “We are confident these cows have an infection and so we use a long acting tube along with a sealant.”

Mr Ham has seen  a dramatic reduction in cows infected in early lactation since implementing the new system. However, Dr Bradley said it was imperative to monitor any effects when changing strategy. He also stressed the message that teat sealants were only one part of the picture.

“Teat sealants play a useful and important role in the dry period, but they are only part of the picture. Environmental management is key in dry cow accommodation along with aspects such as nutrition,” he said.