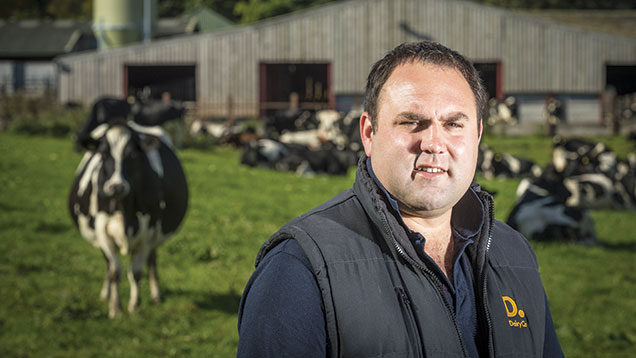 While milk prices are low, farmers should not “hunker” down on farm and ignore the outside world.

That was the warning from Tony Evans, head of business consultancy at Andersons, who said it was more important than ever for farmers to get on to other farms and see how they are managing their costs.

“The last thing you should be doing is hunkering down on your farm, which is a natural reaction when times are tough.”

Mr Evans warned any cost-cutting measures on farm must be backed by evidence and should not be made on a whim.

“Don’t do something without having the evidence. If you measure something it gives you the confidence to make a decision.”

Examples where measuring can save money:

He added: “Nearly every dairy has a maximum bactoscans of 50. A lot of farmers are hell-bent on having their bactoscan as low as possible, but what happens if that costs you more money but you get paid no more money?”

Dewsbury dairy farmer Tom Rawson has cut costs by switching to 16-hour milking after his milk fell from 37p/litre to 26p/litre.

At Mr Rawson’s second dairy unit in Market Rasen, Lincolnshire, where he milks 234 cows, he has switched from milking two times a day to milking three times in two days.

Cows are milked at 5.30am and 9pm and the next day they are just milked once, at 1pm.

It means Mr Rawson has been able to run the unit with one full-time worker and a relief milker – trimming labour costs by one-quarter.

“I had a contract milker milking at the farm but they have been successful enough to get their own tenancy.

“Given the cost saving I chose just to have one employee at the farm.”

Mr Rawson says he is also saving on electricity and water because the parlour is not running as often.

Despite the move, yields have only dipped by 0.27 litres/day.

“Sixteen hours is the optimum before cows start to lose milk, which is why we’re are not losing any milk.

“We have cut walking down by 25% over two days so this has put less stress on the cows and has increased lying times.

“In theory, solids production should go up because cows are doing fewer litres, so we are going to monitor this.”

Mr Rawson says this will help improve his milk price because he sells milk to Arla on a solids contract.

In fact, the switch is working so well that Mr Rawson plans on rolling it out to his home farm, where he is milking 260 spring calving cows, in the next few weeks.

“If you are a one-man band you get a lie in every other day so you feel more energised.

“It is very difficult to make good business decisions when you are tired all the time.”

Mr Rawson says it has also freed up time for him to spend with his young family.