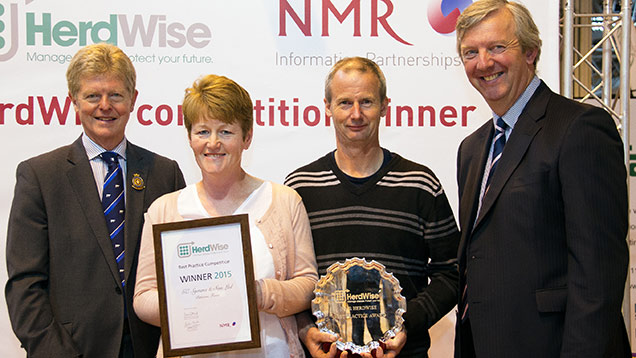 Robert and Bryony Symms, from Sherbourne in Dorset, have scooped the first NMR Herdwise award at the Livestock Event.

The inaugural award was presented to the dairy herd that has adopted the best management protocols to help control Johne’s disease.

The Simms’ 190-cow herd beat competition from 55 strong entries, which were whittled down to four finalists.

Judges Lyndon Edwards, chairman of the National Johne’s Action Group, and NMR vet Karen Bond, said they were highly impressed by the strong relationship the family had built with their vet to help get on top of the disease.

Mr Edwards added: “The Symms’ combination of a strong commitment to controlling Johne’s and great attention to the ‘small print’ within their control protocols was particularly impressive.”

The runners up were Tom and Karen Halton, who milk 600 cows in Congleton, Cheshire.

The Haltons milk three times a day and employ seven members of staff so standard operating procedures displayed around the farm have become critical in making sure consistent management protocols are followed by everyone.

Mr Edwards added: “On a larger farm, Tom and Karen Halton showed that a Johne’s control programme could be accurately followed by a team of workers.”