Irish boyband Westlife have sign up to be the next faces of Scotland’s ‘The White Stuff’ campaign.

The group will don the campaign’s famous white mustache on billboards and bus stops later this month to help promote the benefits of semi-skimmed milk as part of a balanced diet.

The band, who have topped the UK charts 14 times, join other famous faces who have taken part in the campaign, including Tennis ace Andy Murray, pop group McFly and model Nell McAndrew.

Launched in 2003, the campaign is a joint initiative between five of Scotland’s leading dairies and the Milk Development Council. It is also co-funded by the EU.

The spokesman for the Scottish Dairy Marketing Company, the umbrella group for the five dairies, said it was “fantastic” to have Westlife involved in the campaign.

“Scotland’s milk moustache campaign continues to go from strength to strength, and the addition of Westlife, who are arguably the biggest pop band in the UK at the moment gives us the opportunity to target a whole new audience,” he said. 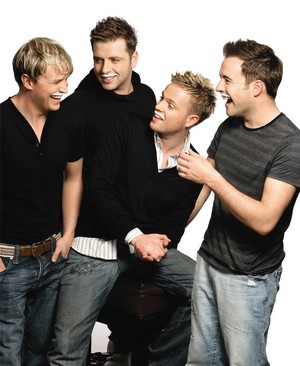 Westlife and their milk moustaches