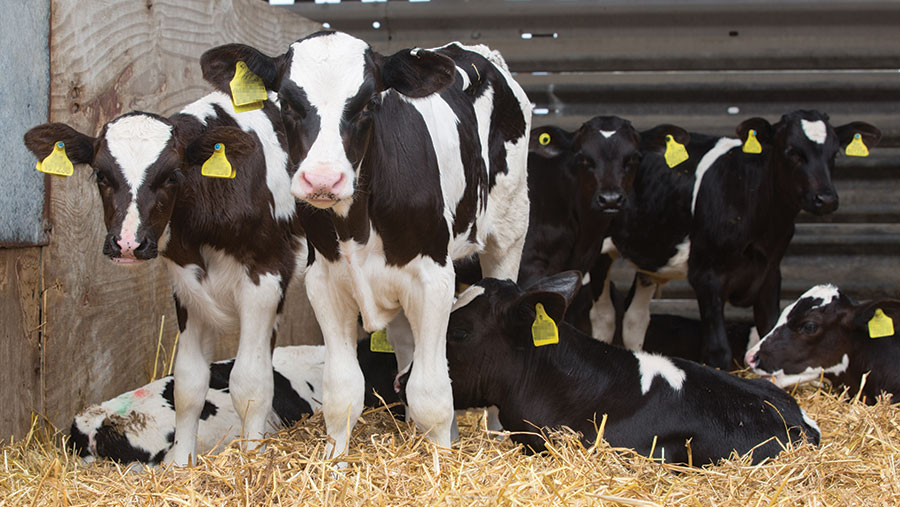 NFU dairy chairman Michael Oakes has urged the dairy industry to work together to end the practice of shooting bull calves – arguing it is a massive “own goal” for the sector.

Retailers, suppliers and producers need to engage with the government and the NFU to find a solution that does not adversely affect the beef market, he said.

The NFU says that 95% of dairy bull calves born are either reared for beef or stay within the dairy herd.

Mr Oakes was speaking at the NFU Council meeting in Stoneleigh, Warwickshire, on Tuesday (28 January).

“Shooting bull calves is potentially a massive own goal when we are talking about showing how great our industry is,” he said.

“We can either sit back and let everyone else deal with it or we can show some leadership at the NFU.

The main dairy processors, including Arla, Muller, Dairy Crest and Meadow Foods, have all indicated they want to stop bull calf euthanasia.

Mr Oakes added that the NFU had held several meetings with “key players” at their Stoneleigh headquarters.

The meetings included retailers and processors who could “help make the difference”.

To reduce the amount of bull calves born, the NFU says dairy farmers are using sexed semen to ensure they produce enough female dairy replacements and crossing with beef to ensure a higher-value calf at the end.

Reacting to Mr Oakes’ comments, John Allen, managing partner of the dairy consultancy Kite, said: “It makes economic sense for UK dairy to phase it out, without doing so we are going to have negative publicity.

“I just don’t think there is a choice because we won’t have a market in the UK if it continues.”

A firm commitment from the supply chain to support British would help alleviate beef producers’ fears of a flooded market.

One way of achieving this could be for supermarkets to find a way to put dairy bull calf meat on their shelves as processed meat.

Livestock farmer Sam Newington, who farms 230 head of cattle near Etchingham, East Sussex, believes that beef producers would need help from the government if more dairy bull calves were on the market, but that it was an opportunity to show the positives of British beef production.

He said: “I think the general public would not buy the argument we are shooting calves to increase profit.

“Can we grow the calves to a mature beef animal? Raise them to the higher standards we have in the UK and use this to push forwards our message of eat British meat, produced as locally as possible, to the consumer.

“If farmers are expected to change, it would be good if they had help in the form of funding a change from the government.

“I would like to see better food production and the public paying for it by buying the food.

“Outsourcing agriculture to other areas or countries means the public have less say in how that food is produced.”