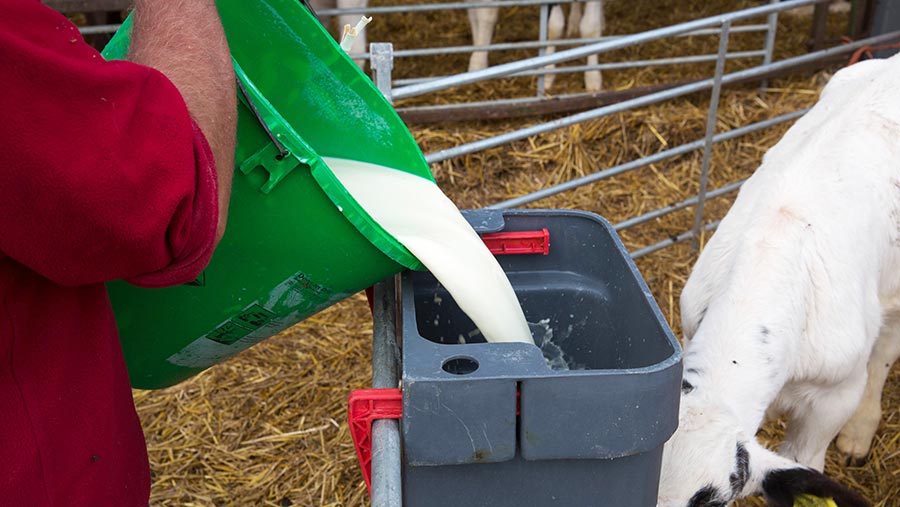 The additive is formulated from 100% natural essential oils extracted from the oregano plant, which has a well-documented history as an effective antimicrobial.

Already in use across a number of livestock species, researchers Partha Ray and Caroline Rymer considered whether an oregano essential oil product made by Anpario could be used to reduce the levels of AMR bacteria in the gut of calves fed waste milk.

Holstein male calves were given 10ml/day of Orego-Stim, split across two 2.5-litre milk feeds, starting from two to three days of age for 10 days.

Waste milk was taken from the university’s own dairy herd and was fed to calves from two days old for eight to nine weeks.

A control group of calves was fed the same waste milk without the addition of oregano essential oil.

After the 10-day trial, all calves received the same rate and ration of waste milk (without oregano essential oil) and concentrates up to weaning at eight to nine weeks.

The trial continued until day 78. Faecal samples were collected throughout the trial and analysed for E coli and enterococci species of bacteria, as well as these bacteria’s levels of AMR.

Analysis of faecal samples from calves fed waste milk without essential oregano oil revealed 44% of E coli was resistant to the cephalosporin.

However, AMR bacteria in treated calves accounted for just 12% of samples.

Anpario’s specific subspecies of oregano is grown in eastern Europe, where hard winter frosts and hot summers combine to produce crops with the ideal chemical composition.

The whole plant is harvested and steam-distilled to release oil containing the key antimicrobial components.

This oil is then incorporated either into a powder carrier, for mixing into feed, or as a liquid emulsion.The liquid emulsion can then be administered in milk, at the point of feeding, via buckets or through machines.

Explaining the importance of the trial, vet and Anpario’s corporate development director, Helen Houghton, says it is vital to “ensure antibiotics remain in our armoury to combat bacterial diseases”.

Feeding waste milk to calves is an area identified as a serious risk factor in the transfer of AMR by the European Food Safety Authority, Dr Houghton says.

“We are transferring AMR bacteria straight into young calves, where they proliferate and colonise the gut. If we need to treat them with antibiotics later, we will have problems,” she warns.

Resistant bacteria can also pass into the environment via faeces, which in turn can infect other animals or humans. This could jeopardise the future effectiveness of these vital drugs, both in human and veterinary medicine.

Despite the risks, feeding waste milk to calves remains common practice on many dairy farms globally. Milk from dairy cows treated with antibiotics can’t be sold for human consumption and is therefore withheld from bulk tanks, Dr Houghton explains.

“It is seen as a valuable feed for youngstock and, if it wasn’t used in this way, could present a problem with disposal,” she adds.

But the milk can contain resistant bacteria from treatment of disease in the dam, such as mastitis.

“We need to reduce the risk of AMR and this is where oregano essential oil can play a key role,” Dr Houghton says.

Oregano essential oil is a proven broad-spectrum antibacterial, through the action of key components, including carvacrol and thymol.

The trial also demonstrated a reduction in the abundance of gram-negative bacteria, such as E coli, in faecal samples from calves supplemented with oregano essential oil, most likely as a result of the action of components, such as carvacrol and thymol, on calves’ gut microbiota.

Dr Rymer says: “There is always concern that feeding supplements with antimicrobial activity could encourage development of AMR if the mode of action is similar to that of an antibiotic. We were pleased that there was no evidence of increased resistance, and that resistance to an antibiotic as important as cephalosporin was reduced.”

Co-researcher Dr Ray adds: “We need to confirm that long-term use of additives with antimicrobial properties will not contribute to AMR development the way overuse of antibiotics did. We need to understand mechanisms underlying the effect of oregano essential oil on AMR to make feeding this additive amore sustainable practice.”

Feeding waste milk can spread disease. Vets and other authorities have set out rules and best practice tips to reduce the risks.

Government information
Comprehensive rules are covered on the government’s website within the section “Feeding milk and milk products to farm animals on your farm”.

Responsible Use of Medicines in Agriculture Alliance (Ruma)
Ruma has stated waste milk (excluding colostrum) from cows under the statutory withdrawal period for antibiotics should not be fed to youngstock.

Based on current evidence, it is recommended that a practical solution for on-farm disposal is to add waste milk to the slurry pit.

TBHub.co.uk
Farms should only feed waste milk to calves if it has been boiled or pasteurised. Infected cows can excrete the M bovis bacterium in milk. As well as being a source of infection for people, calves fed milk from infected cows are also at risk of developing bovine TB, and severe outbreaks in calves have occurred through this transmission route. Never feed milk from another herd, as TB-infected cows may be present, even if the herd is officially TB free.

Vet view: Farm vet and TB advisory eradication board for England member Sarah Tomlinson
Waste milk can spread disease such as Johne’s and TB. It is best practice to only feed the mother’s colostrum and only then if it is confirmed as being free of Johne’s and, on a farm, free of TB reactors. Contact your vet to discuss the risks and for bespoke advice on disease management.