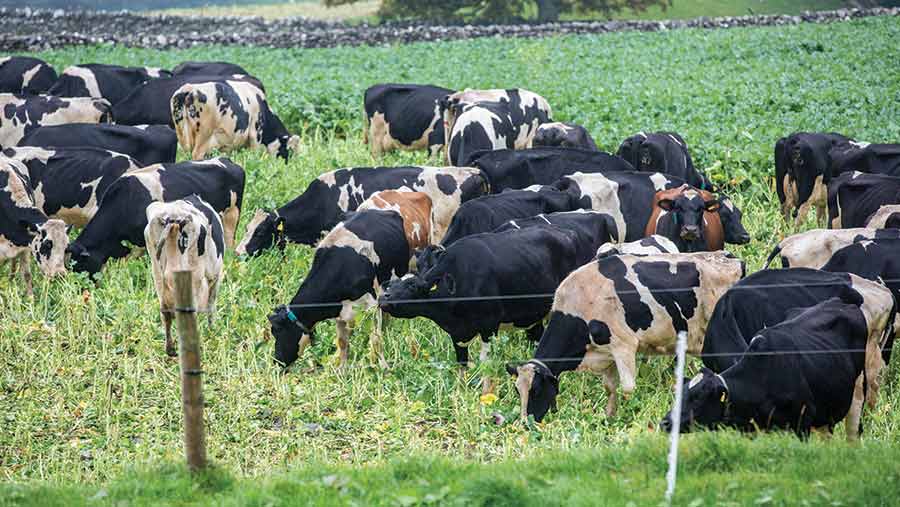 Welsh borders farmer Marc Jones successfully uses kale to outwinter 320 dairy heifers he rears on contract every year on about 12-14ha, cutting costs down by 30-35% compared with keeping them indoors.

The heifers arrive on the farm at eight to nine months old on 1 November and leave as in-calvers exactly a year later.

Heifers spend about four months outside grazing the kale and the aim is for 50% of their dry matter intake to come from the kale and the rest from round-bale silage, explains Mr Jones, who farms at Trefnant Hall, Berriew, Welshpool.

The heifers graze the kale crop along an electric fence, which is moved daily. A second fence is always in place to assist in the daily fence-moving operation and open up the day’s allocation.

The appropriate number of round bales of silage needed to be fed during the period the heifers are grazing the kale is calculated and put in position after silage-making in June.

By this stage the kale has already been direct drilled into permanent pasture that has been sprayed off.

“That means the round bales are exactly where we want them to be and can be easily moved into the ring feeders during the winter,” says Mr Jones.

“We budget for 10 tonnes of silage and 10 tonnes of kale to be produced a hectare, and although it does vary from day to day, we reckon on five or six bales of silage will be needed daily.”

The entire bunch of 320 heifers grazes as one group and gets a 10m strip of kale a day plus the round-bale silage.

Although the kale is grown on land up to 1,100ft, the ground is light and shaley. The heifers have no shelter.

“We keep a lot of sheep outside on swedes in the winter and so keeping cattle outside on a similar system was really the next step.

“The farm that we take the heifers from was already using kale, so we adopted the same system,” says Mr Jones.

“We’re aiming for a liveweight gain of about 0.4kg/day, but the secret of the system is the compensatory growth we expect in the spring.

“We want the heifers out on to grass as early as we can, say around late February. After that they start to gain at around 0.9kg/day.”

The heifers have about two months on grass before bulling, with the aim of calving at two years old.

“The big advantage is the cost saving compared with housing the heifers, but there’s also a saving on labour.

“The system we run takes one man 50 minutes each day to move the fences and the round-bale feeders – and just 30 minutes if there are two of us.

“If we had these heifers inside it would take three or four hours.”

Mr Jones says the heifers settle quickly on to the kale and don’t suffer any digestive upsets, provided they are gradually introduced over a four-to-five day period.

“They always have access to the round bales during that time. There can be a few problems with weight gain if there is a long spell of really bad weather, but hopefully that doesn’t happen too often.

“The younger heifers can be a bit more delicate when the weather is bad. By mid-February we expect the average weight of the heifers to be around 250kg.”

The kale is direct drilled into permanent pasture which is treated with Roundup in late May. The newly drilled kale receives 3cwt/acre of a 16:16:1 fertiliser.

Kale is a flexible fodder crop that can provide grazing from June through until the following March, but is gaining popularity as an outwintering option for dairy heifers. Kale should also be valued for its role within a rotational grazing policy.

It is important to plan ahead when considering growing kale and to calculate how much the crop can provide in terms of dry matter based on the number of heifers being overwintered.

Straw or haylage must also be provided to provide at least 25% of the heifers’ dry matter intake.

It’s advisable to take a soil test eight weeks before the planned sowing date and to drill directly into glyphosate-treated swards. The aim should be to achieve a pH of 5.8 and P and K indices of 2.

Although stock must have continuous access to drinking water, it’s important to organise fencing to deny stock access to water courses.

And where kale is grown for winter grazing it’s essential to have an alternative plan for feeding stock should there be a prolonged spell of bad weather.

Using a one meter square frame and a seed bag use garden shears to take several samples of the crop from different fields from within the frame cutting at about 10cm from the ground.

Use the scales to record the crop weight/sq m and to calculate dry matter yield/ha simply multiply the fresh weight/sq m by 10,000, then multiply by the expected crop DM percentage.