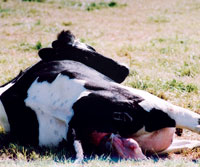 Getting a batch of heifers to calve together (either naturally or through synchronisation), doesn’t stop with a positive pregnancy test.

Calving must be planned as well to overcome the challenges of coping with a large group of first-time mothers.

And because a heifer takes longer to get through the whole calving process, she’s also more likely to need assistance.

The end result can be uterine infection in the heifer, plus a dead calf or a dopey calf that’s susceptible to disease. In addition, a calf born as a result of an assisted calving can be oxygen starved and slow to stand and suckle, says SAC vet investigation officer Colin Mason.

“Colostrum absorption also takes longer, so the calf is likely to be less viable and, because it is more susceptible, calves born to heifers are more likely to go down with scours.”

Multiply these time-consuming problems by the number of heifers calving together in a short space of time and it’s not hard to see where stress levels rise. Too often, however, producers fail to anticipate these risks – and staff requirements – at peak calving times. “Suddenly staff have a batch of 20 heifers to calve, as well as the cows and routine work, and this creates pressure on the system,” he says.

Where heifers have been bred to calve together, Mr Mason believes it’s possible to predict these challenges and cater for them. “Planning for a group of heifers coming through means maximising space and minimising the risks, as well as ensuring calves get enough good-quality colostrum.”

Good sire selection is an obvious starting point to ensure calvings are relatively easy. However, Mr Mason finds a key issue is usually a lack of space in the calving pen. Overcrowding quickly leads to a dirty environment putting a heifer at risk of her first case of mastitis, plus metritis and endometritis from her assisted calving.

Trough space is also at a premium and, for heifers calving in among mature cows, bullying can also result in them shying away from feeding. “Space is vital – there should be enough for heifers to calve down in a clean spacious environment – at least 12sq m a cow in the transition yard.”

Colostrum supplies can also be lacking in heifer dams – it’s often perceived as being of poorer quality and there isn’t enough of it. Mr Mason advises milking a heifer right out, not just taking a litre or so. “Within the first six hours of calving milk a heifer right out so her colostrum is as rich as possible and can be used for other calves,” he says.

“It’s possible to use cow colostrum as a supplement, but only from cows tested consistently negative for Johne’s to reduce the risk of transferring infection. It’s also important to harvest (avoiding faecal contamination) and store it (containers with lids) hygienically, to reduce the risk.”

Another option is to time heifer calvings to coincide with a mature cow group. This ensures a plentiful supply of quality colostrum and a calmer milking. It is much easier to get heifers into a milking parlour when they are with experienced, mature cows, says heifer specialist Sam Leadley, Attica Vets, New York.

Dr Leadley recommends using a colostrometer to estimate the value (antibody quality) of all heifer colostrum. “In a group of well-vaccinated heifers probably half of them will have good quality colostrum that can be used successfully as the first feed for newborn calves,” he says.

Failing that, cow colostrum can be fed fresh or frozen for later use as frozen antibodies keep for up to a year. Colostrum should be chilled to 16C within 30 minutes after it comes out of the cow, before freezing. “This extends the generation time for coliform bacteria from 20 minutes at cow body temperature, to 150 minutes at 16C. The colostrum can be packaged for freezing in self-sealing double-wall plastic freezer bags. If you fill each 4.5-litre bag with only one litre, it will freeze and thaw more quickly.”

Experience has taught Kent producer Jeremy Wilson that preparation is the key to calving down heifers – particularly on a one-man unit running 80 cows. He believes some sires have an effect on calving time, so keeps a closer eye on heifers in-calf to particular bulls. He also takes the pressure off straw yards in summer by turning heifers out during the day. “Feeding forage in the evening shifts more calvings to daytime, making it easier to be on hand to assist,” he says.