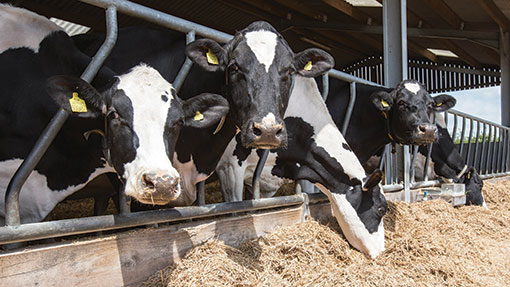 New research by Agrisearch underlines the importance of drying cows off at the right time. Jeremy Hunt takes a closer look.

Trying to adjust the body condition of dairy cows during the transition period by varying concentrate feeding levels does not produce any significant benefits, according to a two-year trial involving 1,200 cows across 10 herds.

The results of the trial, conducted by Agrisearch, have further highlighted the need for cows to be dried off at the target condition score required for calving.

The two-year trial involved herds with yield averages of more than 8,000kg and saw cows managed on one of three regimes at drying off.

“Within both condition score groups, cows that were offered no concentrates during the dry period lost slightly more body condition than those offered concentrates,” the report states.

“However, this effect was so small that it was of no practical importance. In addition, offering concentrates during the dry period had no long-term effect on body condition score changes after calving.”

The benefits of feeding concentrates during the dry period remain unclear, according to the trial’s findings, even though it is often recommended as a means of improving body condition and helping to prepare the rumen for feed regimes offered post-calving.

The results show it is “extremely difficult” for cows to gain body condition during the dry period even when concentrates are offered.

“Intakes of dry cows fall during the weeks prior to calving, with dry cows frequently entering negative energy balance at this time. This emphasises that cows should be dried off at the condition score at which they should calve.

“In the case of cows that are managed on high concentrate input systems post-calving, the target condition score at drying off is 2.75. Feeding concentrates to cows at the levels adopted within this study (2-4kg a cow a day) is unlikely to result in any substantial gain in condition score during the dry period.”

Thin cows (condition score 2.25 or less) and fed a forage-only diet during the dry period had an increased risk of being culled during the first 60 days of lactation, according to Agrisearch, which states that some of these thin cows could be saved with improved feeding and management.

The report says cows with a low condition score (2.5 or less) at drying off tended to give birth to lighter-weight calves.

These cows did show slightly improved fertility compared with cows that were dried off with a moderate to high condition score.

Herd-specific diets are vital to success

Silage grass that is grown specifically for feeding dry cows is the key to the successful transition management regime operated by Northern Ireland milk producer Thomas Steele, whose 450-cow herd was involved in the Agrisearch trial.

The herd’s cows have a 60-day dry period and begin in the far-off group – apart from those scanned with twins, which are moved immediately into the close-up group.

The far-off cows are given second-cut silage and a dry cow mineral, but no concentrate. At three weeks pre-calving, the cows are moved to the close-up group and fed silage specifically grown for this period of transition management.

“We grow 10 acres of grass that receives only nitrogen, but no compound fertiliser or slurry, with the aim of reducing any phosphorous content. We leave this grass for three to four weeks longer than our normal first-cut to give us more fibre. Applying no slurry or compound has helped us reduce retained placentas and milk fever,” says Mr Steele.

The close-up group also receives 3kg a head a day of a low-protein blend.

Condition scoring is an important part of the herd’s transition management, and cow body condition is assessed eight weeks before drying off, with the aim of starting the dry period with a score of 3. Feeding in late lactation is adjusted accordingly.

“We’re aiming for a condition score more on the thin side of things than fat and we’d rather be drying off at 2.5 instead of 3.5. The results from the trial are suggesting a lower drying-off condition score, but we feel it’s a lot harder to get a cow going again if you dry them off when they are too thin. Our aim is to calve down at condition score 3.

“We think it’s very hard to dry off a cow and put her on to nothing but straw to try and get her to lose some condition. The problem is that when this type of cow calves down and moves back into the herd, she just goes to pieces. And we’ve found that if you dry off at condition score 2 it’s very hard to get 0.5 back on.”

Mr Steele’s current system for dry cows has been in place for three years and is working well. “We’ve tried other ways of doing things but this works for us.”

While he says he doesn’t want to be too critical of the Agrisearch report, he does feel there seems to be desire to promote a transition management system based on feeding dry cows a forage diet with no concentrate.

“There are individual cows that will be OK on that regime, but I still think that if you want to set a cow up for its next lactation you’ve got to be prepared to feed her something to give her a good start and get her going.

“I think if you expect a cow to move into the milking herd and be fed a high-quality diet – and yet she’s coming from a dry period where she’s had very little – I think you are heading into trouble,” he says.

“Every herd is different, and when it comes to transition management it’s a case of striking a balance and not being too extreme. Dry cows should not be looked at as the poor relations when it comes to diet and comfort.

“We have our dry cows on water mattresses and that’s why we decided to dedicate a specific silage to them to suit their needs.”