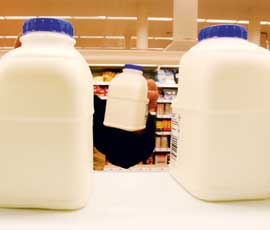 Campaigners against a badger cull to control bovineTB have suggested they will boycott milk and dairy products from farms involved in the trial.

Farmers Weekly asked the major retailers to outline their stance on sourcing product from farmers.


“We take animal welfare very seriously; it is a top priority for us and our customers. There are animal welfare issues on both sides of the debate and this understandably makes it a very difficult issue. The government has been through due process and has concluded to go ahead based on scientific evidence.

“Bovine tuberculosis poses a significant threat to the health and welfare of British livestock as well as the livelihoods of many beef and dairy farmers. According to the government, in 2010 and 2011, over 50,000 cattle had to be slaughtered in England in an attempt to control the disease.”

“We will continue to take milk and beef products from farmers across the country, including those in the areas where the cull is taking place. In terms of taking on new farmers, our process for new suppliers will remain the same.”

Waitrose has said that participation in the pilot cull is for farmers themselves to decide and would not affect the supermarket’s sourcing of milk or beef and neither would it be an issue when taking on new suppliers. A spokesman said: “Our farmers know best how to run their businesses and it is right that decisions around the pilot cull are left to them to make.”

“Animal welfare is an important and sensitive issue for many of our customers and we take our responsibilities in this area very seriously. We also recognise the significant threat that bovine tuberculosis disease poses to our dairy farmers and their livelihoods. We are committed to supporting them through this challenging time and have no plans to stop sourcing from farmers in the affected areas. The cull policy and its implementation are a matter for government and the farming community.”

The Co-op said its position on the cull was neutral. A spokesperson said: “Animal welfare issues are important to The Co-operative Group and its members and customers, as is ensuring a long-term, sustainable future for British farmers. None of the farmers within The Co-operative Dairy Group are located in the proposed trial areas. However, as we do not operate a segregated milk supply chain, in common with other retailers a small proportion of our milk may have come from farms in the proposed trial areas.”

“We are aware of the debate on a badger cull, however as a retailer it is a matter we have never taken a view on, and we don’t anticipate this changing. Nevertheless, we understand and acknowledge the genuinely held beliefs on both sides of the argument. We have no plans to change our sourcing strategy.”

“Our priority is our relationships with our farmers, and we have no plans to change our long-standing sourcing policy. We understand the TB issues facing the farming industry and that a solution needs to be found. We are awaiting the results of the government trial.”