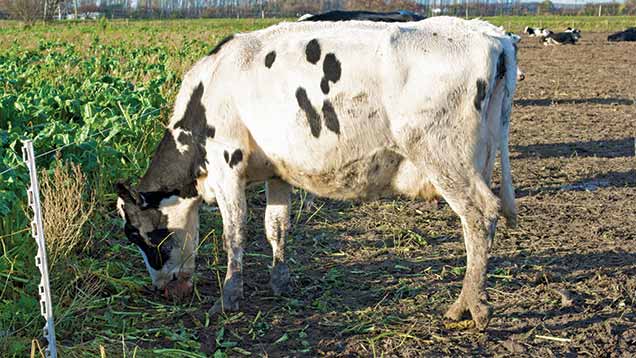 Outwintering in-calf heifers is a viable option for high-yielding herds looking to reduce costs and has now been shown to have no negative effect on future milk production and fertility.

AHDB Dairy research carried out at Harper Adams University shows that, with careful planning and management, in-calf heifers destined for high-output TMR system yielding 9,600kg a cow a year, can be successfully outwintered.

In doing so, overall costs can be reduced by 40-60% when compared with a housed system.

As part of the trial, 48 heifers of about 23 months old were split into three groups:

Fodder beet was planted on a sandy, gently-sloping field and included a hybrid ryegrass runback as a lying area, with baled silage delivered from an adjacent track. Heifers were strip-grazed down the slope.

Grass was put aside for the grazing group in October 2013, with the aim being to provide 3,500kg dry matter (DM)/ha of herbage mass.

Two fields were used: the main field was split lengthways, with a narrow grass track running down the middle and bales placed 1-2m either side of the track.

This was designed to limit high traffic to this strip. Heifers were also strip-grazed. On both systems, big-baled silage provided 35% of the heifers’ daily dry matter intakes.

Outwintered heifers were ­outside for 90 days from the start of November 2013, before being housed six weeks prior to calving. Performance was then monitored for the first 12 weeks of lactation.

Liam Sinclair, professor of animal science at Harper Adams, says results showed no negative effect on subsequent milk yields or fertility when comparing both outwintering options with the housed system (see table below).

However, during the outwintering period, heifers on the grass system had lower liveweight gains of 0.96kg/day, compared with 1.24kg/day on the fodder beet and 1.11kg/day in the housed group.

This highlights the importance of careful monitoring and management, says Prof Sinclair.

See also: Why outwintering is a challenge for one Farmer Focus writer

“The body-condition score of heifers that received grass was also lower at housing and parturition,” says Prof Sinclair, who puts the variation down to wet conditions and the fact a back fence was used in the grazing group, so there was no dedicated lying area.

Prof Sinclair explains that whether a farm plans to reseed or graze a field the following season will influence management strategy.

Either way, regularly weighing animals is crucial to identify any drop in weight gains so appropriate supplementation can be provided, he reiterates.

“We noticed a drop in weight gain after Christmas so we provided supplementary concentrates. We wouldn’t have noticed this if we hadn’t monitored,” he says.

The effect on milk quality and yield

Although subsequent milk yields were not affected by the different feeding options, there was some variation in milk quality – with heifers fed on fodder beet producing less milk fat, and more milk protein (see table above).

This may be a consideration for farmers on constituents-based contracts.

However, in actual amounts, the difference was small and overall milk solids were similar between treatments, adds Prof Sinclair.

He says initial data analysis suggests potential feed cost savings from outwintering of about 80-90% versus housing.

He says reducing costs is relevant to all systems, particularly considering the low milk price. However, outwintering could be particularly attractive in expanding herds.

See also: Why Kiwis are switching to housing cows

“Putting up buildings is expensive, so if you can put milking cows in existing heifer buildings and turn heifers outside, you can save on costs,” he says.

“You could potentially save £150 an animal in capital cost by outwintering for three to four months versus putting up a ­dedicated new heifer building.”

But he says this will depend on where you are in the country and will also vary from farm to farm.

What to consider when outwintering heifers this year

There is still an opportunity for dairy farmers to save costs this winter by planning to outwinter heifers on deferred grazing, hybrid brassicas or turnips planted in mid-August.

Liam Sinclair of Harper Adams University says planning and attention to detail are essential to get the most from these types of crops. They should be viewed as low-capital systems, he says, rather than low-input, and suggests the following to ensure successful heifer outwintering: