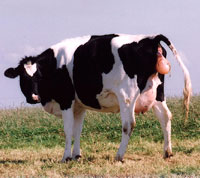 It may be more expensive, but sexed semen is certainly paying its way with demand for milk and in calf heifers still dominating dairy sales across the UK. But, like every technology there are often mixed reviews.

Poor conception rates, too many bull calves and cost are just some of the thoughts farmers may have about the technology. Nevertheless, with age comes progression, with recent results from a study suggesting conception rates from sexed semen are almost as good as those from conventional semen, according to Genus’s Hugh Ratcliffe.

Results collected by Genus ABS technicians over the last 12 months found only a four percent difference in conception rate between sexed and conventional semen, with the average non return rate for all services performed 74% compared with 70% for sexed semen.

“This four percent difference is better than expected, says Mr Ratcliffe. “You will always get a slightly lower conception rate with sexed semen because of the sexing process resulting in fewer numbers of sperm in each straw. But, as long as you follow guidelines when using it, you can definitely make more money using sexed rather than conventional semen.”

Better conception rates are likely down to better semen sorting and freezing methods, he says. “Over the last 10 years improvements have been made to how sperm is sexed and frozen, meaning there is now little difference in conception rates between the two.”

And with heifer prices forecast to remain high throughout 2010, using sexed semen is definitely going to pay off. “Not only is it cost-effective, it gives the customer more control about where they get heifers from, with 90% female sperm in the straw,” explains Mr Ratcliffe.

But the 90% chance of getting a heifer calf from sexed semen isn’t the only benefit, according to dairy farmer, Mark Button.

“One of the biggest and most surprising benefits has come from easier calving as a result of using sexed semen. Because heifers are easier to calve it also has future effects on the conception of the mother, who is less likely to have problems getting back in calf,” says Mr Button who milks 800 cows near Bodmin, Cornwall.

But the initial reason Mr Button began using sexed semen was to speed up genetic progress. “At the time of using sexed semen we wanted to speed up genetic progress, but as well as this we were under TB restriction, which meant we were shooting a lot of bull calves. Sexed semen enabled us to reduce the number of bull calves and also breed more of our own replacements.”

However, the key to getting such high conception rates from sexed semen is by careful management, says Genus technical services director, John Cook.

“Several factors are involved in getting good conception rates. It’s not just about correct semen handling and AI technique, which is important, conception rates can also be influenced by animal health considerations. It’s all about minimising stress.”

Mr Cook advises for cows to be at condition score 2.5-3 at insemination, have no metritis or mastitis, have low levels of lameness and for heifers to be on a stable plane of nutrition six weeks before and after insemination as well as maintaining animals in stable social groups.

But handling semen correctly is also important particularly with sexed semen, he says. “When you don’t thaw the semen for 30 seconds at 35C, the recovery rate of semen can change and you want this to be as high as possible. When the recovery rates fall below 30%, conception rates can crash.”

“But that’s not to say you can’t use sexed semen in cows,” says Mr Cook. “When you have got a good handle on reproductive management, there’s no reason it can’t be used.”