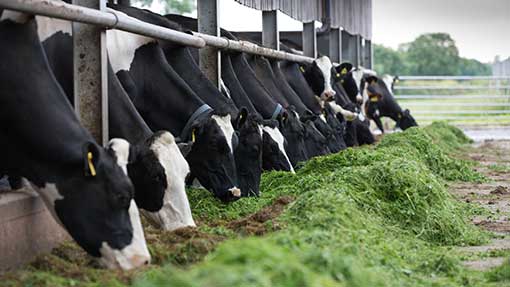 Treating grass silage with an inoculant containing a unique strain of lactobacillus can improve dairy cow fertility, research has shown.

A study involving more than 100 herds and 25,000 cows showed treating silage with the bacterial strain Lactobacillus plantarum aber F1 delivered a 10-day reduction in calving to conception, worth a potential £50 a cow.

In total, 49 herds (11,621 cows) were fed grass silage containing the strain. The remaining 54 herds (13,415 cows) were fed untreated silage or silage treated with other additives.

Cows fed silage treated with Lactobacillus plantarum aber F1 (Powerstart) had a mean calving interval of 125 days compared with other herds where the average was 135 days.

The inoculant is a fructan-degrading strain, which means it can access more sugars to fuel rapid fermentation.

“By accelerating the rate of fermentation, it ensures the protein in the grass is preserved more effectively, with a higher proportion of true protein and fewer free amino acids or ammonia [broken down], while ensuring higher sugar levels,” explains Genus’ Paul Nunn.

When feeding silage, the consequence can be an imbalance in the rumen, with too much nitrogen released and a shortage of rumen-available energy to use the nitrogen. This results in a significant increase in ammonia production, which is excreted as urea into the blood.

Treating silage with this bacterial strain improves the balance of sugars and true protein, which results in a more effective rumen fermentation and leads to reduced blood urea levels.

“In conjunction with negative energy balance, high blood urea levels have an effect on fertility in dairy cows by affecting hormone levels and uterine conditions, so prejudicing cycling behaviour and embryo survival.

“It has been said that cows with high blood urea levels cycle less frequently, with longer intervals between each heat period. Furthermore, high urea levels are known to have an effect on the development of the egg in the ovary and can have a negative effect on conception rate.

“In addition, research shows blood urea levels have a direct effect on progesterone production and on the conditions within the uterus. These can mean there is a reduced likelihood of a fertilised egg implanting in the uterus and developing into a successful pregnancy.”

Mr George says anything that can reduce blood urea to an optimum level can have a positive effect on dairy cow fertility and advises keeping a close watch on milk ureas, which are an indicator of blood urea levels.