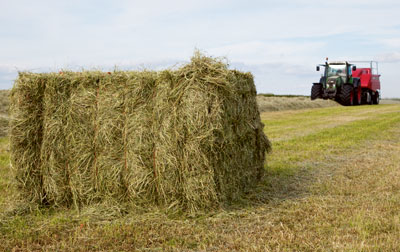 Dry cows strip grazing a standing crop of hay are saving between 70p and 80p a cow a day, while at the same time maintaining rumen fill.

Rather than baling long stemmy grass for silage or hay just to feed it back later, the cows are harvesting it themselves. And the paddock doubles up as a calving area.

Life is simpler and cheaper, says Lydney Park Farm’s herd manager Keith Davis. Time taken to feed dry cows is an estimated 10 minutes to move the electric fence, roll the ring feeder over the top of a round bale and remove the wrap. “Cost savings are in housing, bedding, feeding and labour. We could save more if we didn’t feed silage and it would be quicker. But we need to eke out the grass,” he adds.

When the 480-cow herd near Chepstow, owned by Lord Bledisloe, changed to a grazing system, the plan was to calve the autumn block outside and keep cows grazing for as long as possible. “What we are after is long fibre and gut fill to prevent DAs, with enough energy to supply the dry cow’s requirements,” explains Mr Davis. “Grazing a standing hay crop seemed like a good idea in that we didn’t have to house cows to calve them, then turn them out again to graze.”

Ideally, Mr Davis would like to rotate the calving paddocks, but logistics mean that just 5ha are close to buildings and handy for the parlour. However, he maintains that despite calving 180 cows on the same area each year, there isn’t a disease burden. Most cows calve on the freshly-eaten new break: “They tend to eat grass first, then the bales, then calve on the fresh stubble,” he adds.

The hay paddocks fit normally into the grazing rotation before being shut up in the first week of June and fertilised as if for a silage crop with 45kg N/ha. No P or K are necessary because of previous slurry applications. Grass is then allowed to grow tall and bulky, producing seedheads. Two weeks before calving, cows are moved in. By this stage the grass is human knee-high and green; within two weeks, it has turned brown.

Mr Davis says it is like hay prior to cutting. “It is not 12 ME grass and is of poorer quality. It is also a different product at the start of grazing, compared to the final grazing because it has been shut up for four months by then,” he says.

He moves the electric fence every 24 hours to give 4kg DM a cow a day with a further 6kg DM a cow a day coming from big bale silage fed in ring feeders. In addition, each cow gets an extra 1kg of a high-quality dry cow roll along the fence line, with magnesium chloride added to water troughs. Again, in an ideal situation, Mr Davis says cows would graze standing hay for their full eight-week dry period. Instead, for the first six weeks they are on long stemmy grass. This is grown off the grazing platform on SSSI land, so it hasn’t had a boost of fertiliser, but is allowed to go to seed. Strip grazing rations each cow to 10-11kg DM a cow a day plus the dry cow roll.

North Devon producer, Gavin Fowler is also feeding hay as a standing crop and has found it not only keeps cows full of long fibre, it helps prevent night-time calvings.

Over the past 15 years, he has found that moving the electric fence at 6pm results in 90-95% of cows calving during daylight hours. They spend their nights eating and digesting forage.

Mr Fowler has also learned that it’s important to keep cows stocked tightly on paddocks of standing hay. “It makes them eat the whole lot and not just pick at it,” he explains. “We did this to cut costs and I wanted to calve outside without too much work. We’ve got six fields so we can rotate them to reduce the disease risk and we get very healthy calves and cows. With 240 cows calving (15 a day) in September and October, it’s easier to let them do their own work.”

Paddocks are set up in June and July, fertilised to grow long stemmy grass that reaches 18in tall and goes to seed. “Cows eat both seed and stem and in September and October there is a bit of regrowth with clover in the bottom.”

In addition to the standing hay, Mr Fowler feeds 2kg a cow a day of a dry cow nut plus minerals on the ground, with ad lib wheat straw in round feeders.

• Fertilise as for silage