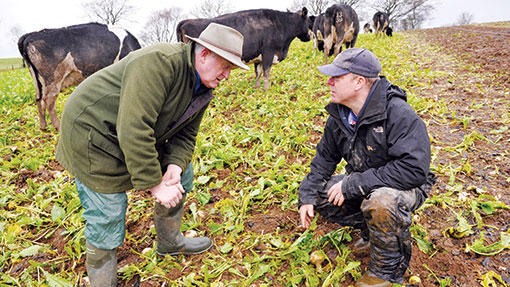 One Welsh farmer is using turnips to manage late calvers and earn environmental scheme points too.

Growing a winter forage crop can bring benefits to dairy systems, even when it costs more than housing stock.

At Pentrefelin Farm, Talsarn, Ceredigion, the Jenkins family outwinters late-calving dry cows on stubble turnips. The land is rented and the crop provides the owner with points towards a Glastir agreement.

At £3.11 a cow a day it is more expensive to graze the animals on the turnips than to house them at £2.50 a cow a day, but there are wider benefits to the system that made it a worthwhile approach.

It enables the Jenkins family to run a group of late-calving dry cows away from the main spring-calving herd and it also acts as a break crop in their reseeding programme.

It has also allowed for herd expansion to 375 cows without the need for capital outlay on new housing.

The seven-acre crop was planted at the end of June, on a south-facing slope at 900 feet, and first grazed in mid-December – two weeks later than had been planned because the herd was dried off later to capitalise on the good milk price.

The rented land is an important part of the system therefore the cost of growing the crop can be justified, says Eurig Jenkins, who farms with his father, Aeron, and brother, Irfon.

“It is part of our reseeding policy, we will reseed with grass once the crop has been grazed. The land was previously used for sheep and beef and we need to improve the soil fertility.

“There is some waste with the roots because they have been grazed in what has been an exceptionally wet winter, but this will provide some valuable green manure when we plough.”

The herd started calving on  1 February, but the 30 cows which graze the turnips aren’t due to calve until the end of March. “It is a good means of managing our late calvers away from the main herd,” Eurig adds.

The crop is split into blocks of approximately 600sq m to provide 45 days worth of grazing.

The cows graze the turnips for five days and on the sixth day they are turned on to an area of deferred grazing runback. A big bale of long chop silage is provided daily to supplement the crop.

The crop and cows had performed well despite the site location and exceptional levels of rainfall. “If it can work here in a winter like we have just had it can work anywhere,” says Eurig.

However, the weather has influenced use. He had budgeted for 80% use but only achieved 65%.

The crop yielded 7t DM/ha; the alternative option of deferred grazing would have needed about three times the acreage to support the cattle.

There are also other benefits; there is no slurry to spread as is the case in-housed systems and animals are unlikely to have a growth check compared to animals turned out for the first time in the spring.

It can also help farmers secure a Glastir agreement. “A lot of dairy farmers struggle to get the points they need for Glastir.

Stubble turnips will help them do that as well as improving the soil structure,” says Mr Duller. Under Glastir, the crop must be planted by 1 July but not grazed until after 15 October.

But Mr Duller warns farmers to choose the site carefully to avoid soil erosion. The condition of stock should be monitored closely and supplemented with trace elements if necessary.

The Jenkins’s bolus their cows at drying off with a slow-release trace element bolus containing iodine, selenium, copper and cobalt, to cover them for the period while they are on the crop.

In terms of dry matter intake, cows weighing 550kg need an equivalent of 2.5% of their bodyweight; a third of the diet needs to be in the form of roughage such as silage.

Farming Connect facilitator for Ceredigion and North Pembrokeshire, Menna Williams, says the trial at Pentrefelin Farm demonstrates stubble turnips are suitable for all types of livestock and systems, particularly farms with housing constraints.

“For farmers who are tight on housing, it provides a viable means of keeping cattle rather than investing in buildings.

“The question farmers have to ask themselves is do they want to build a new shed to expand or can they put the cows somewhere else.”