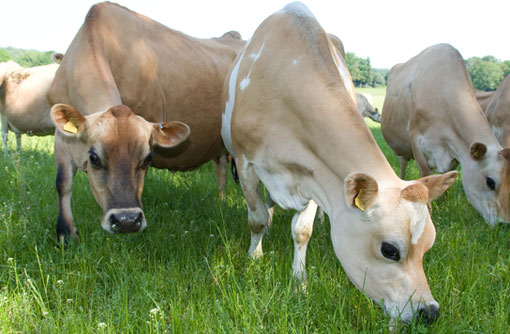 By the time a five-to-eight year grass sward is ploughed up it can contain up to 40% of non-sown species – but over-sowing can re-vitalise the sward and maintain productivity during its lifetime.

Seed specialist Tim Kerridge says grassland livestock farmers do not have to accept a reduction in dry-matter yield in established swards when they have the opportunity to manage them more effectively and bolster productivity by over-sowing. He reckons a 10% reduction in the performance of a sward can mean a 50% reduction in the milk it produces.

“By its own nature a lot of grass in the UK is under-performing. Farmers are increasingly aware of the potential to get more from grass but it has to be fully used to enable it to become more productive and more profitable,” says Mr Kerridge, agricultural sales manager of seed breeders DLF Trifolium.

“If you look at hybrid and perennial ryegrass it’s still performing reasonably in its third year, but in our trials we’ve been able to maintain higher intakes by topping up the species within the sward through over-sowing. At the point of over-sowing these swards are only performing at 50% of their potential in terms of animal output because of the inclusion of weed grasses. The natural grasses present will keep an animal alive but we need more than that for profitable production,” he says.

“If you examine the NIAB lists and look at cutting management of perennial ryegrass you will see that in year one it has a yield expectancy of around 17 tonnes a ha. But by year three that will have reduced to 14 tonnes a ha because the grass isn’t as vigorous – it’s simply wearing out.”

Mr Kerridge says the yield reduction can be up to 23% between the first and third year of the sward’s life, but without any cultivation the performance of the grass crop can be maintained simply by over-sowing to bolster and maintain yield.

“Under-performing grassland is a massive drain on profitability for UK livestock producers but if that under-performance was addressed it could achieve a dramatic improvement in animal performance and ultimately profitability. One tonne of dry matter is worth £500 a ha in terms of the value of the product produced from that land.

“If the losses tolerated in the grassland sector were mirrored in the cereal sector, growing cereals would not be viable. If there was a 10% reduction in cereal performance those crops would only break even. Grass is not consistent over its lifetime in terms of its performance and so we’ve got to look at ways of overcoming that.”

Johnny Bax, international technical manager of Biotal says improving the way cows use grass by increasing cell wall digestibility of the forage is now being addressed by plant breeders.

“Optimising rumen function is the aim. We want cows to eat more, but if they eat more they digest less so we need the rumen to slow things down.

“So how do we optimise fibre digestion? We minimise the indigestible fibre fraction and that’s down to the plant breeders.

“But it’s also about the stage and maturity of the material when it’s harvested. We want fibre but not the lignin so that we can maximise fibre digestion through improved cell wall digestibility. We have to maintain a high rumen population of fibre digesting bugs to avoid sub-acute acidotic conditions.”

Dr Bax says the rumen likes stability and needs a constant input of the same nutrients. “If we increase cell wall digestibility that’s probably preferable to having a focus on high sugar grasses where there are fluctuations through the day.

“Sugars will ferment within six hours, proteins in 12 hours and starches in 24 hours. That’s the challenge we’ve got – to balance the nutrient supply entering the rumen. Some parts of the diet need several days, other components just a few hours, so it’s the nutritionists’ trick to get all that working together.”