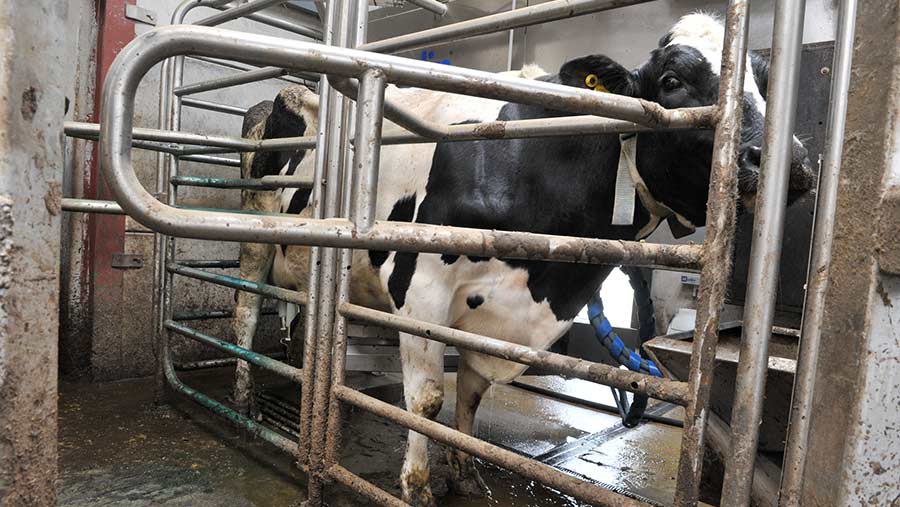 Robotic milking has helped two suckler beef producers make the step into dairy farming by easing the workload and breaking down the routine.

There was pressure on profitability due to rising production costs and returns weren’t sufficient to support both partners in full-time roles, which meant Alec working off-farm as a haulier.

See also: How a dairy farmer has integrated robots and grazing cows

A combination of factors, including Alec becoming a father and wanting to spend more time at home and a mutual aspiration to “Brexit-proof” the business, forced a rethink.

“We had been a Farming Connect Demonstration site in the past and had acquired a good grasp of cost management through that experience.

It was evident that our input costs for the beef herd were going up, but our income was static, if not going down,” says James, who is also a Farming Connect mentor.

They have chosen to spread their risk by introducing dairying into the mix, as they already play a role in managing the 120-cow Glanrhos Holstein herd, established by the father of James’ wife, Sarah.

The Cowans presented a convincing business plan to their bank manager, with support from John Crimes of CARA Wales, and secured funding to establish their dairy enterprise, reducing the suckler herd to 50 cows and the sheep flock to 450 to part-fund the setup.

Robotic milking in a housed system provided the flexibility to balance the demand their other enterprises have on their time and meant they didn’t need to employ staff.

A shed used for loose housing the beef was extended by about 10m (35ft) to create a 132-stall cubicle shed, fitted with mats and automatic scrapers from Mayo Cow Comfort. 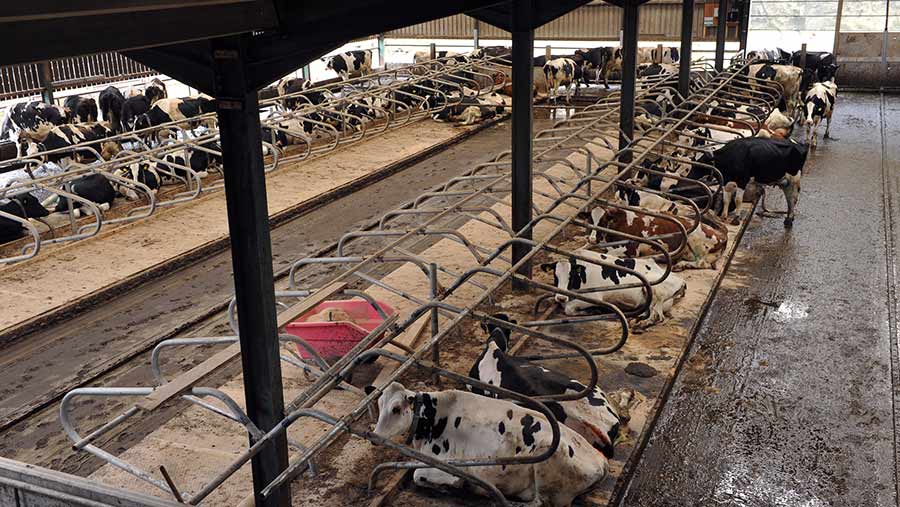 Two Fullwood milking robots were installed and other infrastructure included a 580,000gal slurry store and a 10,000l milk tank.

The herd was established with mostly Holsteins but with some crossbreds and Jerseys to boost butterfats, all sourced from high health status herds.

Milk was first produced at Blaencwmpridd in February 2019 – there are currently 90 cows milking but this will increase to 120 within 12 months.

The Cowans calculate a seven-year payback on their investment.

“Our figures factor in a fairly low milk price so we are confident we make it work,” says James.

They secured a contract to supply South Caernarfon Creameries.

“We are producing on a level profile so we didn’t struggle to get a contract.

“It was evident that wouldn’t have been the case had we been converting to spring milk,” says Alec.

The enterprise is in its infancy, but the Cowans are ambitious.

To help inform that ambition, Alec recently visited the Netherlands, funded by a Farming Connect Management Exchange Programme bursary, to study how dairy farmers in that country are reducing antibiotic usage.

As a result of that visit, Alec is now confident, with the support of his local vet, in using selective dry cow therapy (SDCT) at drying off instead of tubing with antibiotics.

The pair are already thinking ahead of the curve.

“If we can significantly reduce antibiotic use, it might help us add value to our milk,” says Alec.

The work associated with the milking enterprise, such as feeding, bedding and dealing with other issues, takes one person about three hours a day but, unlike milking, it is spread over the course of the working day.

“It fits in well with our beef and sheep work.

“At lambing time, for instance, we just had to walk across the yard from the sheep shed to get the jobs done in the dairy,” says James.

The farming enterprise consists of 280 acres of owned land and 200 acres rented on a mix of long-term agreements and summer grazing, with land rising to 1,000ft.

A zero-grazing system to feed the herd takes advantage of grass quality – grass recently analysed at 25% protein and 12.5% ME.

Cutting and feeding takes 20min/day. “That’s the same time it would take to get the cows in if we were milking conventionally,” Alec points out.

Cows are fed to yield – up to 12kg over a 24-hour period but with no cow receiving more than 3kg at one milking; cows visit the robot an average of 4.1 times during 24 hours. 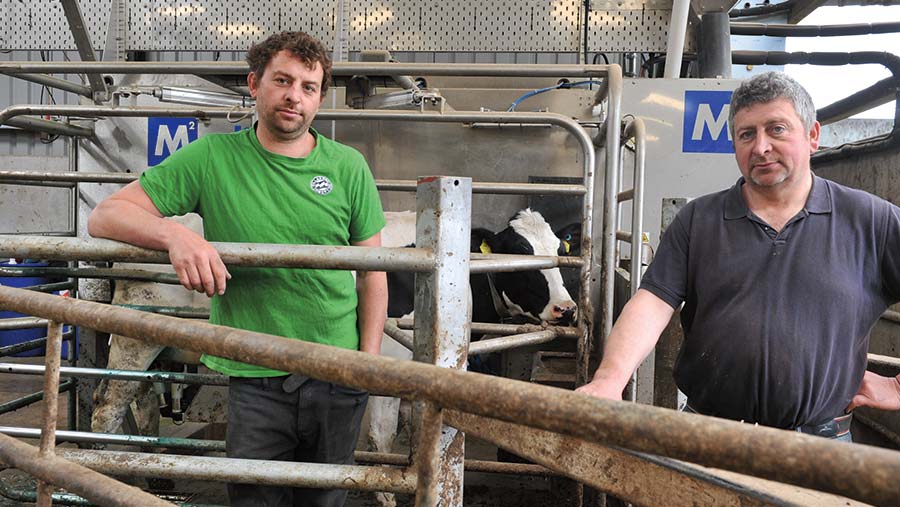 “Cows in a conventional system would struggle to eat 12kg, but robot milking means intakes can be spread over several milkings,” says James.

“We are driving for margin over concentrate, not yield,” says James.

Alec sums up the conversion as “just another day in the office’’, but admits: “It is nice not to be driving up and down the M6 several times a week.”

James, who also has a young family and once worked as a haulier too, agrees.

“It was OK before we had families, but that changes when you have children.

’’The next generation is, in part, responsible for the conversion to milk production.

“The business has got to pay for us, but there has also got to be something for the children to take over should they wish to farm one day,” says James.

“We have got more baskets but the same number of eggs.

“Our profit per hectare might not be as great as it would if we had a single enterprise when times are good, but that could also be said of losses when times a bad.”

The programme provides opportunities and up to £4,000 in funding for farmers or foresters in Wales to undertake an intensive period of knowledge exchange and development.

This can either take the form of a visit to a leading farm or forestry businesses within the EU, or through hosting a suitably trained and experienced farm or forest manager to visit the applicant’s home holding.