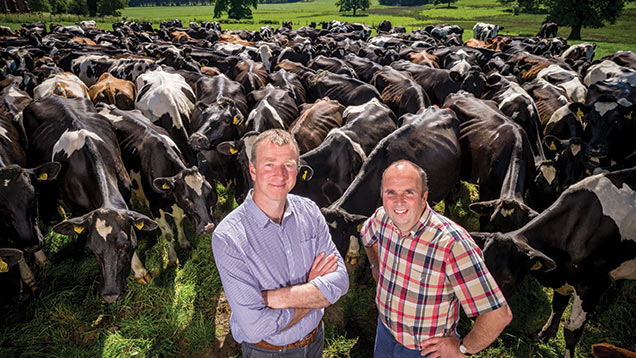 People are more important than cows and grass when running a successful dairy farming business, according to the 2014 Farmers Weekly Awards Dairy Farmer of the Year Robert Craig.

He also runs 390 spring calving cows at Cairnhead Farm in Ainstable, with one herd manager and several staff.

Mr Craig said he used to class himself as a dairy farmer, but admits he is now more of a relationship manager.

He said it was his team that made the two farming enterprises a success.

He said when running a successful team it was vital to have correct people in the roles.

“You’ve got to be realistic when managing staff.

“Some people are never going to be managers, so don’t put them in roles they are no good for. You need to ask yourself whether they are followers or leaders,” he said.

And after sourcing the correct staff, keeping communication flowing within the team is vital.

Mr Craig said he encouraged staff to engage in discussions groups, as well as feedback vital information, such as grass covers, health issues and day to day problems in weekly meetings.

He is also just about to start a job exchange between Dolphenby and Cairnhead Farm.

“Some people are never going to be managers, so don’t put them in roles they are no good for. You need to ask yourself whether they are followers or leaders.”
Robert Craig

“The job exchange will allow staff to spend time on each other’s farms and to learn from one another,” he said.

He also gives his staff responsibility and some free reign to make decisions. This, he said, keeps staff engaged and happy.

As part of staff progression the farm is funding a new member of staff to go to New Zealand for a year.

He said: “We hope to do this once a year. It is a small investment and hopefully it will help attract new blood on to the farm.”

Having a good relationship with all members in a partnership is important, added Mr Craig.

He said when selecting a partner, whether a farm owner or a business partner, it is important to like them.

He also stressed the importance of having a clear understanding of each other’s ambitions.

“You need to have a friendship with your partner and most importantly need to respect one another. It’s also important that you have the same or close to the same philosophy for the way you wish the system to run.

“Communication is also vital and Steve and I talk to each other for at least a couple of hours every week,” he added.

The last team Mr Craig said was important to engage with was the professional team.

He said it was important to keep land agents, accountants, advisers and the banks informed about everything, so they could offer the best and most accurate advice.

Find out more about this year’s Farmers Weekly Awards at www.farmersweeklyawards.co.uk