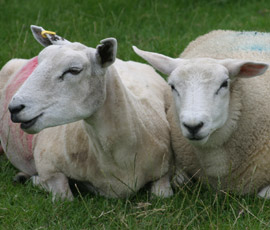 The Schmallenberg virus has been confirmed on 74 farms across the UK, according to figures released by the Animal Health and Veterinary Laboratories Agency.

The total represents an increase of 16 cases between the previous report on 21 February and the latest information released on 24 February.

The disease has also spread to further three counties across southern England with the Isle of Wight, Berkshire and Gloucestershire reporting cases for the first time.  In all 14 counties have now succumbed.

Sheep farms continue to be the hardest hit by the disease and account for 69 out of the 74 cases. The remaining five are cattle herds.

An AHVLA spokesman said that the increase was due to cases emerging as more farms entered the lambing period and discovered the telltale signs of deformed limbs, necks and heads.

However, continental Europe continues to bear the brunt of the disease.

In Germany cases are rising by the hour. Between 9am and 3pm on Friday 24 February cases confirmed by German vets rose by 30, to a total of 737 farms affected.

And in France the number of units has risen from 152 at the beginning of the week to 277.

The rise in Belgium has been slower with vets confirming cases on 144 units but authorities have warned that they have a further 496 farms where the disease is suspected and under investigation.


For more background and information go to our Schmallenberg dedicated page