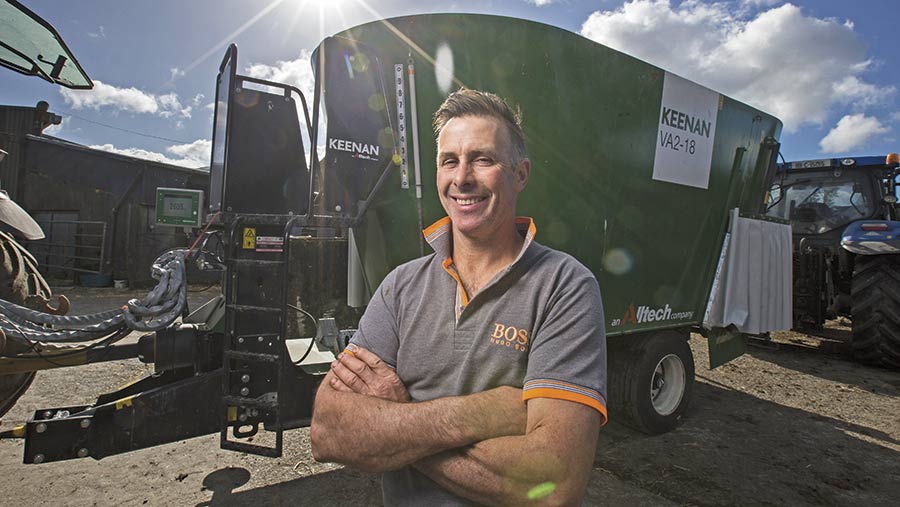 Most spring calving dairy farmers would grimace at the thought of buying a feeder wagon.

However, some are spring systems are doing just that in an attempt to extend grazing rotations and support milk production.

A high stocking rate is another reason why some pasture-based herds are supplementing grass with total mixed ration (TMR), while others are favouring feeding TMR to balance the variability in the dry matter, protein and availability of grass.

In County Cork, dairy farm Kevin O’Neill has invested €40,000 (£34,800) in a Keenan tub feeder wagon to allow him to feed TMR to extend the grazing window on his 32ha platform. 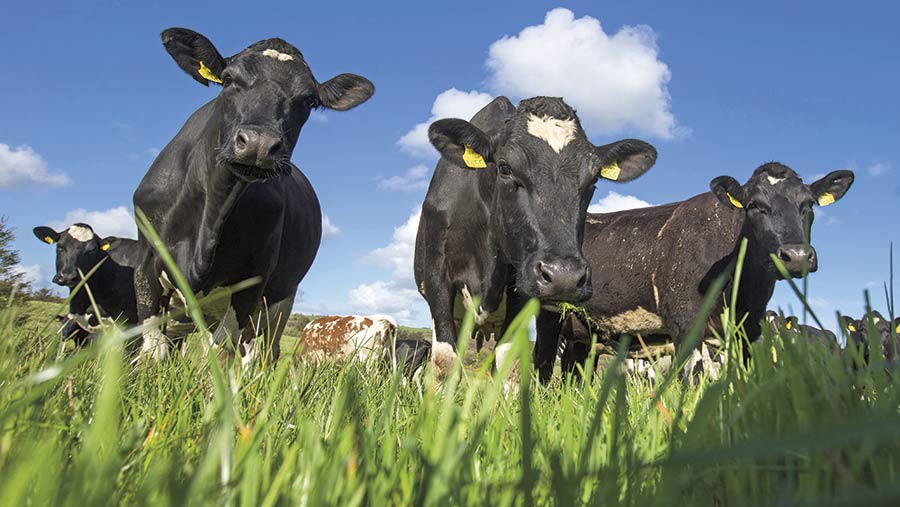 He milks 140 spring calving cows on a pasture-based system at Ahakeera, Dunmanway. Half the farm has free-draining red sandstone land, but the remainder is reclaimed marsh which can be difficult to graze.

“We can grow grass but we cannot get at all the paddocks,” says Mr O’Neill.

When conditions are wet in the autumn and spring, the number of paddocks cows can graze is limited and that’s where buffer feeding comes in.

He aims to turn cows out to grass on 1 February and doesn’t house them until 1 December or later if conditions are favourable.

On the shoulders of the season, when grass growth is low, cows receive a ration of 30kg freshweight a head made up of grass silage, straw, soya bean, maize meal, barley and sugar beet.

This reduces to 8-10kg as grass growth increases and then once housed this mix is upped to 60kg a cow. Cows are buffer-fed in feed bunkers in the yard before the afternoon milking.

“We fetch them in 10 minutes early, it helps speed up the process of getting them in from the field but it can make them a bit lazy going into the parlour,” says Mr O’Neill, who farms 81ha. 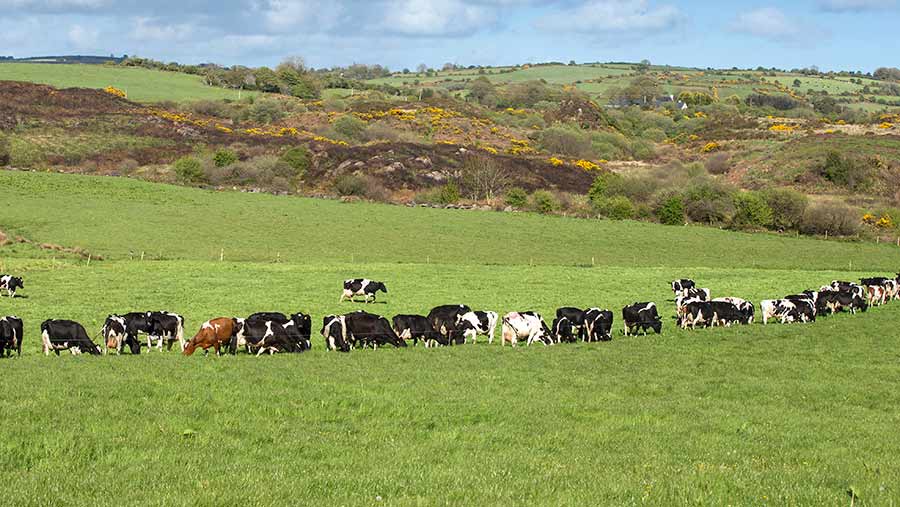 “We feed until the grass is plentiful, usually around mid-May, and introduce a buffer again at the end of September or beginning of October,” he adds.

“As soon as I think grass is tapering off in September or October I start using buffer feeding but I don’t want to open the pit silage so I use bales instead,” he explains.

Cows receive 2-3kg of concentrates in the parlour in the autumn and 1kg in the spring.

“Milk solids come at a price, I wouldn’t use TMR if it wasn’t returning a premium for me, although other spring calvers think I am an idiot for having a feeder wagon.”

In a poor spring, buffer feeding has been very beneficial, he points out.

“During a cold spring like the one we have just had, those farmers might only have their cows at grass for three hours then they had to bring them back inside to feed.

“I know of grazing farmers who would have been feeding about 10kg of meal at that time whereas I only fed 7kg because the cows were getting a buffer feed.” 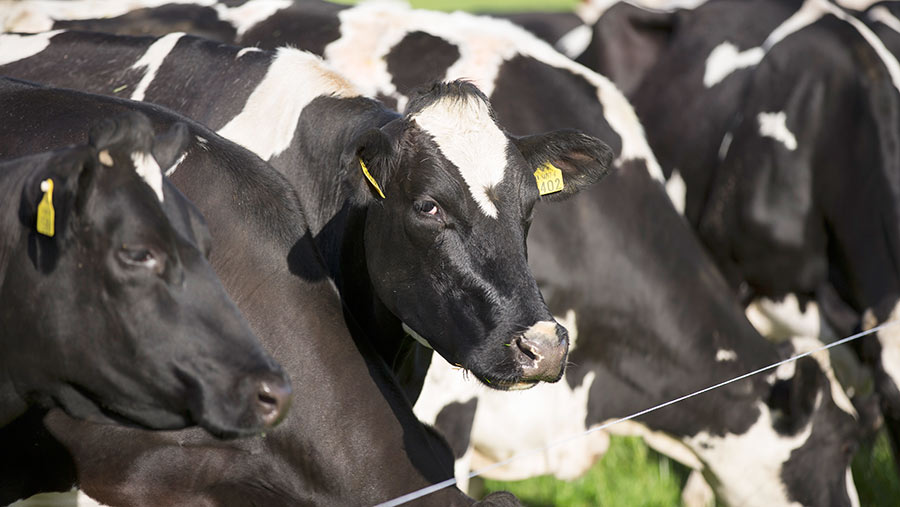 His cows are larger than the more typical spring-calving animal – he milks pedigree Holstein Friesians, but these are moderate in stature and width.

He has three-day paddocks, allocating grazing with an electric fence.

“I never have to top a field, I get short, leafy grass, not long and stemmy.

“I don’t get any waste; the fields are like a golf course when the cows have left them.”

“I would rather be looking at it than looking for it. I mow grass every day so I know if the covers are getting too heavy and when they are I cut them for silage.”

He applies 30-35kg/ha of nitrogen to paddocks after every grazing. “When the grass is growing I fertilise as heavily at the nitrate regulations allow and cut what I don’t need for grazing for silage.”

Mr O’Neill takes three cuts of silage – both clamp and big bales – with the first cut mostly in mid-May.

He believes buffer feeding underpins the health status of his herd.

“During this spring’s calving we only had one case of retained cleansings and no displaced abomasums.

“In an extreme spring grazing situation, the cows go out to grass and they are empty, their stomachs will move.

“If I think my cows are loose I can add straw to the ration or a little bit of soya to help with digestion so that they are chewing their cud.”

A balanced diet has also resulted in very few cases of lameness. “We never have to cull for lameness even though they have to walk up to a mile to and from the parlour,” Mr O’Neill reports.

And he says fertility is good too – his submission rate in the first three weeks of breeding is 45%. “We have very few empty cows,” he says.

He has a strict culling policy – removing between 10-15 animals from the herd every year, mostly due to poor udder structure and if they have experienced more than two cases of mastitis.

Mr O’Neill regards the wagon as a cost neutral investment. “Whatever it is costing me it is certainly returning.”