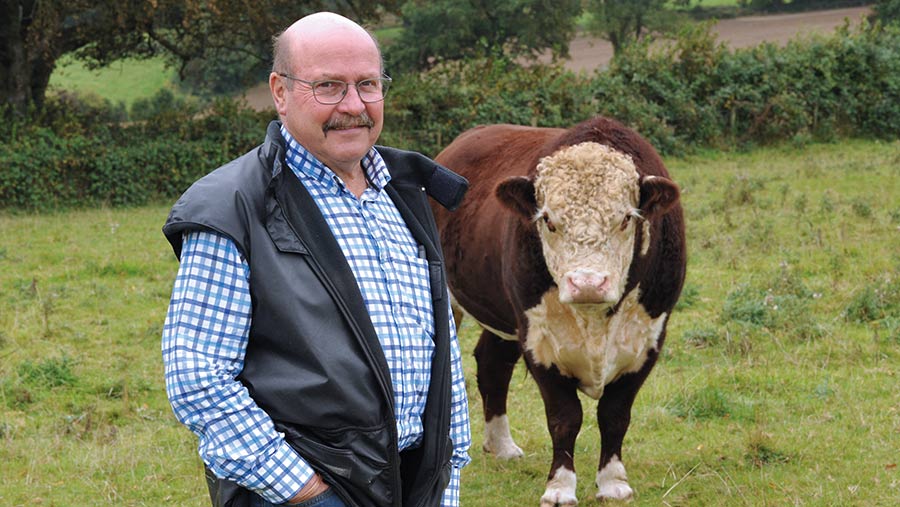 Breeding bulls to “sweep up” after AI is giving a large-scale dairy farm control over herd biosecurity.

The Harris family farm in a high-risk TB region, so a priority is to reduce the risk of transmitting infectious disease into the three herds, run on an organic system.

“We like the cattle to have local immunity, to be able to resist diseases that bought-in animals are more likely to succumb to,” says Laurence Harris, who farms with his wife, Eira, and son and daughter-in-law, Tom and Francisca, in Pembrokeshire, where they also run the Daioni milk company.

The business has 20 homebred sweeper bulls – an equal number of young and older animals. These run with the autumn-calving herd of 380 Holstein Friesian grazing-type cows at Ffosyficer, near Abercych.

The Harrises have spring-calving herds at two other farms but because of TB biosecurity measures Jersey bulls are used instead of the homebred bulls.

How the sweeper herd was established

The family have used the Hereford as a sweeper bull for nearly 20 years.

Mr Harris was keen to establish a small beef herd to produce stock bulls to breed with his dairy cows, so he bought six in-calf heifers from Michael Clark, a renowned Hereford breeder and owner of the Lowesmoor herd in Tetbury, Gloucestershire.

The Harrises’ Teifiside herd now has 10 suckler cows which are sired to Hereford stock bulls sourced from pedigree herds to produce the sweeper bulls.

One of the reasons Mr Harris favours the Hereford over other beef breeds is calving ease.

“Easy calving is a must. Very few need assistance,’’ he says.

With so many bulls on the farm, docility is another prerequisite. “The Hereford is a very quiet breed – too quiet sometimes, as it can be difficult to get them to move when there are routine jobs to be done,” Mr Harris jokes.

A new bloodline is introduced into the pedigree herd every two years with the purchase of a bull.

When it comes to selecting bulls, Mr Harris admits he is becoming more discerning. “It is no longer the case that it just needs a white face.”

The stock bulls he has mated with the purebred Hereford herd have included Lowesmoor Colossus. “He has really put his stamp on the herd,’’ he says.

“We have also bought four young bulls from the Tydesmoor Herd in Derby, which are a bit shorter in the leg, and we bought an in-calf cow from Aled Jones at Caersws and kept the resulting bull calf for breeding.’’

There are many practical reasons for his enduring devotion to the Hereford breed while others, he admits, are more aesthetic: “They are very pleasant to look at.”

Bull size is a consideration, so the sweepers are used for only four years. Bigger bulls are removed from the herd to avoid damaging cows while serving on concrete.

“We don’t use them for longer than four years because they can get to quite a size,’’ Mr Harris explains.

Because the cows are housed at breeding, the bulls must have good feet, he adds. 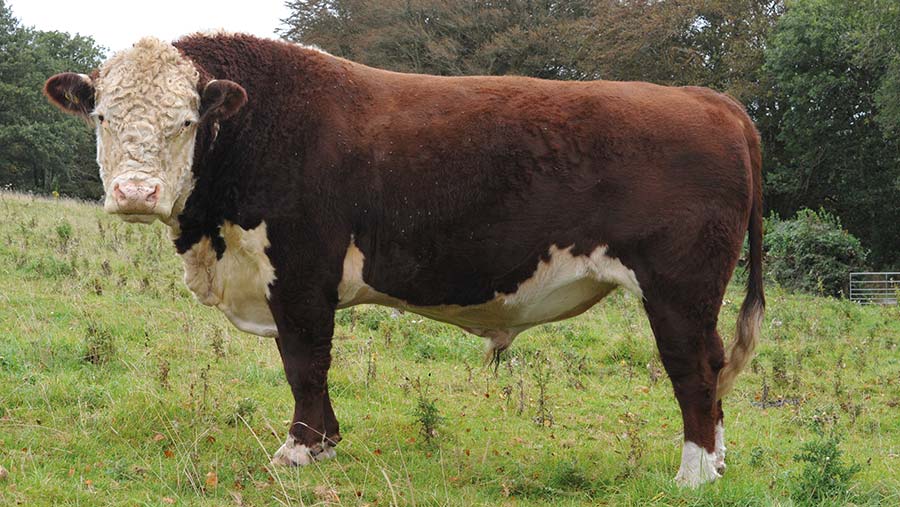 “We run them on concrete for at least six weeks before breeding, to harden their feet.’’

The bulls are not fertility tested but are rotated with different groups of cows to safeguard against any issues with the fertility of an individual bull.

Tom Harris explains: “We rotate the bulls in 12-hour shifts to give them a rest and to keep them keen.”

How the sweeper bulls work

At Ffosyficer, the sweeper bulls are introduced in the second week of January, to pick up any cows that are not in calf.

This is seven weeks after the start of the breeding period, after cows have had two rounds of AI to a dairy bull.

The herd calves over 12 weeks, from September to December.

Currently 80% calve in the first seven weeks. Laurence Harris hopes to shorten the calving period by focusing on gestation length in the beef bulls.

“There is a lull of around 10 days between the last day of dairy calves being born and the first day of beef bulls arriving and this slows down the calving period,” he explains.

The business finishes all the beef crossbred calves produced by the sweeper bulls – about 120-140 a year.

The autumn-born crossbreds are turned out to grass at six months and graze on stubble turnips in their second winter.

“They can stand being out on stubble turnips and straw in the winter. They outwinter well,” Mr Harris says. “They are also easy to manage which is key, given the number of stock we have.”

Beef animals graze on old leys that cannot be used in the farm’s arable rotation. These areas are mostly under environmental schemes that protect the old meadows.

Some fatten in their second grazing summer and will be fed grain in July to get them off farm as early as possible. The average finishing age is 22 months.

All the crossbred beef cattle are sold by March, mostly to St Merryn Meats to supply Tesco, and receive an organic premium. Some are sold to a local butcher, Tom Samways, who has a shop in Cardigan.

Getting the finishing period right is important. “The Hereford can go over-fat if you are not careful. You have to keep an eye on when they get to the right stage and sell them then,” says Mr Harris.