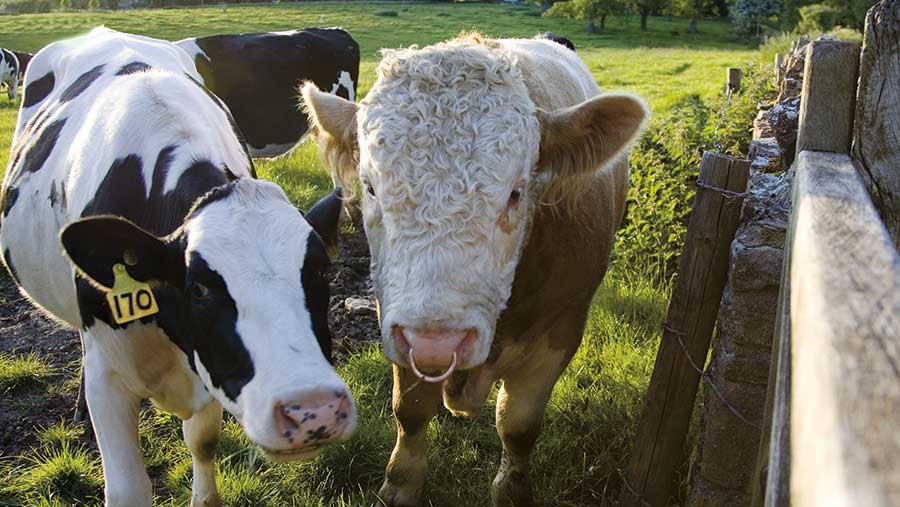 As the breeding season in spring block calving systems approaches, dairy farmers will be weighing up the pros and cons of running vasectomised bulls with their herds to improve heat detection.

A vasectomised bull undergoes a surgical procedure to cut and seal the tube that transports semen from the testicles to the penis, rendering the bull infertile.

Unlike castration, whereby the testicles are removed, this means he can still produce testosterone and will be able to detect heat as well as any stock bull.

Otherwise known as a teaser bull, a vasectomised bull can be a useful aid on dairy farms where staffing levels and heat detection are sub-optimal, according to Carmarthenshire vet David Staak.

Improved heat detection is an immediate benefit to reproductive efficiency.

“The teaser bull will help improve submission rates by identifying cows in heat and marking them with paint from a paint ball strapped to his chin,” explains Mr Staak, of Market Hall Vets, St Clears.

Below, Mr Staak answers some important questions for farmers wishing to use a teaser bull.

What is the recommended ratio of bull to females?

In block calving herds, you should run two bulls with every 100 non-pregnant cows.

In a year-round calving herd, where a proportion of the herd is already in calf, one bull for every 100 cows is acceptable.

Bulls can become tired if they are in larger groups of cows and this will reduce their libido.

If a bull shows signs of tiredness, resting him for 4-5 days will overcome this.

My preference is for Aberdeen Angus cross bulls because these can be hardier than other breeds, have a relatively small frame and also have a good libido.

Dairy-bred bulls, such as Holstein Friesians and Jerseys, also perform well but their more aggressive temperament is a consideration.

What is the optimum age for surgery?

Bulls should be vasectomised when they are still quite young, ideally at 6-9 months of age. The cost of a vasectomy can range from £80 to £110.

I advise vasectomising young virgin bulls to prevent the spread of venereal diseases.

Farmers should wait at least 6-8 weeks after surgery before using a bull. This is to allow the bull to recover properly but also to ensure he doesn’t get any cows in-calf, as viable sperm can live upstream beyond the surgery site for almost two months in animals that have reached puberty.

Should health status be a key consideration?

A bull with an unknown health status or vaccination history could introduce disease into a herd and the negative consequences of this can far outweigh the benefits.

Therefore, bulls should be quarantined and tested for infectious disease and an MOT should be carried out.

Using a homebred bull can eliminate the cost of buying one and reduce the risk of introducing infectious and venereal diseases to your herd.

When should a teaser bull be introduced to the herd and when should it be removed?

Once bulls have been vasectomised they can be used from about 12-14 months of age, when they are about two-thirds the height of the dairy cows.

I suggest running teaser bulls with a group of pregnant milking cows for a few days before they start working.

This will help them get used to being around cows and to being on concrete surfaces.

Bulls should “start work” around three weeks before artificial insemination is due to begin – at this point all cows should be cycling.

Teaser bulls also work well towards the end of the breeding season, when the number of pregnant cows increases and the level of heat activity eases off.

After bulls have been introduced, rotate them every three weeks during the breeding season until the point where AI is stopped or a sweeper bull is introduced.

What marker system should I use?

The most popular method of heat detection is a chin paint ball. This is a collar which contains paint and marks any mounted cows.

The device should be fitted at least two weeks before the bull is used, to allow him time to adjust to the aid.

However, initially the bull will attempt to mount many cows so leave the marker off for the first 48 hours or you will pick up cows that aren’t in heat.

Paint should be topped up daily in block calving herds as there is mostly sufficient paint in the device to mark only 14-20 cows – overlooking this job this is one of the most common reasons for failures in the system. It is also a good opportunity to check for sores around the harness.

Once the marker has been fitted and there are signs that a cow has been mounted, it is mostly a clear indication that she is at the ideal stage for inseminating.

Can a vasectomised bull be used for more than one season? And what if it becomes injured?

Ideally, vasectomised bulls should be used for only a single breeding season because young bulls become more difficult to handle and older bulls put on weight when they are sharing the milking cow ration.

Older bulls are also more discreet when it comes to mounting cows.

There will be a lot less paint markings on bulling cows.

Young bulls will mount bulling cows numerous times and splash paint all over the cow’s rump, back, head and withers, making it much easier for the herdsman to spot cows in heat.

If the bull becomes injured or lame his libido will be affected, in which case remove him from the herd and rest him.

How can teaser bulls improve submission rates and what are the other benefits?

The presence of the bull means less time needs to be spent on heat detection, and it also helps to work out the timing of AI.

The presence of these bulls also increases the intensity of oestrus activity in females, reducing reliance on vet intervention with hormones.

Teaser bulls have been proven to improve submission rates, but other factors affecting fertility, such as staff skills, staff routines, cow health and nutrition, and housing must not be overlooked.