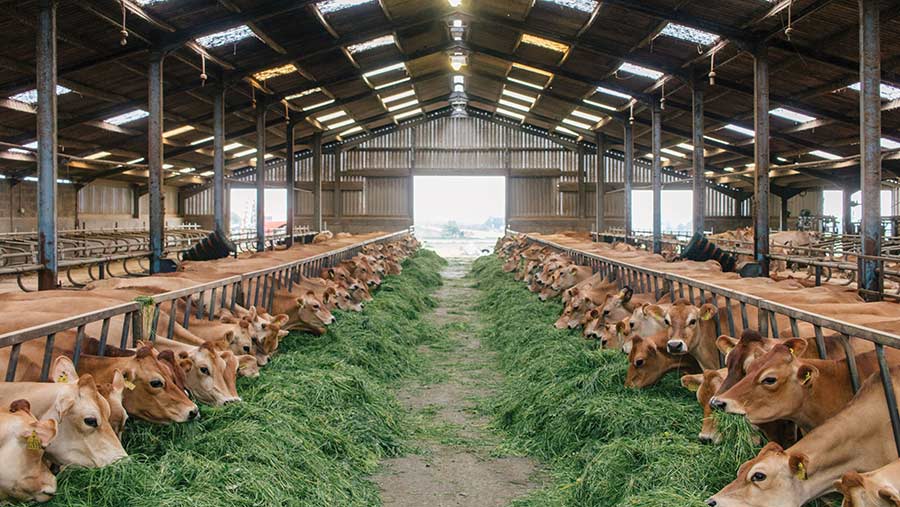 A switch from milking Holstein cows to Jerseys is providing a Scottish dairy producer with a more stable milk price and a predicted better bottom line, while also allowing the farm to make improved use of the infrastructure.

Colin Murdoch, from Buntonhill Farm, Kilmarnock, was approached by Graham’s Family Dairy after an opening became available to become one of only 14 Jersey milk producers supplying the processor.

At the time, he was milking 170 Holstein cows and supplying Graham’s on a conventional liquid contract. After going through the figures, and with advice from his nutritionist, Bryn Davies from Advanced Nutrition, he decided to make the switch. 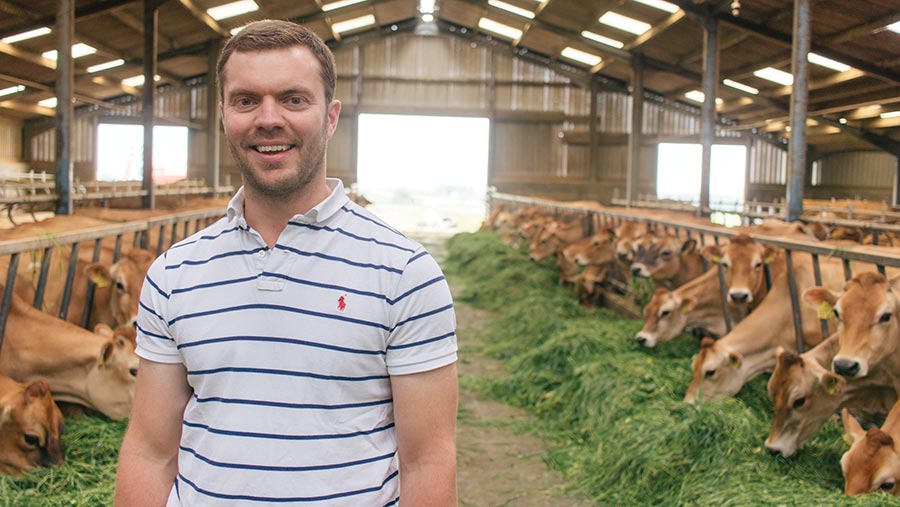 “The main driver for me was to get away from conventional milk,” says Mr Murdoch.

“We were feeding a 10,000-litre cow and raising them in an environment that naturally held them back. The West Coast of Scotland is not a dry area and, in my opinion, grazing pure Holsteins on this farm is not sustainable.”

Holstein cows had been zero-grazed from 2014, but as breeding led to a cow with a bigger stature, the 1980s cubicle sheds were starting to creak as the beds weren’t quite long enough to provide them with optimum comfort.

“The Holstein was also becoming more fragile, and fertility and lameness were issues. I didn’t want them outside grazing because of the climate, yet keeping them on concrete 24/7 in a facility that was good, but not quite right for them, was not ideal.”

The Holstein cows were mostly sold privately to farms in Cheshire and North Wales, averaging £1,250 a head, and just one month later, in October 2019, Mr Murdoch welcomed his first 150 Jersey heifers. These were imported from Denmark, with a further 60 heifers imported since.

“We bought the Jerseys through Owen Daley of Best of Breeds Livestock. He took us out to Denmark where we met with Viking Genetics. The national herd health and quality in Denmark is light years ahead of where we are.

“The cows over there are very uniform and their health status is a lot better. We didn’t want to risk buying-in TB,” he explains.

Most of the cows were in-calf to sexed semen and cost £1,600 a head, on average.

“Importing the Jerseys did cost quite a bit of money, but we bought heifers at their peak value with the hope to get at least four to five lactations out of them,” he says.

Some small tweaks had to be made to the system to accommodate Jerseys. They included:

The nutrition has also been adapted.

Jerseys are fed a total mixed ration (TMR) in the morning, comprising 5kg of concentrates and 20kg of silage, and 45kg of fresh-weight grass in the afternoon.

As well as being more cost-effective to feed, Mr Murdoch says the Jerseys are also easier to manage because the whole herd is fed one diet instead of two.

“We used to feed a high- and low-yielding diet to the Holsteins, but now we are able to feed one TMR throughout the year. We just adjust the amount they are being fed, with freshly calved cows receiving more cake in the parlour and the cows close to drying off get less.

“We do this for simplicity, as well as the fact you can lose too much off the backend of a lactation when you change from a high- to a low-yielding diet.”

Zero grazing has remained the same, with fresh grass introduced in February/March and fed until November. Mr Murdoch says the aim is to achieve about 200 “grazing” days, which would be at least two months longer than if they were outside grazing.

“We also don’t lose any quality in the grass and the fields are cleaner. Cows also do not lose any condition. It works well for us, although it is machinery intensive,” he adds.

Mr Murdoch now plans to expand the herd from 200 to about 240 cows, with the aim to be calving 20-30 cows a month all year round to maintain a level milk profile.

The plan is to use genomics to breed replacements and sell surplus in-calf heifers.

Although it is still early days, Mr Murdoch is hopeful the Jerseys will be more profitable. Predictions estimate the margin over purchased feed for the Jerseys to be twice that of the Holsteins, at £1,209 compared with £522, due to the better milk price and lower feed rate.

“When it comes to lameness out of the whole herd, I have only had to put blocks on three cows, yet in the Holsteins I could be putting on two to three blocks a month.”

Mr Murdoch is positive about his future in dairy and says the arrival of the Jerseys has renewed enthusiasm within the team.

“They are a delight to work with. I’m really glad we made the move when we did. Had we still been on a conventional milk contract we might have been struggling when Covid struck. On our contract now we lost 1p/litre for a couple of months before it went back up again.”