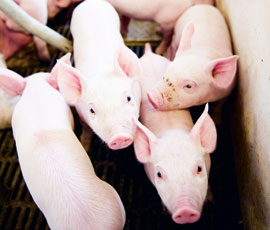 The Danish pig industry has pledged to cut exports of piglets in a bid to boost Denmark’s economic growth and increase pig production in the country.

Producers, processors and the food industry vowed to increase slaughter pig production in Denmark by two million over the next two years, helping bring an extra DKK3bn (£323m) to the country’s economy and providing 3,000 more jobs.

Signing the ‘Herning Declaration’ during the Pig Congress in Herning, Denmark, this week (23 October), the industry said it wanted to increase efficiencies and help reduce risk for producers by seeing them take more control of the production chain.

“We have the answer to economic growth for Denmark,” said Nicolaj Norgaard, director of the Pig Research Centre.

“We are exporting wiener pigs in the 2,000s because it was the most economic way to invest in the workforce.

“Now we can produce more with less environmental emissions because of advances in technology and feed conversion rates are higher in new barns.”

Mr Norgaard said the industry wanted the government to recognise the potential of pig producers to help the country grow, but warned the government needed to provide support so producers could invest in barns to accommodate more pigs.

“It’s difficult for farmers to get capital for investment,” he added. “We need support for new investment and we need the government to provide the right environment which ensures a premium to build new finishing buildings and prevents extra costs to our production.”

Mr Norgaard said the whole pig sector was aware that continuing to export production and failure to invest would cause the country’s influence in the global pig market to fall.

“We have an interest in having a strong sector,” he added. “Danish thinking is co-operative and we want to own the value chain and reduce risk for our producers.

“Owning as much of the production chain as we can will help efficiencies and transaction costs, which will result in better costs and better ways.”

Increasing slaughter pig production would also help the country increase its export market to lucrative emerging economies such as China, he added.

Denmark currently exports a container of pork products to the Chinese market every hour, seven days a week.

Exports of pigmeat to China could match the current value of piglet exports to Germany, which currently stand at about DKK2.4bn (£26m) to the industry, he added.