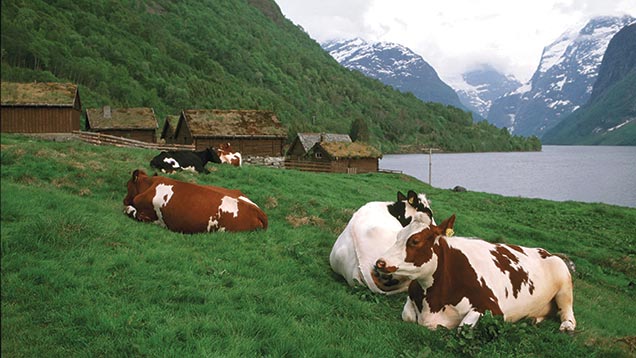 An all-encompassing dairy industry database, a strong breeding programme and an industry that supports national health initiatives have led Norway to its world-leading position in animal health.

And the high health status of their cattle means producers face minimal mastitis, metabolic or fertility problems and their related costs.

Norway has had disease problems in the past, but Tormod Mørk, from the Norwegian Veterinary Institute, acknowledges that eradication programmes for TB, Brucellosis, BVD and Johne’s have been very effective.

An eradication programme for TB across Nordic countries saw the disease virtually disappear by 1963. BVD has been a more recent problem with about 25% of Norwegian cattle infected in 1986.

“It became very clear that losses to BVD were very high and the cost to the industry in 1992, when an industry eradication programme was launched, was estimated to be £4.2m,” adds Mr Mørk.

The programme involved testing, identifying PI animals and culling. BVD was added to the list of notifiable diseases and movement restrictions for farms with positive animals were imposed.

In 1994, nearly one-third of Norway’s herds had movement restrictions but this dropped rapidly and the final restriction was lifted in 2006.

“The cost of BVD eradication from 1992-2006 was £5.24m. This was shared by the government, industry and in part by producers who had to slaughter PI animals and double fence their units.

“Now 10-12% of bulk milk samples are randomly Elisa tested for BVD. There are no BVD vaccination programmes on Norwegian dairy farms which could lead to false readings.

“Johne’s disease was also quite prevalent but testing and culling reduced incidences markedly, and since 1996 we have had 10 reported cases. We still have a surveillance programme in place,” he says.

Geno – the farmer co-operative that progeny tests 110 elite Norwegian Red sires a year – has increasingly weighted its breeding programme in favour of health and fertility traits in the past 40 years.

“We now have breeding goals that are 43% in favour of health and fertility, 28% for production, 23% for functional type traits and 6% for growth rate,” says Geno global director Tor Arne Sletmoen.

“This has been highly successful. Better fertility and less disease have played their part in milk yield increases to the current national average of 8,000kg at 4.2% fat and 3.4% protein.

“Management and data recording has played a part in these improvements too,” adds Mr Sletmoen.

The introduction of a national health card scheme boosted health and fertility management in 1990.

For the past 25 years, each dairy farm has been legally obliged to record all health issues and any treatments must be signed by the vet. This information has been fed into the national database and used in the breeding programme.

“Its introduction coincided with a number of health initiatives, an increased weighting towards health and fertility in breeding goals and a dramatic reduction in antibiotic use in the dairy industry; a spin-off from consumer reaction to bad press surrounding excessive use of antibiotics in the salmon industry. In fact most antibiotics in herds were for mastitis and much of this was deemed unnecessary,” says Mr Sletmoen.

“We have seen improvements in cattle health and a dramatic reduction in vet treatments in Norwegian dairy herds from 1.4 a cow a year in 1990 to 0.5 a cow a year. Half of this is attributed to the health and fertility breeding goals.”

Vet treatments on Norway’s dairy farms are typically for mastitis, retained placenta, milk fever or ketosis, but the rates are very low. Very little dry cow therapy is carried out in Norway.

“Our producers now recognise that although the milk cheque is important, the cost of production is equally significant with health and fertility on farm having a big impact on efficient dairying through better yields, easier cows and improved cow longevity,” he adds.