A radical plan to tackle bovine TB will see England divided into three risk areas, as DEFRA ramps up the battle against the disease.

In what amounts to a comprehensive tranche of measures aimed at curtailing and eventually eliminating the disease, DEFRA proposals will see the country divided into high-risk, low-risk and edge areas – each with their own anti-TB strategy.


The ultimate aim is to secure official TB-free status – a process which the government itself acknowledges could take up to 25 years in the high-risk areas of south-west England and the West Midlands, where bovine TB is endemic.The strategy focuses on keeping the designated low-risk area free from bovine TB, halting and then reversing the spread of the disease at the edge of the high-risk area and radically reducing the prevalence of bovine TB within the high-risk area (see map in Risk-based area approach tab).


Compensation levels will be slashed for individual farmers if complacent biosecurity is deemed to be the cause for their herds going down with the disease. At the same time, the government says it will reward best practice in livestock farming.


Voluntary risk-based trading of livestock will see the bovine TB history of herds available at the point of sale, the production of buyer and seller best-practice guidance and the possibility of a bovine TB risk rating for every herd in the country.


Badger culling will be rolled out to more areas if pilot culls are deemed successful this summer. The strategy places particular emphasis on addressing the reservoir of bovine TB in badgers alongside conventional cattle-based measures.


The proposals are contained in a DEFRA consultation launched on Thursday (4 July). Speaking to Farmers Weekly, farm minister David Heath said: “We need to have a strategy that gets us to the point of official TB-free status for the country. We believe it is achievable.”


Official TB-free status takes its meaning from European law. For an area to be considered to have TB-free status, at least 99.9% of the herds within it must have remained free from bovine TB for at least six consecutive years.


That represents a major challenge in south-west England. In Devon, Cornwall and Gloucestershire, less than 5% of dairy herds with 50 or more cattle have remained TB-free since 1990, according to figures published by the BovineTB.info website following a freedom of information request.


Local badger vaccination initiatives will be encouraged in the designated edge area. The government said it will continue to invest in the development and licensing of bovine TB vaccines for both cattle and badgers, but these remained some way off.


The consultation can be found online.

The government’s proposed strategy to combat bovine TB splits the country into three areas: a low-risk area, a high-risk area and an edge area.


Each area has its own sub-strategy and objectives that support the strategy’s overarching aim – achieving official bovine TB-free (OTF) status for England.


The low-risk area extends across the North and East of England. The prevalence of bTB is very low, with most cases linked to animals being introduced from higher-risk herds. Breakdowns tend to be relatively short and there is not a recognised reservoir of the disease in wildlife.


The objective is to continue to protect the low-risk area from the spread of the disease, immediately deal with any isolated outbreaks and obtain OTF status as soon as possible.


The edge area covers the boundary of the high- and low-risk areas. It marks the area where infection is spreading outward from the high-risk area. The objective of the edge area strategy is to focus effort on containing the spread of bovine TB and then reversing it to achieve OTF status.


This will involve cattle measures to control the disease. Research will help determine the role of badgers in spreading bovine TB in the edge area. Results of this research will inform future evidence-based action, says the government.


The high-risk area is concentrated in the south west, West Midlands and East Sussex. Bovine TB is endemic, with a relatively high proportion of herds experiencing breakdowns, including repeat breakdowns, and a reservoir of infection in badgers.


The objective of the high-risk area strategy is to halt and then reverse the increasing prevalence of bovine TB by addressing the disease in cattle and in badgers, and ultimately to achieve OTF status. The government says this could take up to 25 years. 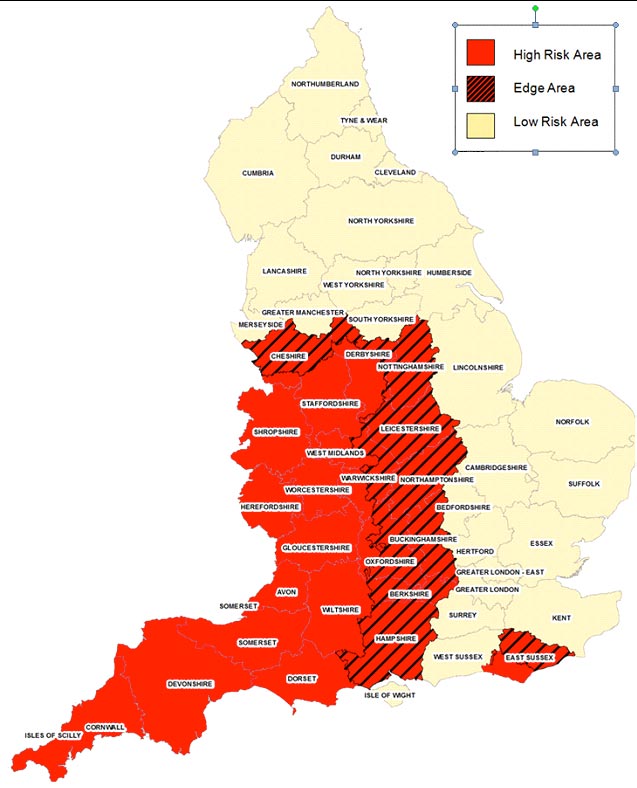 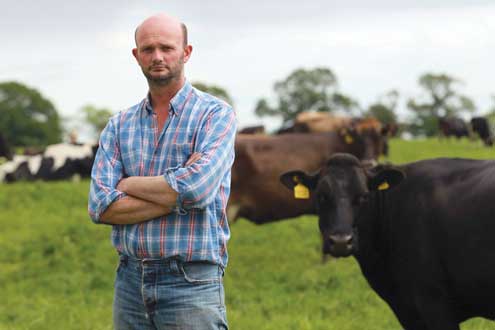 “I welcome the opening statement about putting TB in its rightful place as our number one animal health problem – but I am fairly dismayed by the way the document is framed. It clearly states that government is responsible for policy – yet that policy has failed to deliver for 20 years or more.


“Now the cost of policy failure is to be passed back to farmers due to government budgetary pressure. This is simply a disgrace and while I understand that government has financial pressures, it piloted this course and now it wants to share the responsibility for the consequent crash.


“I am happy to partner government, but only if I get a fair say in what policy is. I am therefore dismayed beyond belief that badger control is not a preferred option in the edge area.


“I run a closed herd and I am convinced that badgers are a local problem. I cannot prove it because government hasn’t done any research to show the prevalence of TB in wildlife, which it now proposes to do.


“I feel extreme disappointment that my closed herd has been exposed to such a devastating disease challenge, with 89 cows lost. The problem for commercial herds is huge, with TB draining cash, labour and confidence out of the system.


“Ultimately the failure of the past 20 years has been that for budgetary reasons and to save political capital DEFRA has not implemented a successful control policy. Now they aim to regain control with less resource, but only by passing the buck for their failure to farmers.

The government’s planned bovine TB strategy will not unfairly pass the cost of fighting the disease to farmers, says farm minister David Heath. Watch the video below.