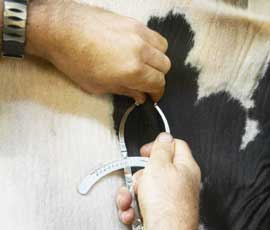 DEFRA has announced a range of measures to help stop the spread of bovine tuberculosis.

The measures target farms on the edge of the worst affected areas.

A DEFRA statement said: “Bovine TB is endemic in major parts of the south west, and there is growing concern about the spread of disease northwards and eastwards into counties within the “edge area”.”

Introduction of the measures will begin in October 2013. All farms in the edge area are already on compulsory yearly TB testing, and compulsory testing before the movement of any cattle from their farm.

DEFRA added: “Analysis suggests that, if left unchecked, TB could spread beyond the edge area to places such as Greater Manchester, Lincolnshire, Merseyside and West Yorkshire by 2022.”

“Stamping out infection in areas where the disease was spreading would benefit farmers and livestock businesses by an estimated £27m over 10 years.”

The measures were announced by farm minister David Heath on 12 August.
“We are taking tough and decisive action on TB at the frontier of this disease to stop and then reverse the spread,” Mr Heath said. “The measures we are introducing this year will help protect vast areas of England from the scourge of TB and take a significant step towards our goal of eradicating TB within 25 years.”

Chairman of the Animal Health and Welfare Board for England, Michael Seals, added that action had to be taken to prevent more farmers being condemned to the fate of dairy and beef herds in the south and west of England who lived in fear of the disease.

“The edge area measures are necessarily tough but will provide significant savings to farmers over the next decade as we can contain and push back the frontier of TB,” he said.