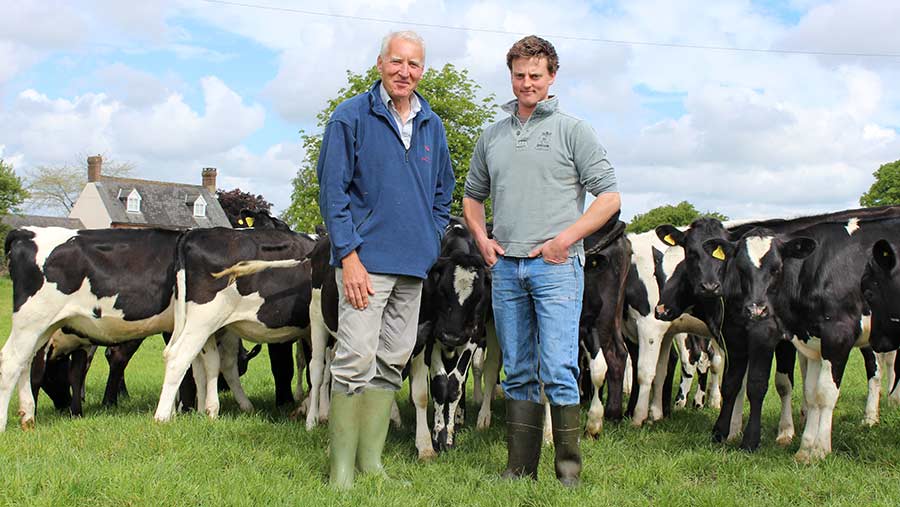 It takes a brave man to sell more than a century’s worth of pedigree Holstein breeding, let alone put his faith in a 21-year-old to completely overhaul the family farm, but Guy Trehane has done just that.

Heading up the day-to-day farm management is young farmer George Winstone, who has driven the change in system type and is now two years into a 10-year contract farming agreement with Mr Trehane.

Although Mr Trehane admits that selling generations of Holstein breeding was the hardest decision of his life, he is the first to recognise the business had to adapt to survive. With none of his children wanting to actively farm, he was also open to a joint venture.

He explains: “I’d been thinking about succession for some time. I wanted to keep my options open and keep farming.

“I’d been looking for partners to do a joint venture with to keep the farm in the family and keep me actively farming, which is important for inheritance tax.”

The crunch year came in 2013, when the farm lost one-third of the Holstein herd to TB.

At the time, milk prices were also dropping, while Mr Trehane was also conscious of his age.

Concerns over global markets and peaks and troughs in milk price and feed inputs also made him question his high-input system.

back then, cows were receiving almost 3t concentrate each a year, with the labour associated with feeding a complex TMR also adding to overall costs.

He explains: “It was profitable as long as the milk price was 32p/litre. I really questioned the sustainability of what we were doing. We were just pushing the cows too hard and having serious metabolic issues and problems getting them back in-calf. The vet bills were enormous. Cows weren’t looking happy and we were chasing our tails.”

Mr Trehane considered various joint-venture partners, although none seemed the “right fit” until meeting Mr Winstone, who was coming to the end of his Reading University degree.

At the time, Mr Winstone was considering becoming a farm consultant while working on his family’s 440-cow dairy unit in Somerset.

However, after meeting to discuss the joint venture, Mr Winstone decided to take on a full-time farm manager role at Hempreston Manor Farm for six months to establish if “the chemistry” worked between the pair and whether a joint venture might work.

He used that time to establish where changes could be made. His conclusion was to simplify and shift to an autumn block-calving system.

This would work well with the farm building and grass set up, and mean cows were dry in late summer, when the farm tends to dry out. It would also fit the available cream milk contract with Blackmore Vale.

The Holsteins were sold in the same month and, over the next three months, 300 Irish Friesians and Friesian crosses were purchased. In September, the first cows calved and milking began.

With the existing seven aside herringbone parlour located among the cow sheds, a new, simple 20 aside parlour was put in an existing grain store to aid cow flow and handle higher numbers.

The major changes were focused around simplifying the feeding system. The mixer wagon was sold and silage clamps adjusted for a self-feed system, while cubicles were installed in the feed passages.

Grazing infrastructure was also overhauled. Water troughs, fencing and tracks have gradually been put in with the existing block of grass, split into 3.4ha paddocks.

About 36ha of arable land has also been reseeded with a dual purpose mix of intermediate and late-heading perennial ryegrasses and clover. In total, the grazing platform covers 59ha of the 182ha farm.

Cows now calve outside on standing hay from August and are then rotationally grazed on 12-hour breaks. They will then be housed at night from mid-September and full-time from late-November and fed self-feed grass and maize silage with a flat rate of 5kg/day each of cake through the parlour until May.

Mr Trehane says the new feeding system has slashed costs, not only in terms of bought-in feed, but also the staff time needed to feed out.

“Seeing the wagon and Manitou going up the road was the best thing I’d seen in a while. We’re now running the farm with one tractor and a quad bike and use contractors for maize drilling, silage making and slurry spreading,” he says.

When it comes to breeding, cows are currently served to dairy semen for four weeks, with scratch cards used for heat detection.

British Friesian will be used on the majority, with Kiwi-cross used on bigger cows. Aberdeen Angus sweeper bulls will then be used.

Mr Winstone says the main challenge has been buying in cows that proved not to fit the block, which has meant it will take a minimum of two years to meet their seven-to-eight-week target calving window

“We’ll tighten the block by ensuring we’ve got plenty of heifers coming through so we can afford to cull anything outside our calving window,” he explains. This will be achieved by synchronising heifers to front load the block.

Mr Winstone has great confidence in the sustainability of the system, which is reflected in the fact the business made a profit even during the challenging milk price year of 2016.

“We’re paying back capital on investment and still managed to return some good figures in year one, despite a poor milk price. We believe we can produce milk in the low 20s [pence per litre], however it’s too early to tell. We budget a cost of production of 25p/litre,” he says.

His plan is to return home to the family farm in the next few years and find the right candidate to take over the day-to-day management of the unit at Hampreston Farm for him.

Mr Trehane is also convinced the complete system shake-up has been worthwhile.

“Effectively, I’ve got rid of my Ferraris and bought twice as many Skodas, which give much less milk, have much less cost, a minimum amount of stress and hardly any vet bills at all.”