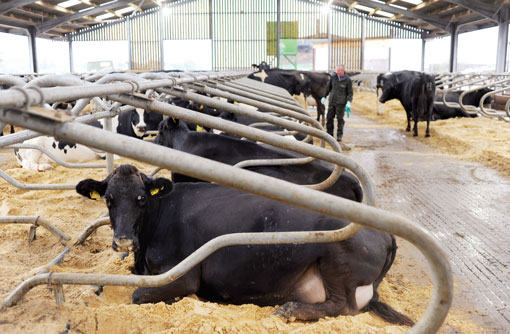 The basic principles of dry cow management may be the same regardless of system, but all-year-round and block calving herds can face varying management challenges, Aly Balsom compares the two.

The 360 Norwegian and Swedish Red cross Holsteins in-milk yield an average 7,000 litres a cow/year, with 50% of milk produced from forage.

Cows are put out to grass in early April until the end of September and calve outside during a 16-week block starting on 1 August.

Cows start to be dried off from June, according to their calving date and milk yield, with cows dry for 60 days. Anything giving less than 12 litres a day gets dried off earlier in May. Body condition score is rarely a reason for drying off.

“We dry off on one day a week. Any cows due to go dry will be pulled out during milking and then run back through the parlour after it has been cleaned,” explains Mr Dutton.

Teats will be cleaned with a medicated wipe, with cows double tubed with antibiotic and sealant.

“We used to select low cell count cows to just receive a teat sealant, but we found it didn’t work as well on our system,” he says. “We tended to get mastitis or high SCC the following year.”

Part of drying off protocol ensures the person drying off continues to hold onto the teat between tubing, with the sealant applied immediately after the antibiotic. This reduces contamination risk.

After being dried off, cows move onto post-silage ground and are stocked at about one cow an acre.

“These are fields the milkers haven’t been on. It’s important to go onto clean fields to reduce the risk of mastitis infection,” says Mr Dutton. “Because grass growth is also reducing at this time of year, it’s ideal for dry cows.”

This year it has been unnecessary to buffer feed dry cows, but in a normal year they will have access to hay or straw.

Two weeks prior to calving, stock are moved into a calving paddock close to the buildings. They then receive 1kg of dry cow rolls with minerals and adlib hay. Magnesium is also put in the water troughs to prevent milk fever.

“Having a separate concrete feed pad is important for mastitis control when calving outside,” comments Mr Dutton.

Everything is calved outside up until November, with about 8% of the herd then calving inside on a straw yard.

When calving outside, calves remains on the cow for 12-24 hours. Fresh calvers are then brought inside and any of more than four lactations will receive a magnesium bolus to prevent milk fever.

Cows then move into the milking herd and are put on the milking ration of 60% maize silage, 40% grass and 2kg rape. They also receive 7kg of concentrate in the parlour.

The main challenges on their block calving system

“Because we have so many calving at once, one of the main challenges is keeping fields clean and mastitis free,” says Mr Dutton.

35% of total mastitis cases in the last 12 months originated in the dry period. As a result they may create more calving paddocks and rotate between them, and address fly management.

However, he believes because cows aren’t under as much production pressure they are much easier to manage during the dry period compared to high yielding Holsteins. They have only had one DA this year and no ketosis.

• Avoid over feeding during the far off dry period

• Focus on managing clean pastures when calving outside.

THE ALL YEAR ROUND CALVING HERD

D Goodwin and Sons run a high input, high output system, with the herd of 650 pedigree Holsteins milked three times a day and producing just under 11,000 litres a cow a year.

The herd at Hill House Farm, Haywards Heath in West Sussex, is housed all year round with about 55 cows calving a month to achieve a flat profile.

On the current system, cows are dry for an average 47 days. However, the aim is to increase this to about 51-52 days.

“Cows are usually dried off on a Wednesday morning when nothing else is happening,” he says. Because milking cows receive one ration, anyth cow giving less than 15 litres will be dried off, regardless of stage of lactation to avoid getting fat cows.

Cows are brought onto a clean milking platform, stripped, teats cleaned with antibacterial wipes and an antibiotic tube and sealant applied.

“Some cows that have had double figure SCC throughout lactation and no mastitis just get a teat sealant,” says Mr Goodwin.

The type of antibiotic given also varies depending on SCC and mastitis history to ensure responsible and effective use.

The farm has recently started feeding two different rations during the dry period in response to 25% of cows developing endometritis post-calving.

Now the far-off dries are on DECAB silage and straw and then move into the transitional group a minimum of 25 days pre-calving, where they receive grass silage, brewers grains, straw, cereal and soya rape.

“By feeding two rations we hope we will see less problems with fat cows,” explains Mr Goodwin. “The ration has already had a huge impact. We’ve had one displaced abomasum in the last five months and a four week rolling average of less than 8% endometritis.”

The farm also produces a specific low potash grass silage for dry cows to prevent milk fever with magnesium flakes and dry cow minerals provided in the transitional diet. Milk fever incidence is about one every three months.

Cows are housed throughout the dry period, with the close to calving group on deep bed sand cubicles. Dry cows are also run through a footbath every week to prevent digital dermatitis.

The farm adopts “just in time” calving with cows moved from the transition yard into calving pens when the water bag is showing. “If you move cows too early, it can delay calving,” explains Mr Goodwin.

After calving cows receive warm water and propylene glycol and the milking ration. Cows then move into the fresh cow group for about 15-18 days where they are milked twice daily and housed on sand cubicles. Regular temperature, vaginal and rumen checks are carried out.

The main challenges on their all year round calving system

“At the moment our dry system is quite stress free,” says Mr Goodwin. “The main thing is to pick up the correct cows to dry off. If there’s a drop in milk, she needs to be dried off quickly to stop the cycle of fat cows.”

• Dry off in a clean environment and use the right protocols

• Target the use of different antibiotics at drying off.

“Getting fertility right is crucial on block calving systems. If you get cows that have slipped out of the block, it can become a headache managing these as dry cows.

“Ideally all cows should have calved before you start breeding. It’s also important to get on top of mastitis and lameness. If you don’t and you have to cull for these reasons, it can be difficult to cull those that have slipped out of your block due to fertility.

“With a lot of block calvers calving outside, it’s also important you have non-contaminated pasture and think of it as a bedding to reduce mastitis risk. Create some kind of paddock rotation to help udder health and nutritional balance.”

All year round calving:

“Because facilities are being used for 12 months of the year, they need to thoroughly and easily cleaned to promote good udder health.

“Ensure there is enough space to cater for the busiest calving times and if space is under pressure, it’s better to steal it from elsewhere so you don’t compromise the dry cows.

“Nutritional management is also important, particularly for those that have extended calving intervals as these tend to be fat. A single ration for the dry period can increase the risk of putting on condition. A low energy far-off ration gives fat cows time to re-set their system and breaks the cycle of putting weight on.”