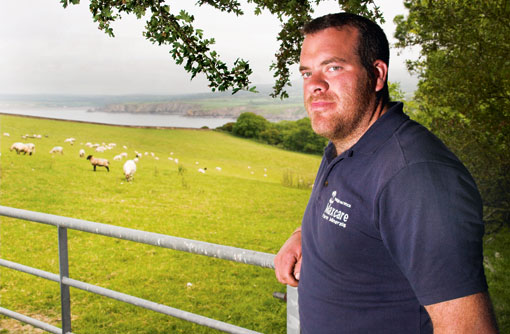 Tricky weather this season has prompted some changes at Dinas Island Farm on the Pembrokeshire coast.

Neil Perkins has taken the decision to wean the remaining 2,100 lambs from this year’s crop earlier than normal, at 12 weeks, due to challenging grazing conditions.

Minimal rainfall coupled with shallow soil on this coastal farm has put pressure on the pasture so the lambs were moved to a 60-acre clover-rich block inland.

By weaning the lambs early, on 4 July, the ewes could remain at Dinas Island where they have been run on tight blocks of pasture. This, says Mr Perkins, has been an ideal situation for drying off ewes.

“Moving ewes and lambs close to weaning would have been very stressful on the flock because the lambs get separated from their mothers. It takes a couple of days for the animals to re-mother and as we were so close to weaning we decided to do it early,” he explains.

“Some farmers would prefer to keep the lambs on the ewes for as long as possible but the lambs have been getting plenty of energy and protein from our clover leys 18 miles away at Croesgoch and are doing really well.”

The soil on this land is deeper and better at retaining moisture. It also received more rainfall than at Dinas Island this season.

“The little rain that has fallen in Pembrokeshire this summer has missed the north coast; we see it fall on the mountain before it reaches us. We have only had a couple of decent days’ rain since March. It has been a very difficult mid-season,” says Mr Perkins, who farms in partnership with his father, Roger, and wife, Lynda.

At weaning, all 1,600 ewes and 2,100 lambs were given trace element boluses for the first time. The soil at Dinas Island Farm is high in molybdemum which locks up vital trace elements. The main issue arising from this was poor lamb growth.

Until this year the Perkins’ have used purpose-made lick buckets to counter the problem but were concerned that not all of the flock had been using the buckets.

“The buckets were brilliant but I would guess that 30% of the stock were not getting what they needed. It tended to be the more forward sheep, those that perhaps had less need, that were using them. There was also an issue with the buckets blowing around the fields and into hedges making the place a bit untidy,” says Mr Perkins.

“We were also getting patches of dead grass around the buckets where the sheep were gathering so we were damaging areas of our swards.”

He has spent £4,000 on supplementing the ewes and lambs with slow-release Tracesure boluses and also plans to bolus the ewes pre-lambing to benefit the lambs when they are in the womb and through the ewe’s milk once they are born.

“There is no question of us not using a trace element product and our feeling with the boluses is that every animal can be guaranteed a dose. If it works it should give us more lambs per ewe and slightly bigger lambs at birth so we should also be able to sell more lambs before weaning.”

At the same time the animals were bolused the lambs were also wormed and given a clostridial vaccine. The ewes were also given their annual “MOT” with feet, udder, tags and teeth checked.

The cull animals were drafted from the flock and sold at an average of £45 a head, although some of the top animals achieved £84.

This will pay two-thirds the cost of a replacement ewe lamb, which Mr Perkins says is a reasonable figure compared to previous years.

The lambs are graded every two weeks after weaning. The first post-weaning grading has totalled 220 lambs.

The Perkins’ keep the best 600 ewes as breeding stock and the remaining 1,000 go to terminal sires to maintain an easy breeding system. Two-thirds of the flock are now Lleyns.

The flock was created from a nucleus of 300 performance-recorded ewe lambs and yearlings and the breeding policy will eventually create an entire flock of Lleyns.

The first mob of lambs, which were pure Lleyn, was sold to Pembrokeshire Quality Livestock in June. All achieved classifications within the EUROP payment grid but were a bit light in weight.

“The Lleyn ticks all the boxes for us but the pure wether lambs finish at lighter weights, and can go to fat quickly if not sold,” says Mr Perkins.

He was challenged on his lamb weights by farmers at a recent open day on the farm but he has the figures to back-up this breeding policy. He can get a higher stocking rate with Lleyns and produce more kilograms of meat an acre.

By stocking six ewes an acre, sold at a deadweight average of 17kg, 153kg of lamb is produced per acre. If sold at £4/kg this generates an income of £612/acre.

If Mr Perkins bred a bigger ewe he could only run five to the acre because of their higher feed requirement. At an average carcass weight of 19kg this would produce 142.5kg of lamb per acre. At £4/kg the income would be £570 an acre.

“Even if the lambs are slightly lighter we are getting £42 an acre more from pure Lleyn lambs,” says Mr Perkins.

But the Perkins’ hope to improve on the finish weight with the offspring of the terminal sires they have used. They are not focused on achieving the top grades; instead they are buying terminal sires for carcass size with a slightly leaner finish.

“With the terminal sire we are using a leaner ram, Rissington Primera, which is a New Zealand composite breed that gives really good weights,” says Mr Perkins.

He predicts the returns will be even higher from the offspring of the terminal sire rams. “We will get 171kg of lamb an acre which, if we have a 19kg carcass sold at £4/kg, will give us a return of £684 an acre. That’s £114 an acre more than we would get from a larger ewe.” This, he says, is the justification of using Lleyns.

At turnout, the ewes were dosed with a long-acting cydectin to counter a high Strongyle worm burden. “The intention of this is that the ewes act like a Hoover for eight weeks, taking the eggs off the grass and removing the worm burden,” Mr Perkins explains.

“It was quite a cost but having a worm burden in the lambs is more costly. We still had to administer an early dose to the lambs to combat nematodirus but no further drenches were needed till weaning.”

Faecal egg counts are carried out every two to three weeks and the worm eggs can be easily identified. Regular FEC testing has enabled the farm to cut back on worming and it also helps to build up a picture of worm issues on the farm from year to year.

The early spring meant all the silage was harvested by the beginning of June, the first time this has happened. Although Mr Perkins was pleased to get the silage off early and in good conditions, he says the weather has been difficult for grass production.

The growth was so intense at the start of the season that he struggled to keep on top of it and cutting silage swards early was the only way to maintain quality. A benefit of taking silage early is that grazing has been spread across all the fields, as he has all the winter feed needed.

With very little rainfall in the last four months, grass has been stressed and thrown seed heads early and the fields have had to be topped for the first time since the Perkins’ changed their grazing technique three years ago.

The toppings have not been wasted – the ewes have eaten it all – but it has lacked the feed quality of leafy grass. “There is still energy in the growing swards and protein from the clover but it has been going to head and there is less leaf for the stock to eat,” says Mr Perkins.

He has applied the same level of fertiliser as in previous years – 75kg/acre of Humber phase-release ammonium sulphate in March and another 75kg at the beginning of June.

The heifers he rears on contract for a dairy farmer have been grazing grass that has got too strong for the sheep.

“The Italian leys have been growing constantly since we cut the silage. We have been moving cattle around to give them the length of grass they need. It is a bit of a logistical nightmare but the plate meter guides us on whether we have the 6-8cm the cattle need.”

Although the weather has made farming a challenge, it has brought holidaymakers to the campsite at Dinas Island Farm and to the holiday cottages at their nearby Hendre Farm.

This business is run independently of the farm, but if any of Neil and Lynda’s children wants to farm, the two businesses can run alongside each other to support three generations.