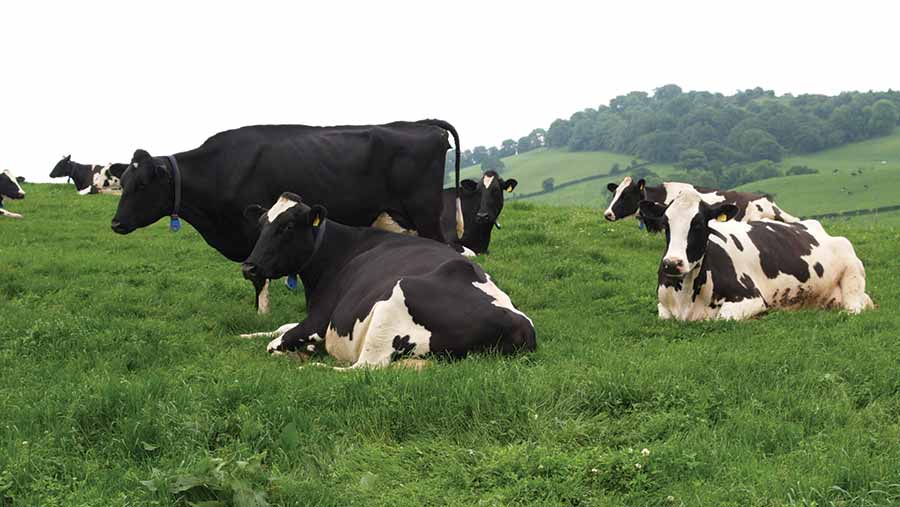 He first started using the index in 2005 after becoming increasingly concerned about his cows’ infertility.

Previously, he used Holstein genetics from Holland and the US and selected bulls on their type, but since switching to selecting black and white bulls based on their EBI, he says he hasn’t looked back.

He selects bulls for high milk protein and fertility because his contract with Aurivo is weighted towards protein rather than fat.

“I want a cow that is going to produce milk solids from grass and be fertile,” Mr Kelly told farmers at Ireland Genetic’s conference in Tewkesbury, Gloucestershire.

“We had pretty good fertility last year. I served 340 in three weeks and 63% of the cows calved in the first three weeks.”

Mr Kelly uses tailpaints to visually detect heats and serves everything to AI from 15 May. For the first three weeks he uses Friesian bulls and then beef semen is used in the last three weeks.

What is the economic breeding index?

EBI is a single-figure profit index aimed at helping farmers identify the most profitable bulls and cows for breeding dairy herd replacements.

“You can end up with too many heifers, so we are using more beef. Key for me is a short gestation length and easy calving,” he added.

Cows are paddock-grazed outdoors from February to November and grass measurements are taken weekly and recorded on Agrinet. At housing they are fed silage.

Huge gains have also been made in production. In 2006, milk output stood at 5,500 litres a cow a year at 4.03% butterfat and 3.51% protein. While Mr Kelly says he hasn’t been chasing yields, big gains have been made in milk quality.

Yield has increased slightly to 5,800 litres, but butterfat and protein has improved to 4.4% and 3.7%, respectively. More importantly, says Mr Kelly, milk solids have increased from 416kg to 470kg.

“It was never part of my plan to breed bulls for AI. It is just a consequence of profitable milk production.

“The EBI is delivering for me and it is underpinning my farm profitability.”