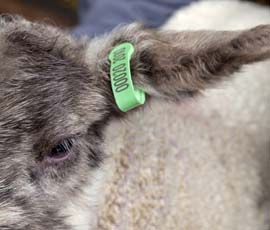 Wales is to invest in its own sheep EID reporting system to safeguard its strong lamb export market.

The electronic system will be specifically tailored for Wales and the Welsh Government says it will deliver an efficient system of tracing sheep, reducing bureaucracy and providing opportunities to improve profitability.

Wales is the biggest exporter of lamb in the EU and the investment highlights the value of that market to the Welsh economy.

Deputy minister for agriculture, Alun Davies, described Welsh lamb as one of the biggest success stories in Welsh agriculture.

“I have decided to make a significant investment in a bespoke database for Wales and this underlines how important Welsh Lamb is to the economy of Wales,’’ he said.

“By delivering a more efficient system to trace our lamb we can continue to guarantee its provenance and quality, which will in turn secure more sales and increased prices.’’

“This is a critically important issue and the industry should have been properly consulted regarding the matter and given information regarding what introducing a database would really mean for sheep keepers. Yet we have been provided with virtually no information,’’ he said.

Mr Morgan said a number of questions needed answering such as the cost implications to farmers and the practicalities of sharing data between separate databases. The system would need to work in harmony with other UK databases.

Work is currently underway on finalising the requirements of the new system but the Welsh Government said it would work with the farming industry to ensure that it suits both government and farmers.

The system will need to work in harmony with other UK databases.

“Part of the work to be done will involve looking carefully at all the benefits that a Welsh system can provide, including reassessing whether the current slaughter derogation remains appropriate alongside a central sheep database,’’ added Mr Davies.

Join the debate on EID on our forums