At Ermine Farms’ 730-sow farrow-to-finishing business in Lindsey, the use of electronic feeders has seen the farm reduce feed costs by a considerable £821 during lactation.

“It used to take nearly four hours a day for feeding and now it only takes us half an hour to complete checks, so it is saving three hours a day.

“All you have to do is look at your computer and go check the ones that haven’t fed.”

Feed saving has been significant and by measuring feed waste they found sows in conventional crates fed by hand wasted about 7kg in a 28-day period compared with pigs fed through the automated feeders.

Mr Gilliot believes sows are not wasting feed because they are in control of how much they eat and are able to dispense feed to suit their appetite.

As a result he estimates the electronic feeder is generating a significant saving of £821.50 during the lactation period throughout the year (see table above). “It is quite frightening really,” he admits.

On top of this, piglets in the system have weighed on average 1kg more compared with those suckling hand-fed sows.

“Sows are not being dictated when they can eat by people. They can eat when they want,” says Mr Gilliot (below), who believes this is helping to boost milk supply. 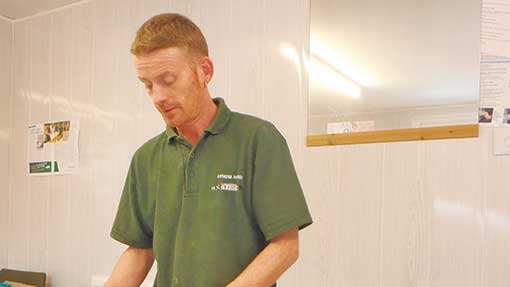 It is also helping the farm to better target body condition scores of 3 -3.5 on exit of the lactation period, because daily feed intake is monitored on the computer and a traffic light system enables farmworkers to adjust feed curves accordingly.

Mr Gilliot says it allows staff to take decisive action sooner. “You can increase or decrease feed straight away and you can see if you have a poorly sow because feed intakes will have dropped across two consecutive feeds.”

Herd consumption can also acts as a precursor for early disease.

“Feeding in lactation is probably the most important – and the most difficult – thing to execute in the sows’ cycle,” explains BPEX knowledge transfer manager Angela Cliff.

“We really want the sow to maintain her body condition. If she looses a lot of weight it becomes difficult to get a good performance in the next breeding cycle.”

But Ms Cliff describes it as a “battle” for the sow to eat enough to retain condition while feeding her piglets.

“The objective during lactation is to get as much feed as possible into them to maintain body condition and achieve high weaning weights.

“If you’re giving sows their feed in small allocations it is going to be fresher when they get it, which in itself helps improve appetite,” she explains.

Through observing feeding patterns it was also found lactating sows ate less at night. “It is interesting, because dry sows prefer to eat during the night,” says Ms Cliff.

Mr Gilliot directed feed intakes accordingly, with sows receiving 30% of their allowance in the morning and 20% in the evening.

But he believes labour saving costs would help pay for the system in the long term.