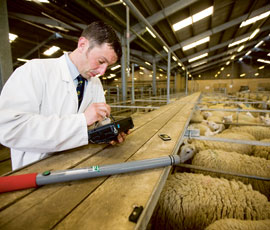 Electronic identification (EID) rules for sheep may have been in place for close to 18 months but there is still widespread confusion.

It is partly being fuelled by the continued resistance of a hardcore of sheep producers to embrace the new regulations. There is also an assumption that it’s the job of auction marts and abattoirs to “sort out” tagging issues of slaughter sheep.

The end of March sees a 10-day visit to the UK by EU officials, who will be making spot checks on farms, abattoirs and auction marts to assess progress on UK sheep farming’s implementation of the phasing-in of compulsory EID. Industry leaders say it is a visit that could trigger much stricter policing of new electronic tagging rules if the UK appears to be adopting a complacent attitude

Chris Dodds, executive secretary of the Livestock Auctioneers Association, says the EID system is in a “real muddle” and the lack of understanding is currently being exacerbated by large batches of prime hoggets presented at auction marts by feeders who expect mart staff to “sort out” the tagging issues.

“There just isn’t the manpower at markets to do this and it’s causing massive problems with big batches of feeders’ sheep,” says Mr Dodds. “Official figures show that a third of all sheep sold at a prime market don’t go direct to the abattoir. That figure surprises a lot of farmers but it highlights the importance of electronic slaughter tags and it’s this issue that anyone selling prime sheep through an auction mart needs to appreciate.”

While acknowledging the cost issue among those reluctant to switch to electronic slaughter tags, Mr Dodds says many buyers of store sheep are already making it clear that animals carrying electronic tags will be their preferred choice of purchase over those without.

“Auction marts are under no obligation to manually identify non-EID sheep presented for a prime sale in a mixed batch. A declaration should be provided by the vendor but electronic slaughter tags must be the way forward as the most responsible approach to supplying animals into the food chain.

“The best piece of advice for all sheep producers is to talk to your auction mart and discuss how you can both best make these regulations work for all concerned,” says Mr Dodds.

Geoff Lawn, a north Yorkshire farmer and chairman of the National Sheep Association‘s (NSA) northern region, says he is worried that unless the system is made to work, farmers will face penalties.

“A lot of farmers are confused but I’m concerned that unless there’s a consolidated effort to do the best job we can, we could see cross-compliance rules applied – that may mean single farm payments are put at risk,” he says. “We must all make an effort to get this to work.”

Auctioneer Keith Davies, of Welshpool Livestock Sales, says there is still confusion at markets “week on week” about how slaughter sheep need to be identified.

“Farmers admit they are unsure how sheep should be tagged and how to maintain movement records and are resistant to the extra costs involved. But electronic slaughter tags are the most straightforward option to get things sorted out and make marketing prime sheep so much easier and more efficient,” says Mr Davies.

Welshpool market is currently handling about 5000 prime hoggets a week and is still manually sorting lambs for vendors with mixed batches.

“It’s a huge job and ties up staff from 7am until 1pm every sale day – just reading tags. But there are signs that more vendors are recognising the value of electronic slaughter tags.

The flow of mixed messages given to sheep producers over the past year hasn’t helped them adapt to the new rules, according to St Merryn Meat’s livestock director, John Dracup.

“There’s a lack of understanding because the precise requirements of the regulations have been glossed over and diluted by those who have lobbied against EID. Compulsory EID is where we’re heading and we have to accept that and find the best way of making it work,” says Mr Dracup.

But he’s encouraged by the increase in the number of slaughter sheep now carrying electronic slaughter tags. “Systems are evolving within our company that will enable us to use EID to the best advantage and provide individual carcase data for our customers.”

And NSA chairman Jonathan Barber believes flock owners are becoming more familiar with the requirements of EID – although concedes they remain dubious about justifying its cost.

“The right tags and the right readers can make a big difference to the efficiency of keeping correct flock records and sheep movements and I think we’re starting to see more joined-up thinking on how this can bring management advantages,” he says.

Q. Do sheep being sent for slaughter that are under a year old need EID tags?

A. No. There’s no requirement for animals being sent for slaughter within 12 months of age to be electronically identified. They must have at least a single conventional (non-electronic) tag that shows the flock mark. But sheep producers should recognise there are often worthwhile commercial reasons why it may be sensible for these sheep to carry an electronic tag. DEFRA recommends producers communicate and discuss tagging issues with their auction mart, abattoir or private purchaser of their sheep.

Q. Is there anything to be gained by EID tagging all sheep, whether for breeding or finishing?

Q. What are the disadvantages opting for EID tagging? Does the producer then have to identify all flock numbers of sheep moved on and off the holding?

A. If all sheep in a flock are EID tagged, the producer needs to individually record movements of animals when they are sold or change ownership. As the majority of such movements are expected to take place through approved Central Point Recording Centres (CPRCs), the individual recording can be carried out by the CPRC on behalf of the owner. There’s no real disadvantage to using electronic slaughter tags – other than the slightly increased cost – as these sheep continue to be recorded on a batch basis.

Q. If stores are being sold for finishing, is the vendor reducing the saleability of the meat by not having the sheep EID tagged?

A. The saleability of the meat isn’t affected, although some buyers and abattoirs may prefer to purchase electronically identified sheep because of the greater flexibility afforded to them when they are upgraded to full EID or if it facilitates their batch within batch record-keeping obligations.

Q. What happens if identification rules are not adhered to?

A. The sheep EID rules are part of the cross-compliance regime so there is a risk a sheep producer’s single farm payment may be affected if he has not complied with the requirements.

• When the sheep’s tags are read at the market or abattoir, the sheep producer is given a receipt listing the tag numbers. This must be retained – with the copy of the movement document – with the holding register

• From 1 January 2011, animals individually identified after 31 December 2009 must include their individual ID numbers on the movement document as well as in the Holding Register off and on movements sections

• Exceptions where movements can continue to be batch recorded are a) animals intended for slaughter within 12 months of age (ie identified with electronic or non electronic slaughter tags); b) EID animals (ie double-tagged, including one EID identifier) moving to an approved CPRC; c) moves within your business to a different (non-adjacent) CPH if there is no change of keepership