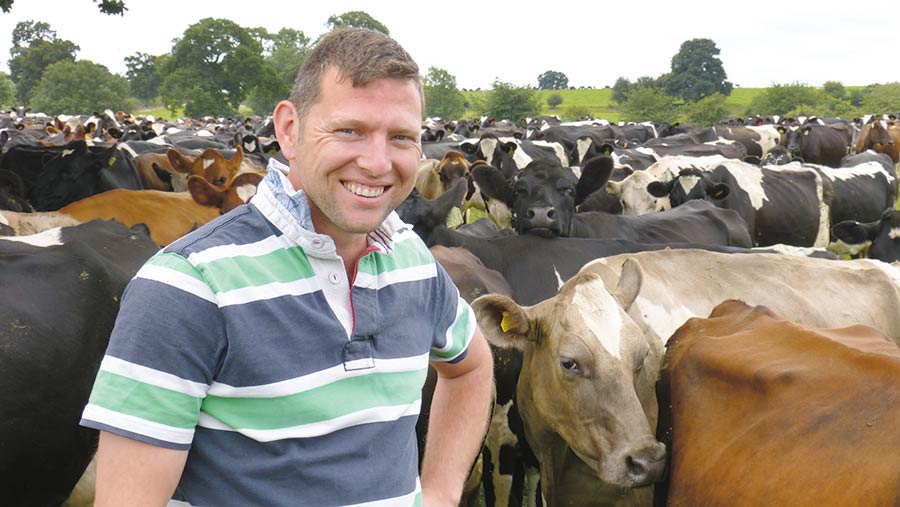 Using Jersey/Friesian Kiwi-cross genetics from CRV, LIC and stock bulls, Mr Lovatt, co-director of Old Ford Farms with dairy farmer John Furnival, has been able to retain heifers and expand a 200-cow herd by taking on land at the Seighford Settled Estate, Staffordshire, as it has become available.

Now milking 770 cows and expecting to calve more than 900 in February, Mr Lovatt’s progression started in 2009, when he returned home from two herd manager jobs in New Zealand to work as a herd manager in Cheshire for John and Jane Furnival for 18 months.

Running the farm allowed Mr Lovatt to manage a herd himself. Mr Lovatt was paid a wage by Mr Furnival and started building equity through a 6.5% share in the partnership, which was effectively the value of the stock and the machinery.

After proving himself to both the estate and the bank, Mr Lovatt agreed with Mr Furnival to split the company, Furnival Farms Ltd, (15% to Mr Lovatt) to create Old Ford Farms early in February 2015, when they started milking at New Grange Farm just over the road from Old Ford.

Nowadays Mr Lovatt is building more equity in the business by expanding heifer numbers so a real focus has been placed on herd growth.

“I don’t know of many equity-type partnerships like this in the UK,” says Mr Lovatt.

Kiwi-cross heifer calves have stayed on the farm and the ability to experiment with stocking rates (between 2.5 cows/ha and 3.6 cows/ha) and increase pasture production (9.5t DM/ha a year to 12-13tDM/ha a year) has allowed herd expansion to spread out on to new grazing pads.

“Dan’s time spent abroad has proved hugely useful, explains Mr Furnival. “Dan has a very inquiring mind and he’s not afraid to ask questions. He has built a good team around him and he loves cows – that’s important.”

Bred replacements spend the first year at Old Ford Farm before being contract-farmed for a second year in Shropshire. In all, Mr Lovatt and Mr Furnival have bought 210 heifers to arrive at current numbers and each year 300 heifer replacements are produced, with Mr Lovatt taking the lion’s share of 200 for use on New Grange and Old Ford Farm. The remainder go to Manor Farm. 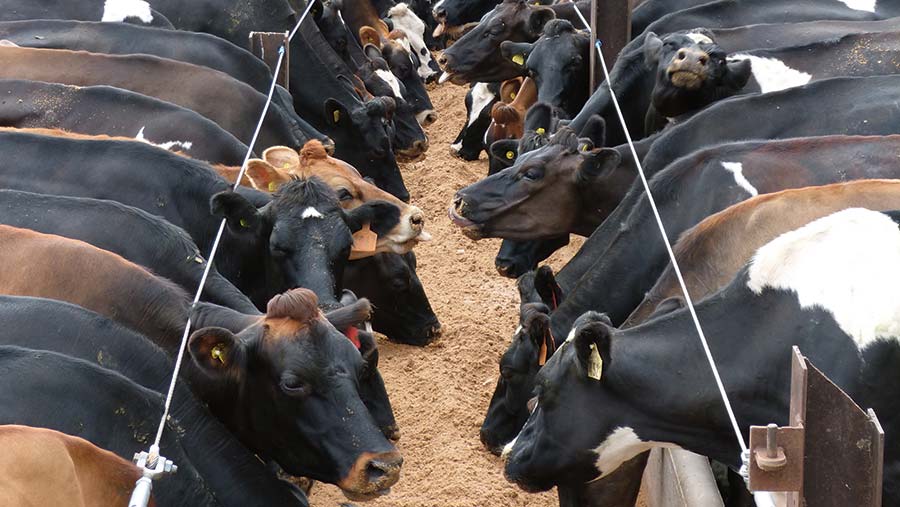 Heifer calves have been retained to calve at two years old after being served at 15 months at 60% of mature weight. This varies between 250kg and 300kg, with most cows reaching 450kg at mature size.

These animals have been added to the original Manor Farm cows, of which 150 are still in the herd and are now at least nine years old.

Health and medicine costs are budgeted at 0.7p/litre (£35 a cow) including bovine viral diarrhoea and leptospirosis vaccinations.

Last year replacement rates were at 9%, explains Mr Lovatt, who had 39 empty cows away as culls and lost 41 milkers through bovine tuberculosis. But the replacement rate has been as low as 3.5% and stood at 5-6% in 2013 and 2014.

“Lameness is not an issue because Tom, who works here, trims any problems, and hopefully neither is mastitis,” says Mr Lovatt. “The main reason a cow leaves here is because she hasn’t got back in calf. I feel as if the cow has failed if she hasn’t managed six lactations.”

The partnership started off supplying 1.2 million litres in 2011, with the mature cows averaging 4,750 litres, on a processing contract to local buyer Joseph Heler. Milk Link then became the supplier and then Arla after the 2012 merger.

Now the farm produces 4m litres a year and is expecting to supply Arla with 5m litres in 2017.

A feed pad offers flexibility of supplementation and the potential to lift production across the twice-a-day milking. This is being tried this year to good effect, lifting yields from 16-17 litres a day to nearer 20 litres.

As an Arla manufacturing pool member, the farm has the option of increasing mid/late summer production through a slightly higher price on B litres.

“We have been incentivised to produce a little more so we have added 10kg a head a day freshweight of a distiller’s by-product and some bread,” says Mr Lovatt.

Much of the land taken on across several rental agreements has been reseeded, with 80% of the grazing platform now growing a 50:50 mix of 6kg each of a ryegrass tetraploid and a diploid and 1kg of clover at 13kg/acre (32 kg/ha overall).

Every field has been soil sampled yearly as the herd has grown and has been mapped on Soil Quest. Potash and phosphate levels are going on at varied rates and are tailored to specific fields.

Summer rainfall can be a limiting factor (68cm/year) and potash is used to maintain growth through the dry periods, which has still been at 60kg DM/ha a day through the mid-summer period. Nitrogen is applied according to grazing round length – a 30-day round gets roughly 30kg/ha nitrogen, a 60-day round gets 60kg/ha nitrogen, with fertiliser cots coming in under budget this year at 1.75p/litre.

“I have been experimenting with liquid fertiliser urea ammonium nitrate (UAN) at 26 parts nitrogen and five parts sulphur for quicker uptake so cows can get back on fields faster,” says Mr Lovatt. “Small fields mean there is a lot of headland to cover and you can see to the inch where you have been with the liquid – the results look good so far.”

The New Zealand system calls for cows to calve down at BCS 5.0, although heifers and second-calvers will ideally calve at 5.5, says Mr Lovatt. Condition loss after calving should be no more than an average of 1.0 BCS.

A group of 26 cross-bred bulls sweep round for seven to eight weeks after four to five weeks of AI. Nine-month-old bull calves are bought every October and each year around 10 bulls are sold for slaughter as they reach the age of four, before they become “too much of a handful”.

Straws are selected from the top 10-15 bulls rated for Breeding Worth on the Ranking of Active Sires (RAS) list. This means last year’s bulls were all at breeding worth values above 200, with strong emphasis placed on milk components, fertility and residual survival (an indicator of cow longevity).

Peak calving season comes in February, when the team is tagging 25-30 calves each day, which is “pressure time” for the outdoor cows. However, the cross-bred cows and bulls mean easy calving and low calf birthweights of 15-20kg.

“We pulled only five calves this spring,” explains Mr Lovatt, who has reported one fatality this year, a three-month old calf with bloat.

Early calvers supply colostrum and whole milk to the New Grange tank – effectively using it as an early-season colostrum farm – before cows are then transferred to Old Ford Farm if they are in good condition. This flexible system maximises labour and minimises hassle, explains Mr Lovatt.