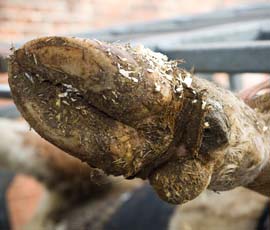 Speaking at the 2011 BVA AWF discussion forum, Mr Wensley said the drive for ever cheaper food has resulted in poor animal welfare conditions and many of the UK farming systems are “intrinsically incapable of achieving a good quality of life for animals”.

He said the true cost of low food prices is seen through persistent problems on UK farms such as contact dermatitis in broiler chickens, lameness in dairy cows and mutilation through tail docking without anaesthesia in pigs.

“The goal of ever cheaper food has been the principal driver of these problems; dropping the price of a product is fine until the true cost is put on animal welfare,” said Mr Wensley.

“It’s necessary to inform and educate citizens that these things are happening, because although ethical consumerism will never be advocated as the only medium for change, at the moment it’s the fastest and most effective solution.”

He added: “For as long as the welfare-friendly shopper is championed as the key to improving standards, then it’s down to us to purchase and promote welfare-friendly food so we are part of the solution and not contributing to the problem.”

He praised the work of assurance schemes such as the Red Tractor logo and Freedom Food and said by continuing to place emphasis on higher welfare products such as free-range eggs, improvements in farm animal welfare could be made.