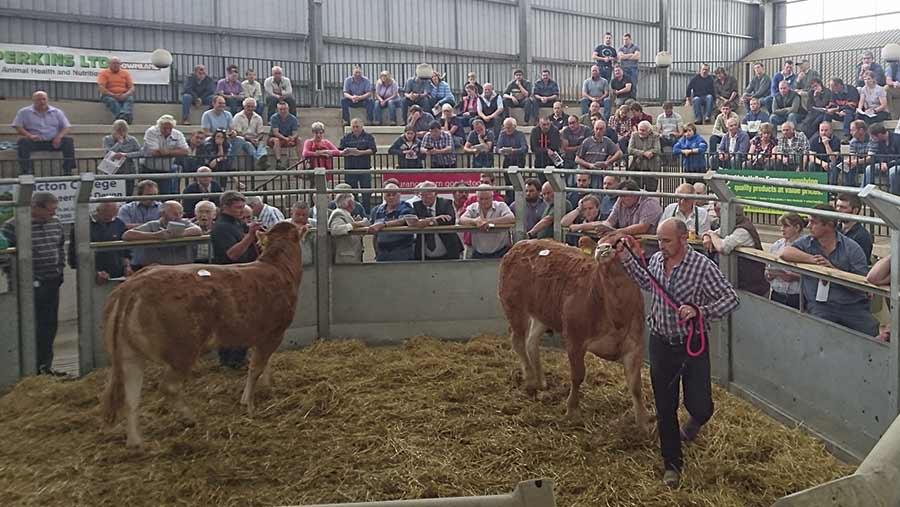 A cracking entry of pedigree Limousin Cattle topped at 3,750gns and sold to 100% clearance at the summer sale at Exeter Livestock Centre, Devon, last Friday (23 June).

First through the ring was an outstanding entry of 10 cows and calves from the Sloughpool herd of Messrs MM Gollop and Son, Cullompton.

They saw huge demand, topping at 3,000gns for Sloughpool Heather, a 2012 born cow by Ampertaine Clinton. She sold with her January-born heifer calf by Loosebeare Ipad at foot to Alan Cottle, Moretonhampstead.

Also peaking at 3,000gns was an outfit from Tony and Jo Smith, Jacobstow. Their trade toppers were Smithy Imogen, a 2013 born daughter of Mas Du Clo, and her January-born heifer calf. Buyer was Richard Webber, Wheddon Cross. They also topped the heifer section with a yearling heifer out of Breizizel and by Smithy Jurassic. She sold for 2,500gns to Colin Davey, Launceston.

Next best at 3,000gns each was Messrs JH Neale and Son, Launceston, with two young bulls, born in March and April 2016, and both sired by Glenrock Fortune. The oldest bull in the sale, from Patrick Greed, was Killerton Lupin by Fieldson Alfie. He made 2,500gns.