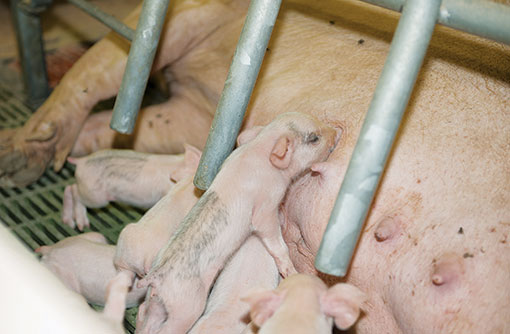 Measuring breeding performance with numbers weaned for every pig place may be a better way for pig producers to gauge their system’s success. Dr Grant Walling, director of science and technology at JSR Genetics, explains.

When it comes to measuring success, many business owners look at their profitability and efficiency – being able to maximise returns, while managing costs.

Interestingly, most of the key performance indicators (KPIs) quoted when discussing pig production businesses are those related to the biological performance of the animals.

While figures such as farrowing rate, numbers born alive, numbers weaned or mortality statistics in the production system contribute to the success of such a business, they can fail to accurately reflect company performance.

Flaws when using a single KPI

I have seen significant examples of this through working abroad with international pig producers.

In one instance, a pig production business proudly discussed how, by paying a staff bonus on pre-weaning mortality, they had brought the figure down to below 8% – which is very commendable.

But what the business had not recognised was that at the same time, the numbers born alive had reduced by similar proportions.

Staff were simply not recording animals they thought would struggle to survive through to weaning in order to maximise their bonus.

What makes this practice even more damaging for businesses is that considerable time, effort and resources were then being diverted into addressing the born-alive problem on the unit – an issue that did not exist. It illustrates the problem with an over-reliance on using a single KPI.

I have visited overseas businesses with some very good production figures, but seen the owners struggling to stay afloat because they were not generating sufficient income.

Farm staff were puzzled, thinking they were doing a good job, yet output was such that it was failing to fund the running of the business.

Another problem is the difficulty in comparing what should be the same KPI across businesses.

A measure such as weaned piglet a sow a year is something a lot of businesses quote with most, working within the UK legal framework, aiming for a figure of about 30.

However, the timing at which a gilt “enters” the herd has a huge bearing on this figure, as some include them in the calculation from 210 days, others from first service and others at first farrowing.

Likewise, the removal of cull sows from the calculation also has a significant bearing on the final sum, despite being irrelevant to the productivity of the farm.

Searching for the right KPI

To search for the right KPI and the solution to both of these problems, we need to look at two keys areas of pig production businesses.

One is the limiting factor on production, which will nearly always be the number of farrowing places on farm, and the other is the only source of income – the number of pigs that are sold from the facility.

Combining these two figures leaves us with the most important KPI for a pig production business – numbers of pigs weaned for every farrowing place.

This KPI ensures the staff sweat the assets of the facility and maximise income to the farm.

The beauty of such a calculation is that unlike other measures, the figures cannot be manipulated by recording gilts later in life or artificially reducing a figure elsewhere.

The number of farrowing places on a farm is quantifiable and finite. Once a facility is built, the number doesn’t change and hence provides a consistent base to the figure.

The number of pigs weaned should also be a simple figure that cannot be manipulated – a piglet is either weaned from the sow or remains suckling, it is not possible to double count.

By using these figures, the genuine efficiency of the unit can be measured and calculated and, given the attention on the numbers of animals produced, directly correlates to the income entering the business.

Once businesses start using this KPI, their view of pig production changes significantly. Ensuring all the farrowing places are always full becomes a larger priority than the born-alive figure for the week, and it is easy to see why.

Consider two identical farms with 32 farrowing places a week. One fills all the places and weans 12 pigs for every place making a total of 384 pigs weaned.

The other farm that has three empty farrowing places in the same week, would need to wean 13.2 pigs for every place used just to match the first farm and therefore, would probably need a born-alive figure in excess of 14 to achieve this.

Numbers weaned for every place gives business managers a true indicator of the efficiency of their business and their return on investment on farrowing rooms.