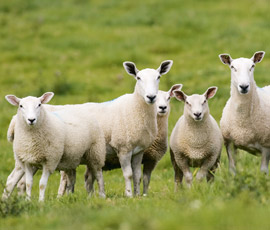 Opting to have a post-mortem conducted on livestock at fallen stock centres could improve data on disease incidence and encourage improved health planning on farm.

Currently farmers wishing to get a diagnosis for animal disease issues may approach their vet or the Animal Health Veterinary Laboratories Agency (AHVLA). However, with the role of regional AHVLA laboratories under review, a reduced service may be available for post-mortem diagnosis in the future.

“This is why we decided to look at whether post-mortems at fallen stock centres could be used to make a diagnosis,” said vet Fiona Lovatt of veterinary consultancy Flock Health. “We wanted to see whether carcasses had a diagnostic value at fallen stocks centres and of what value it would be to the industry.”

Speaking at an EBLEX research and development workshop, Ms Lovatt said the study, which included more than 100 post-mortems on adult sheep, concluded it was possible to diagnose the cause of death from fallen stock.

“In 20% of cases we didn’t get a diagnosis and nine percent were too far gone to diagnose. However, in 70% of ewes we got a diagnosis, with mastitis in May/June and acute fluke from October onwards the most common problems,” she said.

Ms Lovatt emphasised how valuable fallen stock examinations could be as an early warning system.

“If farmers had one or two ewes dying and the cause wasn’t obvious, the fallen stock post-mortem option could be as simple as farmers ticking a box to indicate they want their animals examined for a small cost. The results could reveal they have an acute fluke problem, for example, which could alert the farmer to take action and prevent more deaths on farm,” she said.

Examining dead stock at fallen stock centres could also alert livestock producers to other diseases that are currently underdiagnosed in the UK. The study found six percent of ewes examined had ovine pulmonary ademomatosis (OPA), which cannot be diagnosed in the live animal. Six percent also had Johne’s disease, which is underdiagnosed due to poor sensitivity in the live animal test.

Ben Strugnell from the AHVLA said if such a scheme was to be adopted at fallen stock centres, farmers could expect to pay about £73.20 per post-mortem. “This is roughly in line with what farmers currently spend on getting a post-mortem diagnosis.”

The implementation of post-mortem facilities at fallen centres depends on the review of the AHVLA surveillance system, which is under way at present, said Ms Lovatt. “When a decision is made about the regional laboratories, we can look to see where the gaps are in the regional lab network and look at how we address it.

“We are still not sure which way it will go and have not considered elements such as how we would staff post-mortem facilities at fallen stock centres. However, at the Hamsterley fallen stock centre in County Durham, we have been looking at putting in a post-mortem facility as it looks like the Thirsk laboratory could be at risk of closure,” she said.

Join in the discussion on fallen stock removal