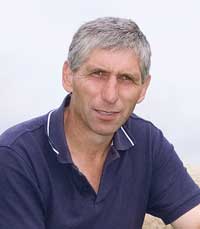 When a local breeder casually dropped into the conversation that his shearlings were selling fast, we took the bait and rushed over to buy three Charollais rams, months before we need them. After a break of several years, we are again in the market for a couple of Suffolks.

The premium paid by most abattoirs for E and U grades has remained unchanged for years and in some cases been dropped altogether. There seems little point in pursuing the undoubted superior conformation of a certain white-faced Continental if, as we have found, it is done at the expense of growth rate.

Most lambs are now weaned, with a flock of the more forward receiving a small amount of dry feed. For a week 250 disappeared from view in a field of rape and grass seeds, before eating their way to the surface. Like last year about 10% of them have lost much of the skin from their ears as though sunburned, a phenomenon not yet fully explained. We have also begun feeding rolled barley to finishing cattle.

For the third time in as many years, mowing grass left to bulk up a little at the end of June, remains uncut a month later and is no longer a belly-filler for cattle. The 16 acres of green crop sown in early July enjoyed the wet weather and has got off to a good start. After last year’s success, I once again broadcast the seed on to the furrows and rolled.

I’m beginning to tire of attending potentially informative meetings on the implications of EID only to witness a few individuals seize the floor to bellow their intent to quit sheep farming the moment it is introduced. The buoyant breeding ewe trade would suggest most of us intend to continue.