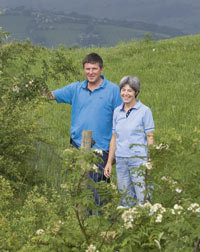 It has been a busy and frustrating month, with the busy bit consisting of celebrations, as Alex had her 50th birthday.

The frustrating bit was the weather, as on Gower by the end of August harvest was still not at the halfway stage, with spring barley, wheat and oats still to be gathered in. Men and machines were definitely stressed.

We took 50 yearling Welsh Mule ewes from Rhossili to Llandeilo market recently, and were pleased to make more than £100 a ewe.

At Cwmfron we have been able to haul in some reasonable straw, paying about £10/t more than last year. Feed barley is quoted at £92 for immediate delivery. When we accept the quote it means grain will be £20/t less than last winter and £50/t less than April 2008.

Lamb weaning is complete, but wet weather means prime lambs have been going off slowly, with the current net average being £54.32 for carcasses of 16.78 kg. Store cattle prices have been good, but somehow Alex hasn’t noticed and thinks the price I want for my Angus stores is high.

We have been lucky with maggots on sheep this year. However, just as we were congratulating ourselves, we found them on the backs of several 10-day-old calves a first on this farm.

Alex attended a National Assembly for Wales meeting on sheep EID. She returned to tell me the hardware was not perfected, the minister has not decided on the rules for slaughter sheep and any benefits would never justify the work, cost or paperwork involved.

Finally, we are proud to say after years of hard work, Jason, our eldest son, qualified as an accountant in August.