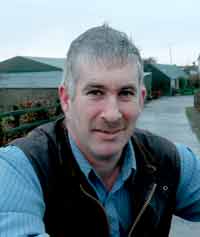 Our two main Texel sales have just passed and we are delighted as our lambs have thrived better this year, although it’s hard to put our finger on what made the difference.

Like everything else it’s probably a combination of small factors. Lambs got their first dose of Vecoxen earlier, were introduced to creep feed earlier and were put onto a reseed after being weaned. Although the breeding was mainly the same, our lambs improved dramatically over the past couple of years, averaging almost 1200gns for eight at Dungannon and Clougher President achieving 14,000gns at Lanark. All the best to all our customers.

Our decision earlier this year to part with our trusted old combine has been vindicated as we are in the midst of one of the wettest harvests in memory. The change in weather pattern has made me take the decision to cease growing grain and apart from a little whole-crop we have no plans to reintroduce cereals. A fair number of cattle are now on winter-feed and unless a good spell comes quickly, I fear they could be housed for the winter.

In February I told you about queuing for the Farm Modernisation Scheme. Seven months later we have received letters telling us that although our application satisfied the programme level selection criteria, due to insufficient funds our application has not been successful.

I think that along with the majority of farmers in Northern Ireland we have sent a clear message to DARD and the Rural Development Programme that this scheme should be fully funded as a priority rather than many of their other strands which may create jobs for administrators and department staff but deliver less real benefit to farming businesses.