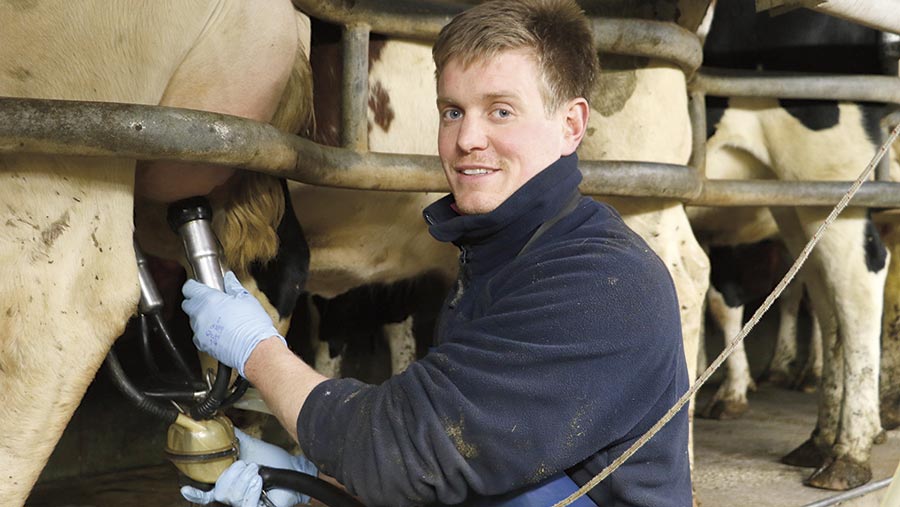 I may have spoken too soon in last month’s column. We have just finished last year’s first-cut silage and lost one litre of milk a cow on average since moving on to the slightly wetter second cut.

On a positive note, we have started selling barren cows back at Shrewsbury Market for the first time in years after previously selling direct to the abattoir. We averaged more than £900 a head for eight barrens, so it was well worth the trip.

The weather has certainly tested us over the past few weeks. We have learned from previous experience that our herringbone parlour is the first thing to freeze up, so we were quick to cover it with silage sheets and use industrial heaters on the inside.

We have recently started to weigh our calves every other week and it was particularly interesting to note that weight gains dropped from 0.9kg a day to nearly half that in some cases – even with calf coats and straw bales to protect them from the easterly wind.

The unforeseen challenge of the week was the snow drifts and I lost count of how many times I had to dig the lane out with the JCB. We were lucky the drifts didn’t stop the tanker driver picking up the milk, although it did take more than two hours to get him down our lane. I must thank our contractor Stevie, who came to the rescue at 2am.

Within a few days the worst of it melted and I was able to get the first application of fertiliser spread on the silage and grazing ground before the rain set in.

We have just done our 2018-19 budgets and the biggest conundrum was at what level we should set the milk price. This uncertainty makes any significant investment hard to plan for, or justify, and is massively demoralising.

Surely, with the demands put on us by milk buyers to be efficient and maintain high health and welfare, this is something that needs addressing?

Henry Wilson milks 225 Holsteins on a tenancy alongside his parents Jean and Chris in Alberbury, Shropshire. Cows calve year-round with milk supplied to Muller on a non-aligned contract. Focus is placed on good cow health, fertility and business efficiency.