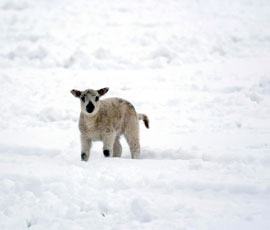 Sheep farmers are counting the cost after snow, gales and blizzards caused hundreds of lambing losses in northern England.

The NFU said it was too early at this stage to put a number on the total losses, but some farms have been hit hard.

Rachael Gillbanks, NFU spokesman for the North East, said: “It’s clear from the multiple reports that I have been receiving that we are looking at hundreds of losses across the region.

“The speed that the snow came in overnight on Tuesday and the amount – there has been 6-8 inches in parts – along with the terrifically strong winds, has caused real problems.”

Ms Gillbanks said the worst affected regions appeared to be North Yorkshire, the Yorkshire Moors and Saddleworth Moor – but parts of Northumberland have also been badly affected.

“Our group secretary in Huddersfield reported that sheep had been buried in snow and when he had gone out to retrieve them, there was only 10ft visibility,” added Ms Gillbanks.

“Other farmers are having to dig their sheep out of snow drifts, but when they get them out, they are dead.”

Northumberland sheep farmer Hans Porksen said lambing was well under way in the region in lowland flocks and farmers who have their lambs outside appeared to have suffered some bad losses.

“We do lambing on our own farm indoors, so we didn’t have any losses. But some people have lost up to one third of their lambs,” said Mr Porksen.

“One farmer had 54 lambs running around, but 17 died. The ones that were born that night just perished.”

By Thursday, the biting winds had been replaced by sunshine and deep blue skies, but Mr Porksen was still battling with an 18ft snowdrift on his farm.

“The weather is all topsy-turvy – you just can’t explain it,” he said. “You’ve just got to put up with it.”

“However, despite snow falls over 1ft high in some parts of Scotland, to date we’re only dealing with a few claims for snow and wind damage to properties in the Borders region.

“We may see more claims coming in over the next few days, patricularly from people who have had power cut off for long periods and have lost the contents of their freezers.”

• Have your say on the weather on our Spring Forum