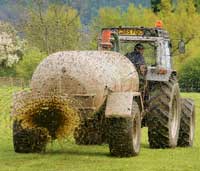 That’s the advice of Green Gem Agriculture agronomist, Ian Grandfield, who says farmers have “much to gain and a lot to lose” if they don’t set about tackling soil phosphate levels, which have risen significantly in recent years.

“Big savings can be made on fertiliser applications where compounds are applied containing phosphate that’s not needed. And too much phosphate in the soil – a situation that’s now widespread after years of using maize land for winter slurry spreading – can lead to considerable maize yield losses, which could be even greater in dry years.”

Getting the phosphate application correct will lead to a higher quality maize crop with good starch content and more grain, according to Mr Grandfield. But as well as the economic advantages of knowing your soil’s precise phosphate index, there’s growing concern within the Environment Agency about phosphate pollution from soil run-off – something the EA is tackling through its Water Framework Directive.

“In parts of Shropshire some dairy farmers have been advised by the Farming and Wildlife Advisory Group to stop growing maize because of the pollution risks to water courses,” says Mr Grandfield.

Phosphate is a major nutrient requirement of growing crops, but it fulfils a specific role in maize agronomy, being responsible not only for good establishment of the young crop, but also for setting the grain.

“There’s a vast pool of phosphate that exists in the soil. When soil testing shows a phosphate index of four the alarm bells should start ringing. Indices of five and six mean there are real problems to be addressed. Phosphate will impact on the availability of other elements as the level in the soil increases.

“Zinc availability can be affected, just as it’s influenced by the presence of high levels of nitrogen or potash,” adds Mr Grandfield.

He says it’s now unusual for him to come across soil phosphate levels of less than two – a situation that was widespread 10 years ago. “I’m now seeing far more levels of four, five and six.”

Farmers growing forage maize are advised to know their phosphate levels to help them assess nutrient requirements. Where indices are high the maize crop won’t suffer if phosphate application is withheld, although factors affecting the availability of phosphate are complicated and involve pH and soil temperature.

“There are farms where the soil phosphate index is up to six and as well as posing a pollution risk to adjoining water-courses, these farms have suffered a reduction in maize yields over recent years as a direct result of the higher phosphate level.

The phosphate locks up the zinc and because of the impact that can have on moisture absorption – as well as enzyme action and grain development – yields are taking a dive.

“These farms are in a dilemma because the land concerned is needed for slurry spreading during the winter. It looks as though zinc will have to be used on this land as a micro-granular fertiliser to re-dress the impact of the phosphate. Particularly where zinc levels are low it can be worth considering a foliar application of zinc.”

Where farmers have land with lower phosphate indices, appropriate levels of slurry and/or farmyard manure will generally apply sufficient phosphate for the crop. In the past, starter fertilisers used have been di-ammonium phosphate and mono-ammonium phosphate, which tend to be 12.52 or 18.46 grades – in other words a little nitrogen but a lot of phosphate.

“But 52kg of phosphate applied in one go is far more than the crop actually needs as a starter – it’s the crop’s entire needs for the season. So we need to use starter fertilisers that are much lower in phosphate, just as they are doing in Holland, where there’s growing concern over phosphate pollution,” he says.

Where UK soil tests show a phosphate level of four, great care should be given to phosphate application. Excessive slurry applications will lead to a continued rise in phosphate levels – and if these fields then receive a traditional application of starter fertiliser the phosphate presence will not only reduce yields but may well pose a pollution risk.

“Farms with phosphate levels at four or above should consider applying less slurry and the crop should be grown with nitrogen with added potash to compensate for any shortfall.

“There has to be a halt on any needless applications of phosphate and if a starter fertiliser is used it must be low in phosphate, with just enough to meet the needs of the plant in the first two weeks of establishment,” he says.