Our poultry farmer finalists this year occupy quite different parts of the sector. We have an egg producer-packer in Phil Crawley, who manages Sunrise Eggs with brother Ady.

Also in egg production but of a very different kind is Derek McKeown, who tends to grandparent broiler breeders, a highly technical operation where biosecurity and attention to detail are paramount.

Finally, Glen Powell is making waves within the integrator Moy Park, having turned around a underperforming unit and consequently producing some of the best results in the country.

The 2018 Poultry Farmer of the year finalists 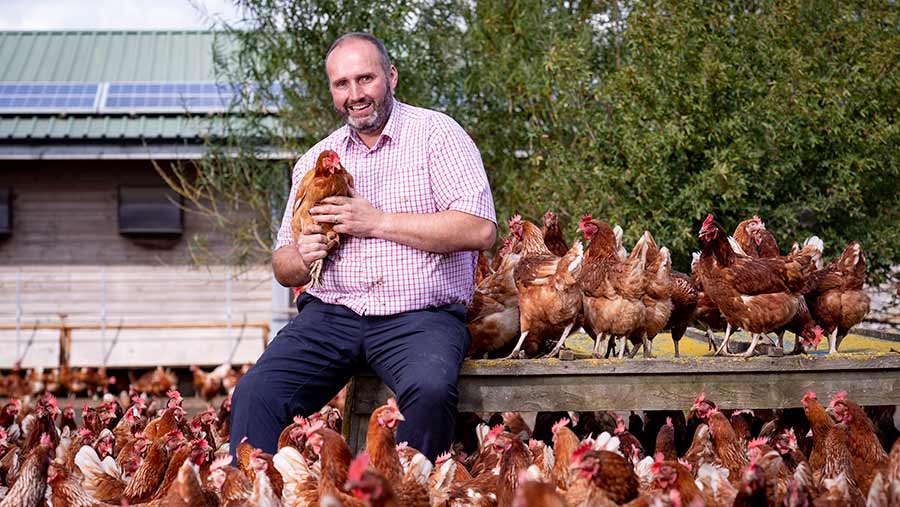 Sunrise Eggs is an egg producer-packer built up over two generations and today marketing the eggs of close to a million birds.

Established in the 1970s, it is a major player in the egg market, supplying retailers, restaurants and smaller shops across its native Leicestershire and beyond. The business farms 575,000 hens itself, and has about 300,000 additional hens producing eggs on contract.

Its joint MD, Phillip Crawley, is clearly proud of the operation his father first established after leaving a career as a nuclear physicist building reactors for nuclear submarines in the early 1970s.

Initially focused on pullet rearing, the outfit moved into caged hen production before switching focus to free-range as the relatively young industry grew.

These more recent years, withPhillip and his brother Ady at the helm, have been marked by innovation.

The farm was the first in the UK to trial LED lighting for its poultry sheds, back in 2013.

In the packing centre, they have invested heavily in automation, with robotic arms and sorting machines grading and placing eggs in their retail packaging.

Free-range egg production began in 1997 and there has been steady expansion since. “That is what the consumer wanted and shows the growth in free range”, says Phillip.

Production on a multi-age, multi-site set-up can be a challenge, but rather than the highest number of eggs, the focus is on quality. “Our interest is in first-quality class A eggs. As a producer-packer, we don’t make any money from second-grade eggs – we supply retail.”

Out on the farms, there has been investment in solar energy, but more noticeable is the extensive trees growing out on the range, with birds happily making full use of the shady space to exhibit natural behaviour.

“Tree planting didn’t feel right to start with,” says Phillip. “It was a funny pill to swallow, but it was the right pill. The birds like the trees.” To date, more than 60,000 trees have been planted across 40ha.

Overall, the business has steadily expanded alongside the growth in free-range and shows no sign of slowing.

“We actively encourage visits by Young Farmers, scouts and Brooksby Melton College,” says Phillip. He has also hosted children on the autistic spectrum and even people with varying levels of sight loss from the Royal National Institute of Blind People.

Within the poultry industry itself, Phillip acts as vice-chairman of the NFU’s poultry board, which helps drive the union’s lobbying effort for the sector.

He also represents the NFU at the Laying Hen Welfare Group, which works with Defra to develop policy sustainably.

Sunrise Eggs was also involved in beak trimming trials, a major issue for the poultry sector. It was one of the only commercial-scale farms involved in the project, and required a big personal risk that paid off for the wider industry.

On the prospects for his sector, Phillip says: “Poultry production has been the good news story in farming. It has grown and grown – it’s wonderful because it gives an added income to the business, and gives the next generation something to do on a family farm.”

As for the next generation of the business, Phillip says: “I would dearly love all to be involved, but it should be their decision, not mine.”

He concludes by saying Sunrise Eggs’ focus is on “quietly working all hours to build a family business that we’re very proud of, and we would like to celebrate that.”

“Sunrise Eggs is a big player in the egg industry, but the business retains a family touch, with Philip and his brother Ady heading up the farm their father founded in the early 1970s.” 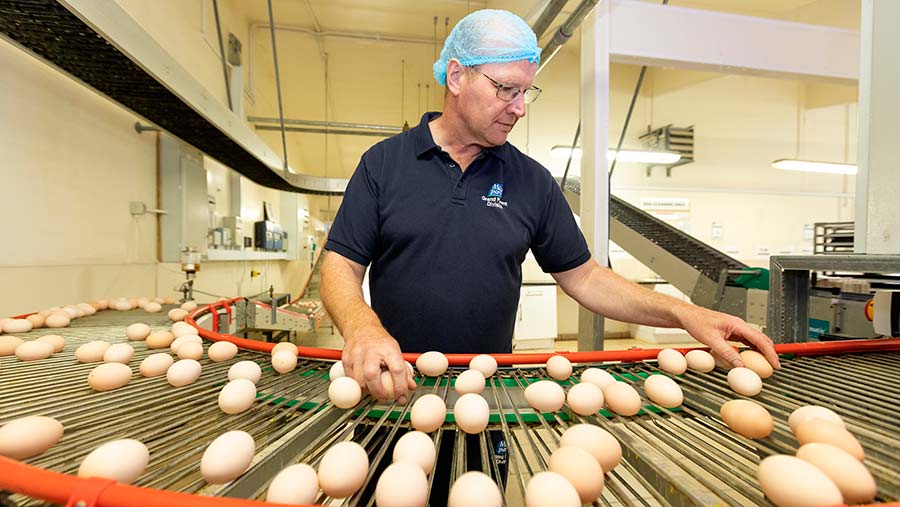 There is a reasonable chance that you have eaten a descendent of the genetic stock kept by Dereck McKeown in rural Northern Ireland.

While the farm only tends to 32,000 birds on site, the progeny from the eggs laid there produce parent stock that is shipped across the UK, Europe and occasionally beyond. That parent stock lays the eggs that then go on to become the broiler birds that end up on dining tables across the world.

“We’re very conscious that what happens behind those doors has a huge effect on the supply chain,” says Derek. “We’re always focused on the end result, the broiler chicken.”

The sheer numbers give an idea of the value of the stock in his care, and the procedures and rules surrounding his farm are strict.

It begins at the farm gate, which is locked at all times. Visitors are kept to an absolute minimum, and biosecurity is at the forefront of everything that is done on the farm.

Approaching in the car, wheels are disinfected before admission is granted to the spotless site.

From there, boot dips are obligatory, and visitors must be screened for disease before entering sheds. Regular deliveries of feed and egg collection is undertaken by the same few people, who are well versed in the rules of the farm, and for Derek and his family, the procedures surrounding farm hygiene are rigorous.

The day starts with showering into the site, and changing into fresh clothing every day. As Derek says, it’s taking care of the basics that yields the best results, and that begins with getting the birds fed.

At eight in the morning each day, feed tracks are lowered, giving the stock three hours in which to access their ration. “It’s good practice to be present – feeding is the one time of the day you can watch birds and spot the ones that are not eating or showing other signs that something’s not right,” explains Derek.

Collecting and sorting eggs is another big part of the operation, as is monitoring their quality – both to learn more about what is happening in each house, and to meet the exacting standards the operation requires.

Any cracks, double yolks or other defects can indicate an early health problem, so need investigating, and only the most flawless eggs can go on to be hatched as parent stock.

For antibiotics use there is the same pressure on this stock at the top of the tree as there is for farmers producing food. It’s part of the drive to produce more robust, healthy birds further down the chain, with birds more vigorously culled out rather than treated with medicines.

Blood sampling is taken every two weeks to both reassure customers that the health status of birds has been maintained throughout their laying life, and to detect any issues early on.

All this precision, passion and achievement is all the more surprising considering Derek only started out in poultry farming eight years ago. After a career in haulage, he decided poultry would provide a more secure income, and less stress.

While both conventional egg production and broiler rearing were options, he was attracted to the demanding – but ultimately rewarding – husbandry of grandparent stock. “It’s the Premier League of poultry production,” explains Derek.

“Derek and Jennifer are proof that entering the poultry sector can pay dividends. They are clearly suited to the dedication and attention to detail that producing top-quality genetic stock requires.” 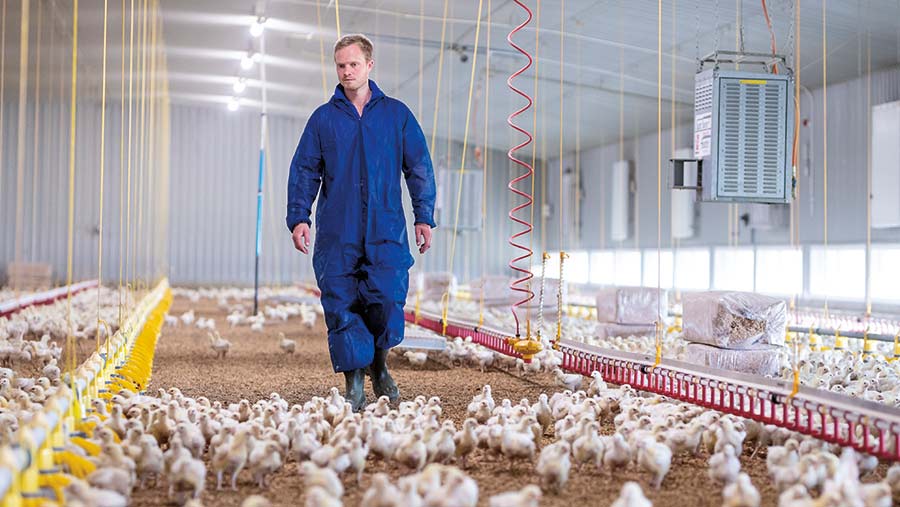 For Moy Park, one of the UK’s leading poultry production businesses, employing Glen Powell when there were no vacancies proved a shrewd move.

He has since grown from assisting with chick deliveries to managing one of the firm’s most interesting new sites – a double-decker broiler farm with a 189,000-bird capacity.

He has come a long way to find himself at that point. Glen has no background in poultry farming, having grown up in urban Essex, and began as many do helping out on a free-range egg business after school.

An early passion translated to school holidays and weekends helping out on a range of farms that were predominantly smaller, traditional flat-deck systems.

He recalls it was dirty work, with climbing under nest boxes to collect floor eggs being a particularly messy job.

The move to broiler farming, with many thousands more birds, was a big change – less dirt and more precision, as getting the atmosphere right in sheds is by far the most important way to improve performance.

After about nine months as part of the team placing chicks, Glen was himself placed on Redbarn Farm as assistant manager, where he learned the broad base of skills that broiler farming requires.

After a spell at a farm that grew birds on contract for Moy Park, he returned to the company in August 2016 to manage a newly rebuilt site – a double-decker poultry shed with three houses on lower levels and three above.

While it is not the only farm of its type in the UK, it is a rarity, and wasn’t performing well.

Glen quickly turned the farm around. In his first year on the site he posted an average feed conversion ratio of 1:1.51 and a European Production Efficiency Factor (a measure of poultry farm performance) just below 400.

For those unfamiliar with broiler production, they are very impressive figures indeed – and few farms in the UK would match these numbers.

This was achieved on a tight eight-crop-a-year schedule – with just five days’ turnaround between fully grown broilers leaving the sheds and new chicks arriving, there is little room for error.

It is attention to detail that brings these results, and relentless focus on the task at hand. The judges visited at turnaround, which could be considered as downtime, but the farm was in a flurry of activity, with bedding deliveries, cleaning and general preparation.

Glen explains the meticulous tricks to get chicks comfortable; laying out feed to get them eating as soon as possible, and ensuring cool, clean water is on offer from day one. From there, it is all about managing ventilation and lighting to ensure good growth rates and high welfare.

That management is clearly something Glen has a talent for. The site had received complaints about smells before his tenure, but his careful management of airflow brought these to an end. It is also a key to the high performance in the sheds.

Where next? Bigger and more complex sites beckon. “I think a fresh pair of eyes on any unit can bring some improvements,” he says.

And beyond? It’s hard to see Glen moving into the corporate side of an integrator, with such a clear passion for practical farming.

“Glen has come a long way in a relatively short period, from an after-school job collecting eggs to managing a complex site for Moy Park and producing astounding results to boot.”