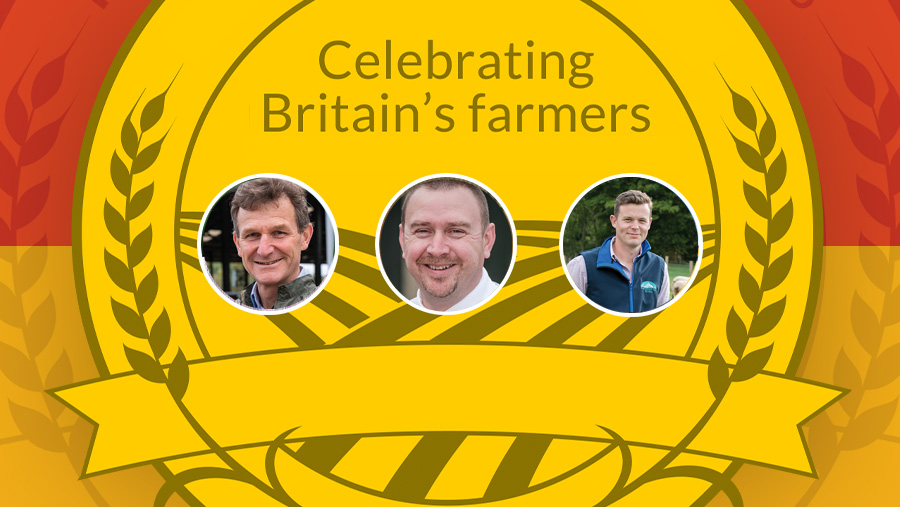 Livestock farmers are under pressure to become more efficient, cut antibiotics use and embrace more sustainable methods, so the most up-to-date advice is essential going forward.

The 2020 Livestock Farm Adviser of the Year finalists: 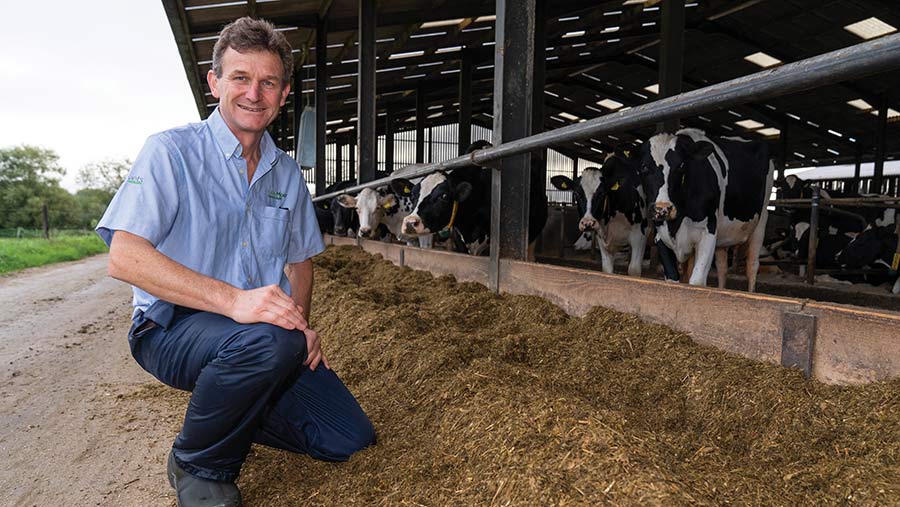 Julian Allen has helped a large Dorset dairy farm move to a non-soya diet for the milking herd and cut antibiotics use by two-thirds.

As a senior vet, Julian tackled the nutritional challenge of eliminating soya from the dairy diet, as demanded by a leading retailer.

A switch to using rapemeal started five years ago, with little difference in milk yields, showing that high-yielding dairy cows can thrive without soya in their diets.

Equally impressive is the fall in antibiotics use on the farm, and also across Julian’s vet practice, which covers north Dorset, south Somerset and south-west Wiltshire.

“Antibiotics use across the practice has halved in five years across dry cows, milkers and youngstock,” he says

Technical knowledge
Julian has dealt with the holy trinity of health challenges of mastitis, lameness and fertility on the Dorset holding at Hanford Farms, near Blandford Forum, which runs a 420-head dairy herd.

Mastitis has been tackled by a move to more hygienic sand in the cubicles rather than rubber mats, and also transferring dry cows to cubicles from straw yards.

Lameness prevention focuses on regular foot-baths and foot-trimming, and Julian has helped set up mobility scoring to identify problem cows.

Fertility starts with improving the diet of dry cows, fine-tuning it by edging up protein, nudging down energy levels, and giving the correct amount of minerals.

The result has been a calving index reduced to a mean average of 395 days, down from more than 400 days a few years ago.

Environmental credentials
The dietary transition from soya to rapemeal for the milking herd has been achieved without any dilution of yield and with clear environmental benefits.

The move to domestically grown rapemeal, instead of imported, genetically modified soya – which is increasingly grown in sensitive areas such as the Amazon basin – is being encouraged by a general move towards more home-grown protein.

Rapemeal is not as rich in protein as soya, so 4kg of rapemeal is equivalent to 2.25kg of soya, but there is a knock-on effect to concentrate use per litre of milk.

Antibiotics use has been reduced across all stock, and has been virtually eliminated for pneumonia in youngstock by providing better housing and ventilation.

Julian believes mastitis often originates from the dry cow environment, so the move to sand cubicles and the other actions taken have seen mastitis rates fall to 21 cases per 100 cows a year.

Client relationship
Farm manager Martin Monckton at Hanford Farms has worked with Julian for eight years, and has known him for 20 years.

“Julian has helped us reduce antibiotics use by two-thirds on this farm in eight years,” says Martin.

Now, 87% of cows don’t need antibiotics when drying off.

Martin says Julian has help redesign ventilation and housing for the farm’s youngstock, while his introduction of mobility scoring has helped improve herd health.

“Julian is up to date with all the very latest developments in dairy herd health, and is able to communicate it in a way farmers can clearly understand.”

The judges liked…
• A forensic analysis of all concerns and problems and an ability to come up with practical on-farm solutions
• Involved with all aspects of dairy cow health, from housing to nutrition, as well as looking to maximise milk production
• Dedication and enthusiasm in his work with the attitude that nothing is too much to improve the health of the herd 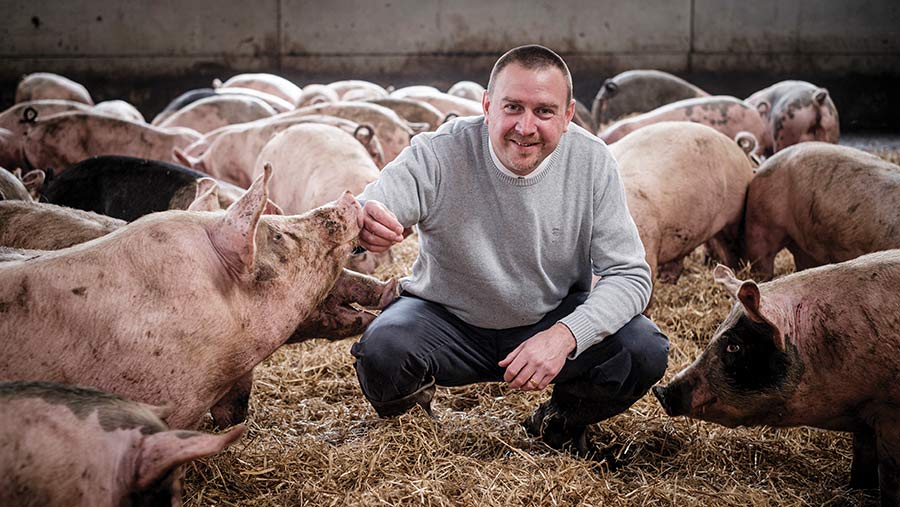 Phil Baynes is trimming feed costs for one of his pig farming clients while using more home-grown protein crops. He has also helped the herd cope well through a summer heatwave.

As a pig nutritional expert, he has introduced mill-and-mix feed to a large Oxfordshire pig herd to cut £20/t from feed costs, while encouraging more home-grown beans in the ration.

During the heatwave of the early summer, he quickly switched to a more concentrated diet with less fibre, as the appetite of the pigs dipped in the sweltering heat.

He encourages a greater reliance on farm-grown feed, with wheat, barley, rye, beans – and in the future peas – being fed to cut the reliance on imported soya.

“We are reducing the reliance on imported soya as we move to a more sustainable system with little effect on the health of the pigs,” he says.

Technical knowledge
Soya is highly digestible and has an excellent amino acid profile for pig nutrition, but levels are being cut with the focus on increasing home-grown protein on the Oxfordshire farm.

Piglets at the outdoor unit are weaned at four weeks and brought inside at 11 weeks, and all indoor feed is now mill-and-mix, using farm-produced crops plus a dwindling amount of soya.

A non-soya diet could be possible, but is not economic at the moment, and protein-rich soya is crucial for lactating sows.

Environmental credentials
Phil is busy looking at replacing zinc oxide – which is used to fight E coli bacteria and is set to be banned by 2022 – with essential oils and organic acids.

“We are making good progress in removing zinc oxide from the pig diet,” he says.

Work is also under way with the farm’s vet to reduce leg weakness in post-weaning pigs, caused by very fast-growing piglets and poor genetics.

He is adding calcium and phosphorus to the diet to rectify this problem, but is acutely aware that added levels can upset the dietary intake, and is supplementing this by adding ivitamin D.

“A lot of these leg problems are genetic, but rations can help the situation,” he says.

Client relationship
Phil works closely with farm manager Justin Willoughby on the Oxfordshire pig unit, with 350 outdoor sows and piglets brought inside at 11 weeks old to finish in sheds.

“The big influence that Phil has brought is cutting the cost of feed, and making us more aware of what is in the feed,” says Justin.

All feed was bought in before Phil arrived on the farm three years ago, and he now formulates all the pig rations, which can change up to seven times for finishing pigs.

All samples of wheat, barley, rye and beans are now taken away and analysed by Phil, and the mill-and-mix truck arrives every two weeks to formulate diets with bought-in ingredients such as vegetable oils, soya and minerals added.

“Phil makes use of the latest cutting-edge research to drive innovation and progress for all his clients, whether intensive indoor units or extensive rare breed herds.”

The judges liked
• Very technically minded and knowledgeable about his particular interest, covering all aspects of pig nutrition
• Has good relationships with his clients, and is very much hands-on for the day-to-day problem-solving tasks
• Passionate about the pig industry and always striving to make improvements and raise profitability 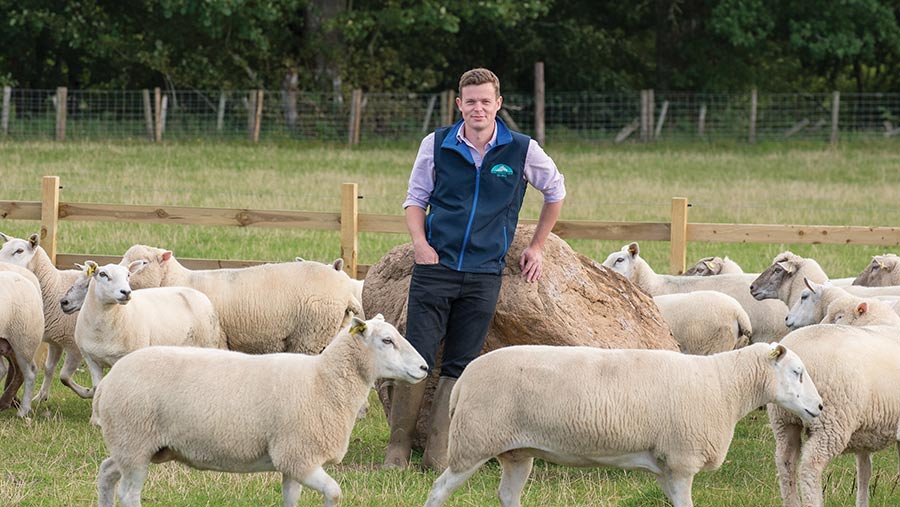 Ed Hill is using lung scanning to reduce – and hopefully eliminate – a fatal contagious tumour disease from the sheep flocks under his care, with the cost often covered by the sale of culled ewes.

He is one of the first vets to use on-farm ultrasound scanning of a sheep’s lung after the technique was pioneered by university scientists.

The disease – ovine pulmonary adenocarcinoma (OPA) – is spread by a virus transmitted by nose-to-nose contact and colostrum, and there are no treatments or blood tests.

It tends to be more prevalent in Scottish Blackface flocks, and although scanning both sides of a ewe is hard work, it had produced impressive results at Ed’s vet practice, which stretches from the high Cairngorm mountains to the fertile Strathmore valley.

“In one flock we have reduced the incidence rom 10% to 1% of ewes over four years, with the scanning costs often covered by the value of the culled ewes,” says Ed.

Technical knowledge
He has encouraged 23 farming clients to form a flock health club to proactively manage disease prevention, as he looks to focus his vet work on sheep health.

Clients Neil and Debbie McGowan were seeing increasing problems from the bacterial infection joint ill, and rather than prescribe blanket antibiotics, Ed tried to find the source of the infection.

Using ear tags at birth from a large container was identified as a possible cause. Neil now uses smaller batches to limit disease spread and disinfects individual tags before use.

“We are now seeing a lot less joint ill on the farm, and this came about without using antibiotics,” says Ed.

Antibiotics use has also fallen as a tool against lameness and abortion in the practice’s sheep, which can range from Blackface hill flocks to small pedigree flocks towards Dundee.

Environmental credentials
Ed is also tackling diseases such as caseous lymphadenitis (CLA) through quarantine and blood testing. One Texel ram brought onto Neil’s farm was quarantined, tested positive and so was sent for slaughter.

“For the cost of a £50 test we were able to stop CLA getting into the flock which could have cost tens of thousand of pounds,“ says Ed.

If the disease had entered the flock, a test-and-cull policy would have been adopted to eradicate it, with all the associated disruptions and financial loss.

Ed has also looked to do blood tests on lambs for signs of liver fluke – a parasite that is spread by snails and so tends to increase during wet summers.

By doing blood tests, the farm was able to delay any treatment until December, thus saving money and timing the treatment accurately.

Client relationship
The McGowans farm 500ha at Incheoch, 20 miles north of Perth, with 1,200 ewes and 220 suckers cows. They are impressed by the way Ed has become involved with their business.

“He has changed the way we work with a vet. We are now a more organised business rather than fire-fighting problems,” says Neil.

They are members of Ed’s flock health group, which can help them benchmark their business.

The McGowans run 1,100 Lleyn and 100 Texel ewes, selling about 100 young rams a year and buying in one of two rams, so biosecurity is very important to them.

“Anything coming onto the farm is now tested to prevent diseases such as CLA and OPA entering the farm,” Neil adds.

“Ed has a real focus on profitability and productivity in his specialist area and is building trust with his clients, which is especially important for a young vet.”

The judges liked…
• Very enthusiastic and knowledgeable and works well with his clients
• When something goes wrong, he is keen to go the extra mile to solve the problem
• Covers a very diverse client base, from hill flocks to small pedigree flocks