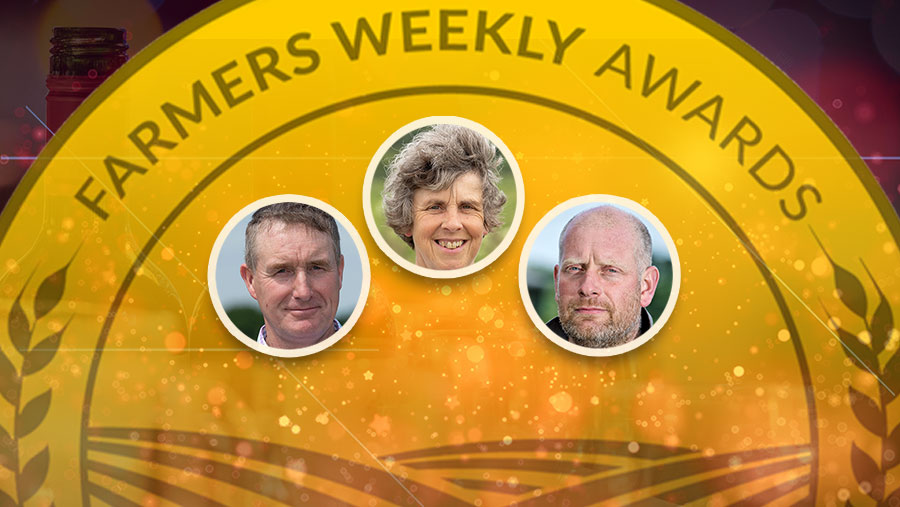 Balance was a strong theme this year – all finalists were finding an optimal point between work and rest, milk output and quality, and technical performance and costs.

The judging team visited each of the finalists for a three-hour interview and tour of their systems.

See all of the category finalists for the 2022 Awards 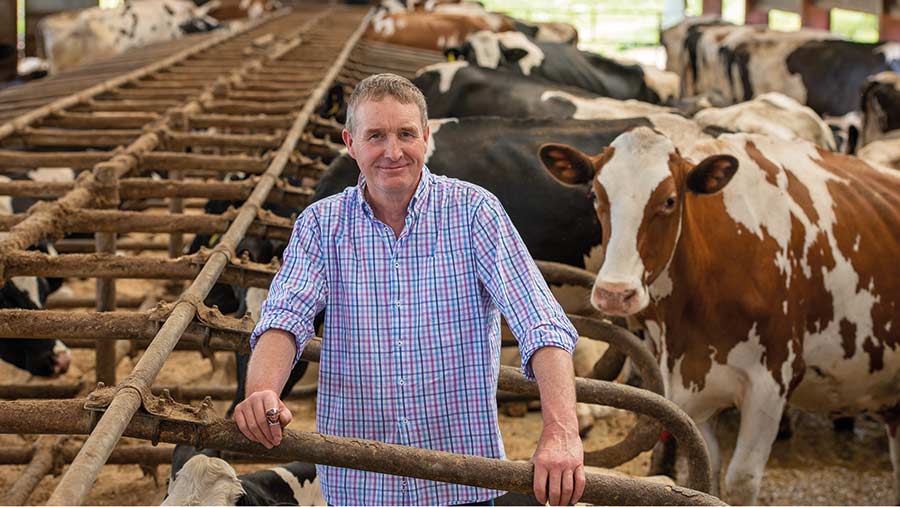 A biomass boiler installation, barn conversions and a host of other renewables projects have been executed while expanding the herd from 200 to 350 milkers since 2012.

A new parlour and a cow shed have been built, and more land has been bought.

The Bryn Mawr team has maintained high standards through a challenging period.

Kevin lost his father Glyn – an active business partner – in 2020 during the Covid-19 pandemic, and because of probate had to manage cash flows with no Basic Payment Scheme for two years.

A decade of genomic testing has minimised bull calves, ramped up genetic gain in heifers by targeting sexed semen at the highest merit animals, and improved beef calf value through targeted Blue, Angus and Shorthorn inseminations.

This has reduced haulage costs and increased margins through feed cost control.

This suits cheese contracts and rewards the business – with fat and protein the drivers of milk price.

Soya is being phased out in favour of rapeseed, and fat has been cut from the diet completely in a bid to cut costs.

Energy bills are controlled by using a 10kW solar generator, installed in 2007.

A heat recovery system takes heat from cooling milk in the parlour to warm milk for calves, which are fed on an electronic identification (EID) automatic mixer/feeder.

Variable-speed vacuum pumps save electricity in the parlour, while water is pumped from a spring on the farm for the herd, and harvested from roofs for parlour cleaning.

Further costs have been saved on diversifications. The old brick cow sheds have been converted into residential and holiday lets, heated by a biomass boiler.

Full-time staff are Kevin, his wife, Ann, his son, Richard, and herdsperson Janet Fowles, backed up by five part-time staff.

Ann oversees youngstock rearing, farm accounts and payroll, while Richard shares artificial insemination responsibilities with Kevin and does most of the tractor work.

The Joneses value good staff highly. Morning milking was moved to 2am to fit in with a part-time staff member’s shift pattern, making it the dairy’s first collection of the day.

“We have employed another early milker who has retired from the aerospace industry and wants to work at that time,” explains Kevin.

Janet has been at Bryn Mawr for more than 25 years, two part-timers have done more than 10 years and calf rearer Rachel Dickinson started two years ago.

Kevin is part of the AHDB Udder Group and enjoys discussing cow management with other farmers.

A further 15kW of solar panels will be installed this year to further reduce the farm’s electricity bills.

A trailing shoe system has been ordered for the slurry tanker and a new slurry pit, half a mile from the farm, will be built this year to umbilically spread slurry on a 40ha block of arable land and so mitigate nitrogen costs.

Other plans include a new youngstock and storage shed to maximise genetic potential, and to get Richard, 23, into the partnership.

An eye for breeding and the early adoption of genomics has developed a superb herd for the Jones family. Conscious efforts are made to limit exposure to volatile protein and fertiliser prices. 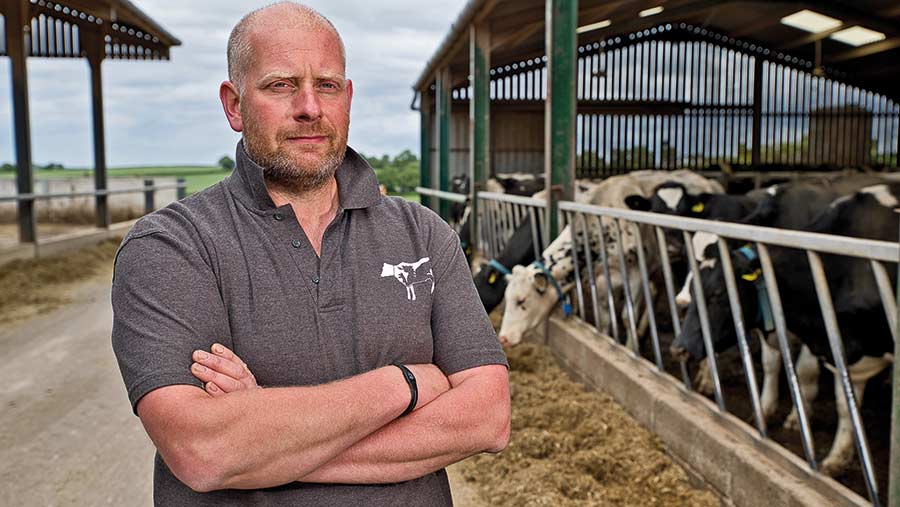 Aled became a business partner aged 19 and was expanding the farm with his father, Elwyn, who passed away on New Year’s Eve 2006, when Aled was 29.

With his mother, Morfydd, and his wife, Joanne – both fellow business partners – Aled continued the expansion.

A mission to cut costs from the ration has seen fat reduced from 300g a cow a day to 200g, and blend dropped from 5kg to 1kg.

The blend reduction alone will save £12,000 this winter, to be replaced by caustic wheat and rapeseed meal as protein sources.

Energy costs have been controlled through an 80kW wind turbine which produces 160MW a year, earning 17.31p/unit for the farm and insulating the business from energy prices.

Feed costs have been saved by grazing up to 120 low-yielding in-calf cows, giving 30 litres or less, outside day and night through the summer on a 21-day paddock-grazing platform.

Grass is plate-metred and data is stored on AgriNet. Silage is baled for the youngstock unit when covers get too high, at about 11MJ/kg of dry matter.

Machinery costs are shared with another family member, farming six miles away. All cultivation, silage, slurry and fertiliser spreading work is done in house.

The Morrises employ three full-time and eight part-time staff. Aled strives to give full-time staff responsibility and specialisms, to keep them motivated and get value for the business.

Herdsman Owen Davies has been given autonomy over grassland management. Chrissy Jones has been on the farm more than three years and oversees youngstock management.

“I try and keep people progressing, with vet courses, foot trimming training and other levy board initiatives,” explains Aled.

The aim is to run a 60-hour week with at least one day off a week, every other weekend off and 28 days holiday a year.

The focus is now on holding numbers and focusing on the technical performance of 500 cows, with a view to hit 10,000 litres a cow and 5m litres sold a year.

Aled aims to produce another 800 litres from forage, taking milk from forage to 4,000 litres or 40%, by using more maize and less wholecrop wheat and producing more consistently good grass silage of 11.4ME.

Genomic testing has been used for the past five years and will continue to drive genetic improvements in the herd.

Aled is keen for his daughter Beth, 8, to continue enjoying the farm. Beth has already surpassed her father at showing calves and spotting calving cows, he explains.

With a passion for driving the business on, trying new methods and developing staff, Aled is a great example of a progressive dairy farmer. He is closely watching costs and monitoring cow welfare. 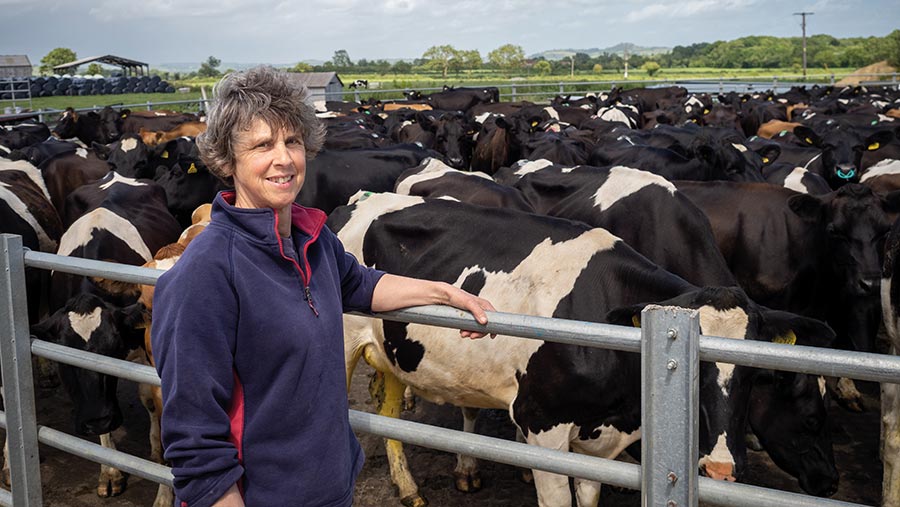 Spring block calver Catherine Pickford has tried most systems, and has settled on a low-cost approach that allows her to develop a young team of workers.

She is in the fourth year of a 10-year farm business tenancy at Alford Fields. She grew up on a dairy farm but moved when the parlour needed replacing and the estate did not want her to invest in the farm.

She started farming in her own right in 1995, on a farm business tenancy as she did not qualify for an Agricultural Holdings Act tenancy.

Initially, she milked 80 Holsteins in an all-year-round system before trying to address costs by switching to block calving in 2003, and then to once-a-day milking for the past five years.

A loan was secured to install a parlour, collecting yard and grazing infrastructure when she moved to Alford Fields in September 2018.

Housing costs are minimised by outwintering half the herd on stubble turnips and forage rape with hay and bales. The remaining lower-condition cows are housed on loose bedding and fed silage and hay.

Reseeding is targeted at wintering fields and the lowest-producing pastures – according to weekly plate metre readings – and about 70% of the farm has been reseeded.

Catherine’s passion is to nurture young talent. She is helping herd manager Nathan Crocker to build equity by buying cows in her herd.

Nathan bought 20 in-calf heifers when the herd moved farm, and he now owns 25 cows and about 25 youngstock.

Catherine covers the cost of calf rearing and then charges Nathan £900 across 22 months to buy an animal outright, so it is owned by Nathan when it calves, at which point Catherine rents the cow back.

“I try to encourage and support young staff to progress through the industry by making it an attractive career,” she says.

However, Catherine has encouraged Tiffany’s plans to travel to New Zealand, so in September a new apprentice will be taken on to cover this role. There are three other part-time workers.

The aim is to work 40-45 hours a week – barring the first six weeks of calving – with two days off.

Staff are all on a salary, which keeps pay consistent despite the seasonal nature of the work. The team are encouraged to get involved with quarterly consultant meetings to give their opinions and discuss husbandry and grazing.

Catherine is willing to support Nathan if he farms in his own right, beyond her tenancy ending in 2028.

By this point the loan will hopefully be paid off, and Nathan will have built up sufficient equity in the herd to start buying Catherine out of the business.

Catherine has mastered a simple, low-cost system which allows a good work-life balance to attract young people into the industry. She manages to nurture staff and encourage them to learn.

“We recognise and celebrate the hard work, dedication and skill involved in running a successful dairy business with the many challenges the industry faces.”