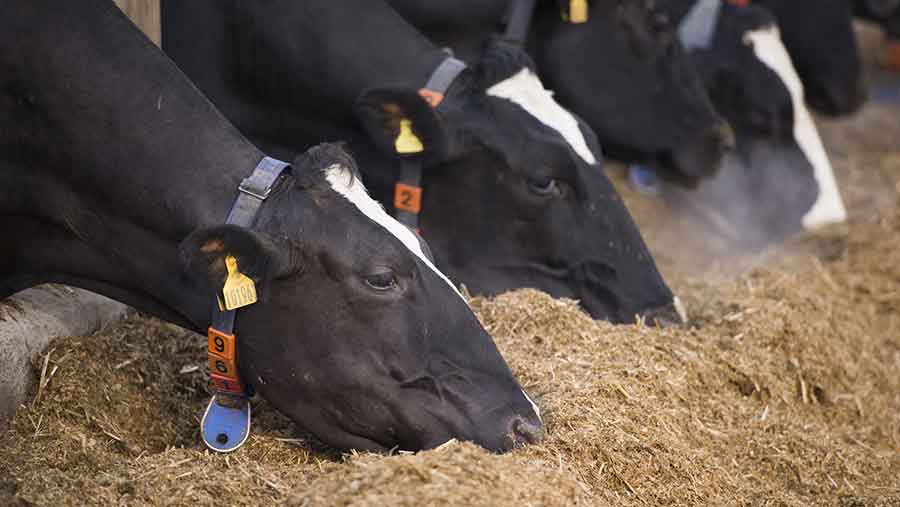 A twofold increase in caustic soda prices has forced many dairy units to reassess dairy rations ahead of harvest.

Depleted stocks of the chemical (sodium hydroxide) has doubled the cost of treating wheat as “soda wheat” from around £13/t last year to around £25/t, leaving other alkalisation processes looking “favourable”.

Feed industry experts believe the price increase of caustic soda – up from around £450/t 12 months ago – is due to China and Indonesia using up their own stocks and a weaker pound.

Any available caustic soda is costing around £1,150 delivered, with traders tentatively expecting an August price of £800 to £900/t and one of two FEMAS (Feed Materials Assurance Scheme) accredited suppliers currently running a three-month lead time.

He said an approximate farm-treated price of 21.9p/kg for caustic wheat meant another alkalisation product was competing at around 22.5p/kg.

With help from Tim Davies, Kite Consulting, and Hefin Richards of Profeed

Mr Gould said: “People in the markets say sodium hydroxide supply is showing no signs of catching up to meet demand. Further price increases are being intimated and the cupboard looks bare across Europe. Many farm suppliers have restricted sales to one pallet at a time.”

However, with ground maize available for £195 (£22/t DM), he said it looks better value than caustic wheat at today’s prices for rumen stability.

He added: “Alternatively, consider other ways of treating wheat, such as ammonia treated wheat either urea treated, or with one of the proprietary products or crimped wheat.

“Whichever option you look at, always look at the alternatives on a tonne of dry matter basis to level out the effect of moisture, as well as the other attributes of the finished feed.”

Businesses looking at abandoning caustic wheat should consult with their feed advisers about the varying moisture levels in grain and how to best too add cereal to complement the farm’s ration, according to Richard Webster of Richard Webster Nutrition.

Several options are available, with soda wheat offering the option of being harvested earlier but alkalisation alternatives (Maxammon and Alkagrain) offering a protein lift of 3.5-4% or more, he added.

“Cereals for alkalisation via ammonia treatments are typically harvested close to maturity at around 80-82% DM,” Mr Webster said.

He added: “Caustic treatments also use mature wheat but water is added to around 65% DM. Alternatively, wheat can be harvested a few days early, at around 65% DM, crimped and inoculated with a crimping additive which costs £3/t and stored as an ensiled fermented cereal.

“Even with crimping costs this will be less than half or a third the cost of alkalising and ammonia treating wheat but will be lower in protein and will tend to reduce rumen pH more.”

David Keiley of Kite Consulting said farms will need to bruise grain as part of the alkalisation process and should seek advice when sheeting grain.

He noted that alkaline treatments need about three weeks to be preserved, unlike caustic cereals which can be fed immediately.

“Care when stacking the cereal is important. Do not create a heap over 2.5m in height or compact the treated grain – this will allow the ammonia gas the move through the heap and treat the grain effectively. Then cover with a top sheet,” said Mr Keiley.

“The sheet should be removed after two to three weeks to avoid excess condensation and waste on the top six inches of treated grain.

“Some farms have used caustic for years and use a standard 17-18% moisture wheat, adding water to it for the caustic treatment. Alkaline preservation products will need a slightly lower moisture content with a more mature grain.”

Mr Keiley said ensuring homegrown starch sources and forage is used with no waste and to their maximum potential is important given Kite figures showing average debt per cow on farms now at about £2,700, up from £2,365 last year.